After returning from the beach on Sunday afternoon, Jacob suggested we give Wizard Kings a try. I love the block game format and picked this up on eBay with the hope that Jacob might be drawn to it because of the theme. We played a short introductory scenario with just two boards and with the standard armies supplied in the basic game 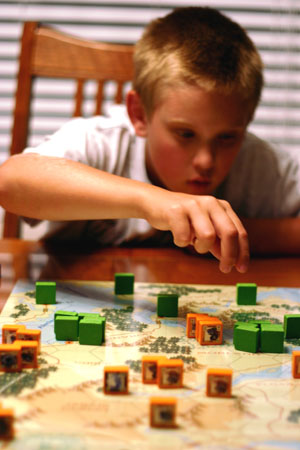 The rules were very easy to learn (Jacob taught me this time), especially having just played Gettysburg: Badges of Courage which has the same basic mechanics but is quite a bit more complex. Jacob is still learning some of the basics of strategy and tactics with these block games and is a bit too aggressive in his attacks. I pummeled him pretty hard just sitting back and defending, then built a dragon and started swoopoing into his cities and cutting into his production. I won very easily but I'm sure he'll give me a stronger match next time. Thumbs up on this one and I look forward to trying this with some more chaos units mixed in.

Last Tuesday night I hosted the RipCity folks as part of a new rotation we are doing. I argued for some more events on the southwest side (mostly Mike Deans and myself) and for some mid-week choices besides Thursday. Of course this means I need to get on the hosting rotation which I'm happy to do, though scheduling can be tough with my travel schedule.

Doug, Mike, and Jake joined me, and Doug suggested and brought Candamir. This is a Klaus Teuber game set in the Settlers of Catan universe, but it borrows very little from that series other than some trading. Of the games I've played lately this is most like Runebound - a sort of role-playing game where you build up your character by going on quests and collecting goods.

There are some nice elements to the game - the theme is interesting and it was nice to see a game like this not set in a typical dungeons and dragons universe. There are some strategic elements to the game as players can compete for dominance in certain areas on a main board which allows for some longer-range planning (but not much) and light tension, but overall the game was too long. Maybe it is better with three players (I had exactly the same feedback on Runebound and would never play it again with four players). I think everyone was ready to be done with an hour still left in the game. Downtime isn't terrible but can be a factor, and it is much harder to "pipeline" player moves in this game than it is in Runebound (we always play with the next player making his dice roll right after the current player chooses his move). 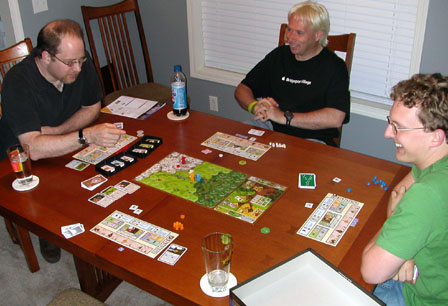 There is also very little player interaction in the game despite the ability for players to trade with each other. The game has great production elements though and I'd like to try it again with only 2 or 3 players to see if it can be played in 90-120 minutes (our game took about 3.5 hours). In this genre, however, I think I prefer Runebound.