After returning from my trip to Israel, and thanks to a rare lack of scheduled baseball games, we worked in a weekend out at the beach. The weather was spectacular, giving us the opportunity to take a hike up at Drift Creek Falls and spend some time at the tidal pools below the Inn at Spanish Head. 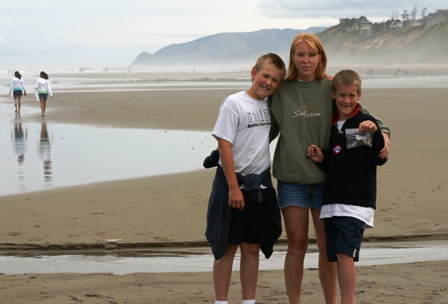 Jacob, Julie, and Matthew on the beach.

This is a great beach for agate collecting and searching tide pools for critters. It usually best to go at very low tides. Speaking of critters, there were a ton of sea stars, hermit crabs, sculpins, and anemones in the pools. 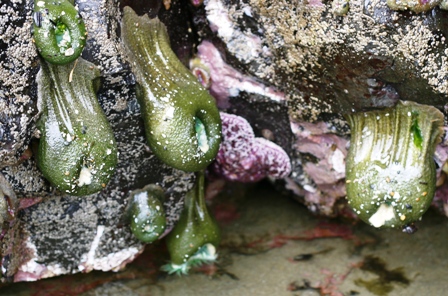 This was a particularly cool scene - drooping anemones clinging for their lives.

I brought out a few games to try, including the new release Caribbean. Jacob, Matthew and I gave it a try one of the mornings. 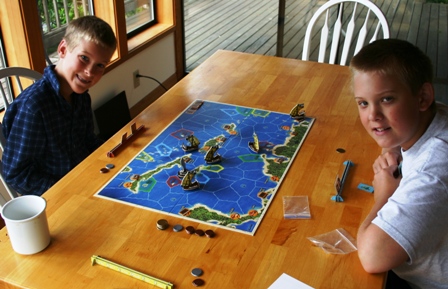 Mathew, Jacob, and I giving Caribbean a try.

My reaction to the game was "eh", but Matthew and Jacob were pretty fond of it. Players vie for control of a fleet of pirate ships trying to steal booty and deliver it to safe havens; you control a pirate by making the most substantial bribe of rum to a ship. Each player starts each turn with same available set of cards and allocates each one (numbered from -1 to 5) to a particular pirate ship. Obviously the higher number gives you a better chance of influence that ship. The number played also determines the number of spaces that ship will be able to move. This is where the -1 tile comes in - you can't win influence when you play a -1, but you subtract one from the movement for that ship. Points are earned by picking up treasures and by delivering them to your own safe haven.

I found the game a bit too chaotic and I've never been too wild about the try-and-outguess-everyone-else mechanic. However, it played quickly (about 40 minutes) and was some good light fun, so I'll definitely play it again if the boys ask for it.