Tonight I had a conversation with one of my oldest friends, David Oppenheim. It is unfortunate, but true, that sometimes it takes tragedy (in this case, the passing away of a mutual friend's mother) to bring old friends together for a conversation.

David was my best man when Julie and I married almost exactly 14 years ago (May 18, 1991). We grew up together in Indianapolis and stayed in touch throughout college. During our senior year we started chatting about spending the summer after graduation in Europe. We pulled it off and spent 13 glorious weeks in 13 different countries. David and I couldn't have been more compatible and at least once or twice a year I pull out the photo album and journal of our adventures.

One of the highlights was the timing of our visit to Berlin. You may recall that 1990 was a year of radical transformations, including the opening of much of eastern Europe and the disintegration of the wall. Partly to celebrate the pending reunification of Germany (oh, and we were also in Germany when they won the World Cup that summer), Roger Waters put on his star-studded The Wall: Live in Berlin concert. We arrived in Berlin a couple of days before the concert, toured the city and spent some time around Potsdamer Platz (this used to be in no-man's land) watching the crew setup the show.

We were staying in a youth hostel and had reservations on a train leaving after the show, around 2am or so, for Belgium. We needed to stash our backpacks the morning of the show, and the common approach for backpackers is to check them into the large lockers in the train stations. Unfortunately, we couldn't find a single available locker in West Berlin. This meant heading over to East Berlin to try the same, and fortunately we found some space there.

Our tickets for the concert indicated that we needed to enter on the West Berlin side of the platz. We were already right next to the platz, but on the east side, so on a whim we decided to see if there was an entrance we could use there. I think the gates were going to open around 11am or so, but we were trying to get in line around 8am. The attendant at the east gate indicated that our tickets would be just fine there and that we shouldn't bother going around. This was good, because "going around" was still a pretty big deal logistically at the time. There were about 200-300 other people hanging out at this gate, and we were right up at the front.

Meanwhile (we didn't know this at the time), at the other gate there were well over 100,000 people waiting to get in. They opened our gate moments before the other, and David and I sprinted into the plaza to find that we were the first two people to enter the concert area. We continued to run, taking our position in the front center of the audience. We ended up have to stand, crowded by the other concert goers, for something like 8-9 hours before the show started.

So, how can I prove that I was truly in the front? Here's a screen capture from the DVD - just go to the 1:45.52 mark during the final song when they pan the camera to the front of the audience. 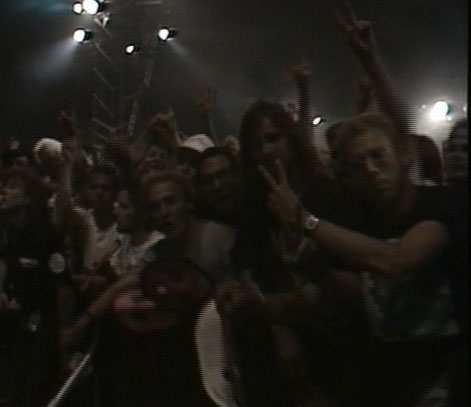 That's me on the right giving the peace sign. David is two heads over to the left, next to the dude with the long hair that my hand is covering. In my right hand I'm holding the traditional "The Wall" pink mask.

Someday I'll scan in some of the photos from this trip, including the snapshots of the crew building the wall the day before the show.