Matthew's baseball tournament this weekend was cancelled, leaving some time free on Saturday to join the RipCity folks for some gaming on Saturday. Eric was hosting (read his session report) and though we were expecting four to show up, Mike got hung up at work so it left us with just three (including Dave). We batted around a few ideas, but when Eric suggested one of the Age of Steam expansion maps (Scandinavia) Dave and I gave our approval. Age of Steam apparently isn't the best game with three - I wouldn't know as I've only played twice and both times with at least four players. This is a smallish map so seemed like a good choice for our small group. 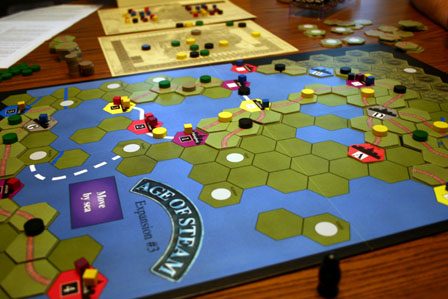 The Scandinavia map for Age of Steam. The white lines are sea routes and cost $6 to build.

The Scandinavia map introduces a few new special rules that make sense in this seafaring area: 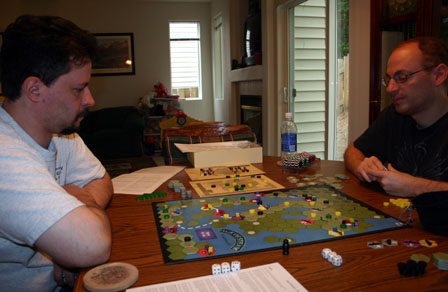 Eric (green), Dave (yellow), and I (black) about midway through the game.

The game was close in the early going, but Dave pulled away significantly around mid-game, pulling out several 4 and 5-segment shipmens over consecutive turns. I kept myself close only by being a bit more conservative in issuing shares, but Dave was just too strong and pulled out the victory. Scoring was fairly evenly distributed, with Eric finishing in third.

Next up was Oltremare, a game I had been hoping to play since back in January. Eric did a fine job explaining the rules, calling out some similarities with Bohnanza while explaining the specifics. 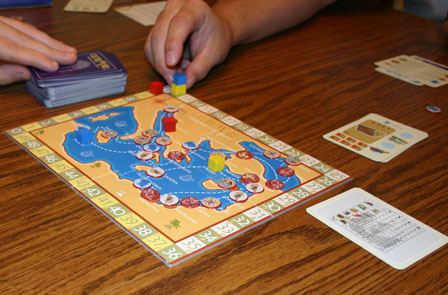 The mini board provided with Oltremare. This is mostly a card game - the board is there to provide a scoring track plus a depiction of the travel routes players follow to pick up special tokens.

It took the whole game for me to start to figure out the economics of card management. There are a number of conflicting priorities in the game that need to be balanced: you want to collect the right sequences of cards in your cargo deck to score points in the endgame, but those same sequences of cards do not always provide the best mid-game payout. In particular, you need to keep a steady flow of cards coming into your hand (or at least plan for an ebb and flow - I had too much ebb). Eric won with a healthy advantage, I finished second place. Scores were 60-51-40. I look forward to playing this a few more times - should be a good lunchtime play.