I managed to be in the office again for some Friday lunchtime gaming, and we decided to try Acquire again. Eric was in Columbus for a minis tournament, so it was Paul, Arron, Jason, and me. The last time I played Acquire, I managed to be in on just about every deal and ran away with the victory. This time the near opposite was true and Jason and Paul fought it out hard for 1st place with Jason coming out on top. I was easily in third place most of the game, but Arron started showing hints of crying again so I eased up a bit and even managed to slip him some of my stock mid game so that he would get a few majorities and not embarass himself again. Thankfully he finished 3rd, slightly ahead of me, and we avoided a difficult tantrum.

Most of Saturday was spent playtesting some of KC Humphrey's game designs. At the end of the day we had about an hour to play some of the new games purchased from and hand-delivered by Tom at Boards and Bits.

Doug and I sat down to try the newish Lightning D-Day from Decision Games. This is a two-player card game somewhat reminiscent of Battle Cards: World Conflict. I've heard some great reports on this game but so far I'm not terribly impressed. The rules are vague in many places, though reading the FAQ online is helping a bit. They certainly could have used some of the white space in the ruleset to further explain how action cards work and talk through more examples of play. I'll need to play this a few more times before passing judgment. 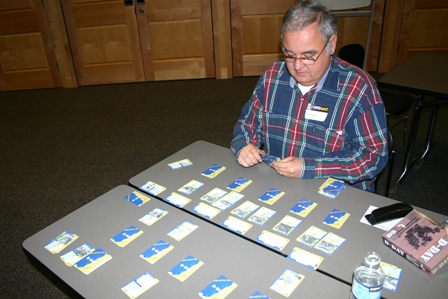 Doug faces off in Lightning D-Day. He played the Axis, I was the Allies.

At the same time, Mike, Bill, Greg, Tom, and Jacob gave the new Cathala/Faidutti game Boomtown a try. I don't believe they finished the game, but everyone appeared to be having a good time and Jacob is anxious to play again. 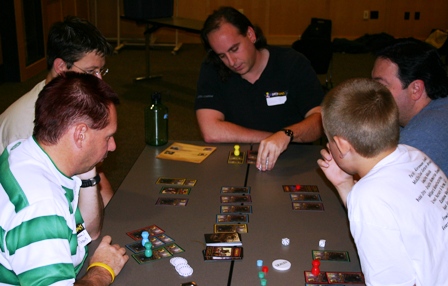 Not much gaming action today as Julie and I spent most of the day catching up on some personal work. Late afternoon as I was putting some games away in the closet, I asked Matthew to try out Buyword. This is a Sackson design published this year by Face2Face games and was the winner of the 2005 Games Magazine Game of the Year. 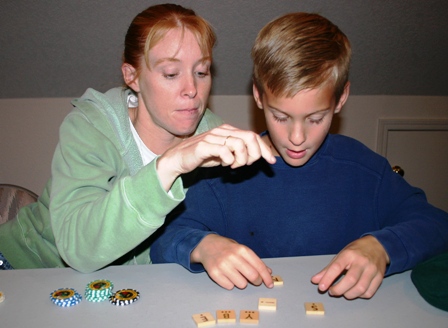 Julie helping Matthew out with his letter tiles.

First, a comment about the quality of the components. Like others, my box came without the scoring table, the money was scattered throughout the box, and many of the letter tiles were stuck together. The quality of the printing finish on the tiles is also not consistent. The box and the letter bag are first rate though.

This is a great word game with a very creative mechanic. Players buy letter tiles in groups of 2-5 depending on the die roll, and they pay the square of the sum of the “pips” on the letters they buy. Letters that occur less frequently (think J, Q, and Z) have more pips. So if I draw 3 tiles and there are 8 pips on them, then I pay $64 to get the tiles or discard all of them. After buying the tiles, you then have the opportunity to form a word, scoring (you guessed it) the square of the sum of the pips. This is a “buy low sell high” game and there are some tough choices. If you like word games pick this one up - I think it is right up there with Scrabble and Boggle.