I took off for the east side of Portland to help Rita setup for a games playtest day we are running today to showcase and evaluate 4 of KC's game (Pizzza, Havoc, Northwest Trek, and Tres Amigos). I'll post a report tonight or tomorrow on how things go today.

After setup, I joined KC, Rita and their kids along with Jeff and Jason, who drove up from Medford, for some Thai food. Afterwards, we hopped over to KC's home for some gaming. I requested something shorter so I could get back home across town at a decent hour, and KC suggested we try his new design, currently named Metro 2. This game is an extension and rework of the fine Dirk Henn game Metro. 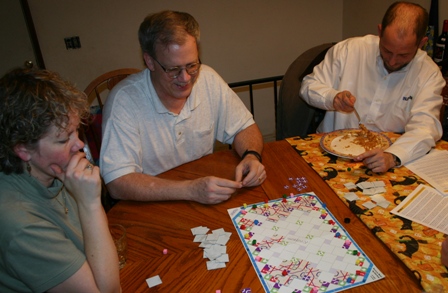 KC happened upon the design while working on a square-tile variant (as opposed to the original cairo-tile design) of his tile placement game Northwest Trek. This variant uses offset squares, leaving smaller squares distributed throughout the board (see the closeup of the board below). 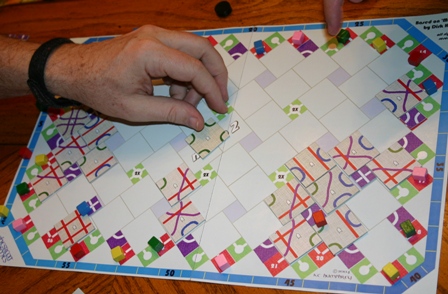 Closeup of the Metro 2 board.

These smaller squares either represent 2x ending points (like the central station in Metro) or, if blank, waystations that can be built out as the game proceeds. These waystations provide both a way to score more points and diminish the points earned by your opponents. The geometry is also quite a bit different than the original metro, allowing the potential for head-on collision's (only allowed at the end-game if there's no other option). Everyone that played enjoyed it, though it is a bit more cut-throat than the original game. I think this is a positive as it leads to a bit more player interaction than Metro.