Time to catch up on a couple of session reports.

Last Saturday KC and Rita came over to discuss some planning for the upcoming playtest days we are running in November to further develop four of KC's games. We also managed to sneak in a few games.

Ken joined us for a game of Keythedral, a game KC recently picked up that I had been wanting to try for some time. We played the Pro Ludo remake, which apparently has better components than the original. I certainly have few complaints about the bits - this is a nice looking game. I do wish they would have used numbers and letters for the order and phase pieces - it was always confusing to me what was happening when. 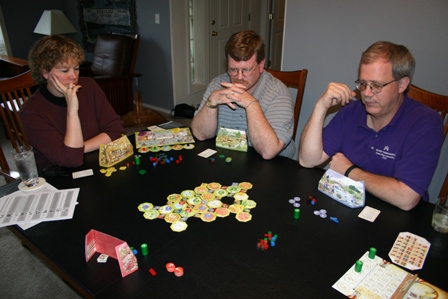 Rita, Ken, KC and playing Keythedral. KC made some great player aid screens to use in this game.

I'm going to reserve judgment on this game until I play it again as my first experience wasn't too great. Similar to Settlers, I think that if you make poor choices at the beginning you might be out of running for the rest of the game. That's the situation I found myself in, but it was still fun along the way. Ken edged out KC in the end, with Rita and a distant 3rd and 4th.

Ken had to leave so I suggested we play St. Petersburg, which plays nicely with three players. KC was an old hand at this game but Rita hadn't played yet. KC got off to a great start with a first round Mistress, which can make it real tough for the other players to keep up. Some even consider this card broken. 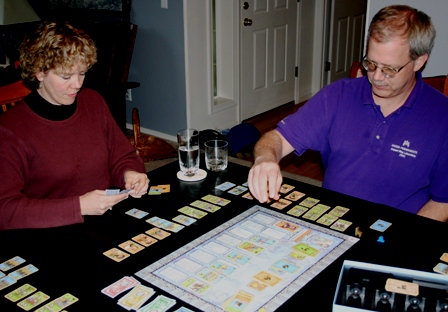 Rita and KC about mid-way through St. Pete.

I tried my hardest, but made a crucial mistake of not buying some victory points with my market the penultimate turn (I had plenty of cash leftover), which allowed KC to pull out the victory by less than 10 points. Close game, lots of tension. I still like this game.

Julie and Matthew took off for Salishan on Saturday afternoon after Jacob's football game. Jacob and I strategically planned out the next 24 hours:

We elected to play Empire Builder, the classic crayon rail game re-published by Mayfair Games. I picked it up on the cheap from Toys R Us / Amazon. The rules are exceedingly simple so we were off and running in no time. Fortunately I had already taken the time to apply the multitude of stickers on the load counters.

Jacob and I played very cooperatively - it took a while for him to grasp the importance of not running out of money and maximizing his load and payoff potentials. Well, not too long, because within about 10 turns he was starting to take the lead and had set up a strong network. 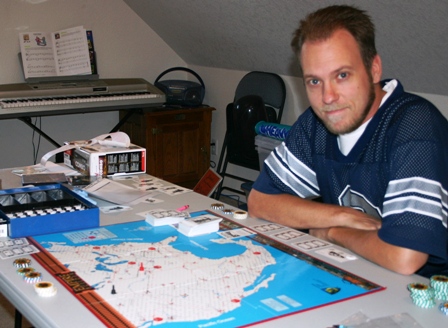 I let Jacob take the picture this time (obviously). We use our handy dandy poker chips for money instead of the monopoly money. We prefer to play with open cash.

I opted for a primarily north-south route from the start, originating my line in Mexico City. Jacob was east-west and had a good network from NYC to Seattle early on. In the end Jacob was able to capture the victory, surpassing $250MM while I was at about $230MM. Close game with some real tension at the end.

This game won't appeal to a lot of people - it is a thinking game that requires serious planning and can be a brain burner at times. It is also a mostly solitaire game - very little player interaction with the published rules. I think it would be interesting to try out the more competitive public-locking rules that introduces some competition for contracts.

Jacob is looking forward to playing the more complex but thematic Iron Dragon, so expect to see a report on that sometime in the near future.