I've got a bit of gaming to write up. If BGG is back online by the time I finish this, you'll find links to the games. If not, well, I guess you'll know why there aren't any links.

On Friday I was able to participate in some lunchtime gaming at work. This was the first Friday I'd been in the office for three weeks and it was nice to take a break during what was otherwise a very busy week. Jason, Paul, and I got in two games: La Strada and Metro.

La Strada is a great game to play over lunch - short duration, easy to teach, and the decisions are never too difficult (hence little downtime). This game was tight - Paul looked like he was in the lead, but on my last turn I took a gamble and connected to one of Jason's markets. This turned out to be the right move, as he and I ended up tied for the lead with me winning by a tiebreaker (5 resources vs. 4). Don't know the exact final scores as we didn't count markets where all three of us reached.

Next I taught Metro (though Jason recalled that he had played once before). Another enjoyable, light game with short playtime but enough depth to be interesting. I believe Paul was the victor in this game.

Friday night the boys and I were home alone, so we took a look at the game closet and decided to pick out an unplayed game - Cosmic Encounter. 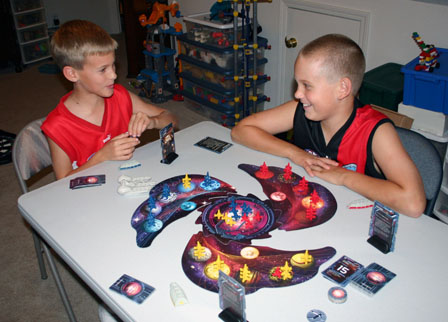 Now most of you reading this have probably played Cosmic before - it has been around for a long time. We weren't disappointed, though we did spend most of the game wading through the rules. I suspect this game will play much differently with adults, especialy when it comes to negotiating outcomes. Both Jacob and Matthew are eager to play again, which is a good sign. They even asked if it was possible to play with more than 4 players.

On Saturday afternoon we drove out to Salishan to do some work on the house and take delivery of some furniture. The weather wasn't very pleasant so on Sunday we got in a decent amount of gaming. Matthew and I played Battle Line a few times; this was a recent acquisition from Boards and Bits. I'm glad this was reprinted, because it appears to be a winner. 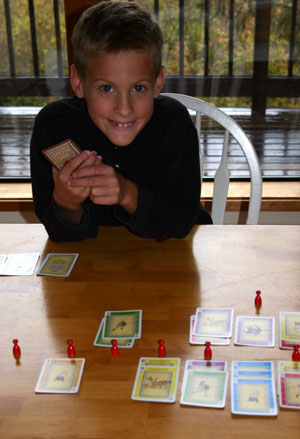 Matthew facing off in Battle Line.

Battle Line has similarities to a number of games I've played recently, including Lost Cities and KC's Havoc prototype. Lots of tension - do I play this card and start a battle? Will I draw the third card I need to complete this wedge? The tactics cards add an additional (but enjoyable) complexity, though in the first game we played we didn't realize you couldn't play another tactics card if you've already played more than your opponent. Matthew enjoyed our plays, though the strategy is a bit much for him (I won both games easily).

Finally, on Sunday morning all four us decided to give Betrayal at House on the Hill. I agree with Chris Farrell's confusion about the name of this game, but I (mostly) disagree with his assessment of the quality of the game. We had a blast! I think our family is definitely in the target market for this game - it is heavy on theme, light on strategy, and there are plenty of opportunities for role playing and general silliness. 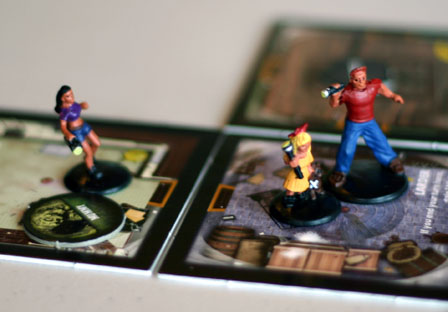 Cool minis in this game. This is near the end of the game - our haunt was #1 - The Mummy. Julie's character and the mummy are chasing Matthew's character, who is escorting the girl. Unfortunately, the good guys weren't able to save the girl-bride from the mummy.

Players choose, or randomly draw, a character play. The game happens in two phases: pre-haunt and post-haunt. Pre-haunt, everyone is hanging out, exploring the house, gathering items, and waiting for really bad stuff to start happening. As more omens are uncovered (cards drawn at particular rooms discovered randomly), the odds of the haunt starting increase.

When the haunt starts, the triggering player consults a table to determine which haunt scenario will play out (keyed off of the room and omen). I like this mechanic in that it ties the theme of the haunt into something that happened in the game. Eventually we'll run out of these (or hit a duplicate), but it should have good replayability for a while. Post-haunt, one player is the traitor and all of the others are trying to stop the traitor from achieving her (secret) objective. This is also when the monsters get unleashed, which are under the control of the traitor. The heroes also have a secret objective, and team together to defeat the traitor.

I found there to be a decent amount of strategy and tactics - I certainly didn't feel like the game was playing itself, or that I wasn't able to control any of the outcome. It was disappointing to lose the game to Julie because of a dice roll (I rolled a 5 instead the required 6 to banish the mummy), but we all came away excited to play another one.