This session report spans a week, but I'll but just put down all the stuff I've played at once.

We spent last weekend at Salishan doing some work on the house and getting it ready for some massive reflooring work scheduled the following week. The weather wasn't great so we spent a good deal of time on Saturday indoors, and that meant games. Nice not having a TV or computer handy...

First up was another playing of Robo Rally. I spent some time coaching Matthew this time to ensure that he wouldn't make foolish mistakes programming his robot. This game is hard enough without misunderstanding the orientation and movement rules of your robot! Things went much better for him this time. He can navigate OK himself, but still has some challenges anticipating others' moves and knowing how to hit the targets. 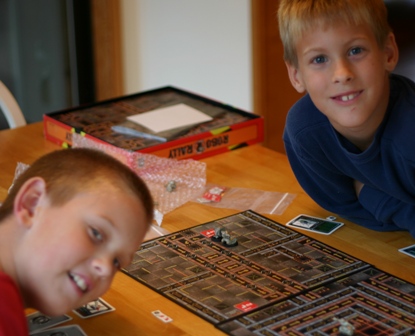 Jacob and Matthew at the end-game of Robo Rally. You can see my robot just in front of Jacob's facing the final target.

Jacob was in the lead for most of the game, but I was able to catch up and pull just ahead of him going into the final stop. If he had been able to keep himself facing me and then drawn a move 2 card the next turn, he could have won by pushing me past the target and landing on it himself. He ended up the turn facing the wrong way, allowing me to capture the win with an easy move 1.

Next up was Colossal Arena, the remake of the Knizia classic Titan: the Arena. The kids had a great time with this one, with Jacob winning easily (I lost my secret bet on the first round!). Everyone I've talked to agrees that the rule where the game ends immediately after the last card is drawn is B.S. We prefer the original rules where you continue playing but with limited hands (i.e., no more draws). 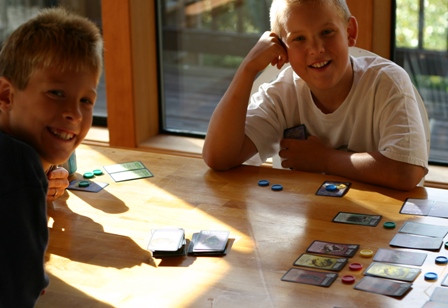 Matthew and Jacob a few rounds into Colossal Arena.

Matthew had been asking to play Lord of the Rings: Risk for ages. I tend to resist due to the playing time (2-3 hours), but every time we get a chance to sit down and play we have a blast. The game usually turns out about the same: Matthew goes down fairly quickly, Jacob holds his own against me for a while, and I end up controlling over half the board by the time the game ends. 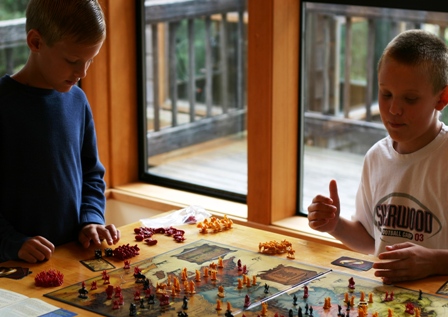 Matthew and Jacob playing LOTR: Risk. Matthew and I each played the dark side, Jacob took on the fellowship role.

My strategy is fairly simple. Focus on taking control of an entire region within the first three turns, don't over-extend myself, and use my leaders effectively to continue gaining the bonus cards. One reason I love this version is the time control which virtually ensures that all players stay in the game the whole time. This changes the focus away from player elimination and keeps it on winning points.

Today after seeing an afternoon movie, the boys and I pulled out Power Grid for our first ever play. I sat down Saturday night to play a few turns solitaire and get the rules down. This helped me come up to speed very quickly - much better than just reading the rules. 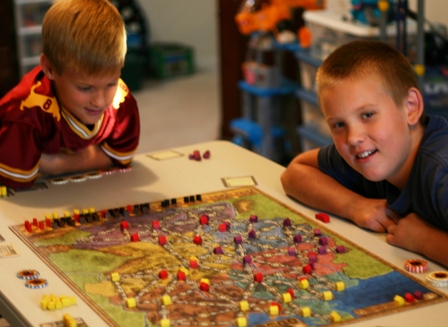 Matthew and Jacob near the end-game of Power Grid.

Both boys picked up the rules of the game fairly quickly. Matthew initially had a hard time understanding the relationship between the power plants he owns and the cities he can power, and everyone was confused with the fiddly rules about the different stages, when to replace power plants in the auction, etc. I think we got the rules right, but it sure is tough to keep it all straight.

Matthew spent most of the game in the lead. Jacob focused on clean energy, at one point having three power plants that don't require raw materials. I tried to pace myself and stay out of the lead but in striking distance.

I think we all bought power plants too often, as we never even had a stage 2. Also, the 8 plants we removed from the game at the beginning (per the 3-player rules) were all high-output plants, making for an interesting end-game where there was a real scarcity of high-output plants. The end was very close: I won with a total network of 16 cities and 20 electros, Matthew second with 16 cities and 13 electros, and Jacob third with 15 cities. Fun game and we can't wait to play again.