I managed to get in a few games this week, both at home with Matthew and at Die Hard Thursday with the RipCity gamers.

Wednesday night, Matthew and I had some 1:1 time during Jacob's football practice, so we decided to give St. Petersburg a try a first play for both of us. I was a bit concerned that the complexity might be too high for Matthew, but the mechanics of this game are exceedingly simple (even if the strategy isn't). Matthew had no problems at all with the game, even rating it a 10 out of 10 (not quite as high as he rates HeroScape though, which gets a 100 out of 100).

I read the rules several times prior to playing so I had a decent understanding of gameplay, but it was particularly hard for me to understand how the game would play out, how many turns it would last, what cards would get discarded, etc. As it turns out, I was in for quite a schooling by Matthew as he took a very basic strategy and ended up beating me pretty soundly. 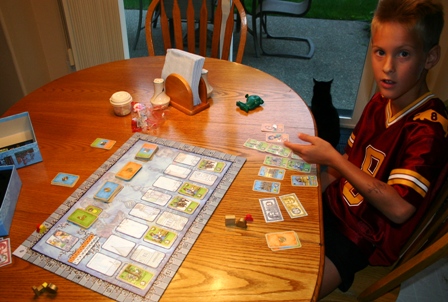 Matthew trying to explain to me that it really is a simple game and that I shouldn't have to work so hard to beat him.

First, let me explain the basic mechanics of the game in case you aren't familiar. There are four types of cards that you can buy in the game, and these card types also match up with the four phases of each turn: workers, buildings, aristocrats, and trading cards. In general, workers generate income, buildings generate victory points, aristocrats generate both, and trading cards are basically upgrades to workers, buildings, and aristocrats. As you go through the four phases, you score the corresponding card types under your control at the end of the phase. So if I purchase two workers in the worker phase, they will immediately produce income for me at the end of that phase.

There are two rows where cards go the first row is where new cards are brought in at the beginning of the phase. Except at the start of the game for less than 4 players, you always refresh the board so that there are a total of 8 cards available for purchase. So at the beginning of the worker phase, if there are four cards on the board (which would automatically be moved to the second row), four worker cards would be drawn and placed in the first row. It is possible that no cards will be drawn if there were still 8 cards on the board, which would happen if nobody took a card the prior phase. There are tokens to mark who goes first in each of the four phases, and these rotate to the left at the end of each turn. The first player takes an action, either draw a card into his hand (to a max of 3 cards), purchase a card, or play a card from his hand. Cards that are drawn into the hand are not purchased they are being held for future purchase. This is a good way to grab a card that you'll want to play later but can't afford to purchase immediately. Play rotates to the left and continues until everyone passes in succession.

The game ends at the end a complete turn when one of the stacks of cards is exhausted. At this time, additional victory points are attained by the number of unique aristocrats that a player holds this is a key path to victory so part of any player's strategy will likely be to obtain at least 7, and probably all 10, unique aristocrats.

I figured this out early, but I didn't have a sense for how many aristocrats were left in the draw pile. I also didn't realize until too late that several had already been discarded. So on the last turn, while Matthew is just buying whatever he could afford (which included some very large and profitable buildings), I was holding some cash in the hope of picking up 2 more aristocrats, and the only ones that came up were ones I already owned! So I ended the game with 49 rubles and lost by about 10 points to Matthew. I'll know better next time.

First up by my request was Puerto Rico. Dave was insisting on not sitting to my left, so Mike took one for the team. ;-) Dave and I started to build the same small market, but our strategies soon parted thereafter. While I tried to make lots of points off my corn glut and wharf, Dave kept up with his factory and harbor. Mike's harbor brought him back in the later part of the game. Chris was following an Office/Factory strategy that resulted in building three large buildings in the end. Final scores: Dave 55, Chris 51, George 38, Mike 37

Dave remembered that Chris had requested Princes of Florence for a while now so I pulled out my translated German copy. Not much to say here as Dave pulled his Jester/Most Works strategy out again to show us how the game is supposed to be played. Final scores: Dave, George, Mike (good comeback), Chris.

I enjoyed Princes of Florence it has quite a few moving parts and I'm still burning some cycles thinking about the game. I wonder if there's a clearer path to victory that stands up over multiple games/opponents than Puerto Rico.