GenCon is now over, it's hard not to be a little saddened by how quickly it wrapped up and how much I hoped to do/see but didn't have time to. No worries; there's always next year and we have plenty of good memories from GenCon 2004. 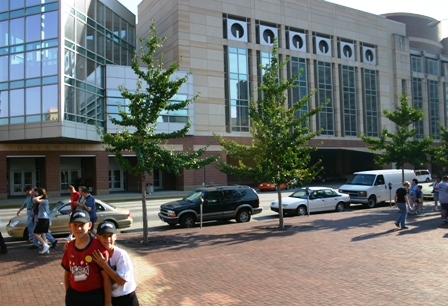 I figured some folks might like to see an outside view of the convention cent er. There's no way to depict the entire size of the place, but trust me it is rather large. We never even made it to the CCG hall, which is supposed to be almost as large as the exhibit hall. 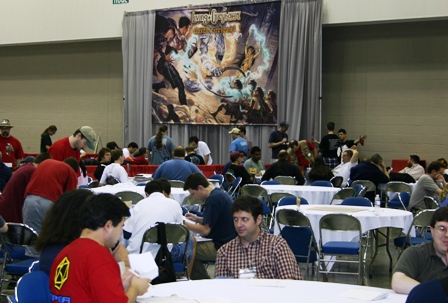 Our only scheduled event of the day was a Living Greyhawk adventure, hosted by the RPGA. It is a bit difficult to describe what these living campaigns are about, but if you are interested I encourage you to head to the Living Greyhawk home page and explore a bit. Think of it as a massively multiplayer RPG without the computers. 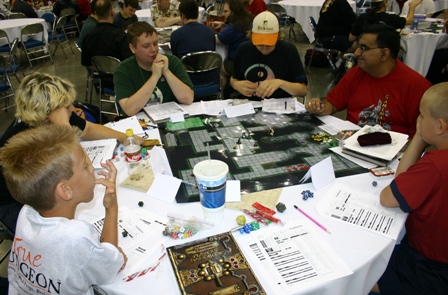 Our adventure was Castle Greyhawk, a module that is designed to handle a wide range of player levels. We created our characters over the weekend, so we were very inexperienced. We joined up with three other characters of similar level to try the ruins of Castle Greyhawk. We had one problem though our party was cleric-less! How can you have a D&D party without a cleric!? So, using the magical abilities of a pencil and eraser, I changed my character from a monk to a cleric in less than 10 minutes. Even though the difficulty of this adventure was tunable to our average player level (APL), it was still quite difficult and we didn't get very far. But we survived and gained some good experience and gold and are ready for our next Living Greyhawk adventure! Matthew was a bit disappointed he had fun, but in comparison to the awesome time we had playing BESM / Groundhog Recess, this was a bit of a letdown. 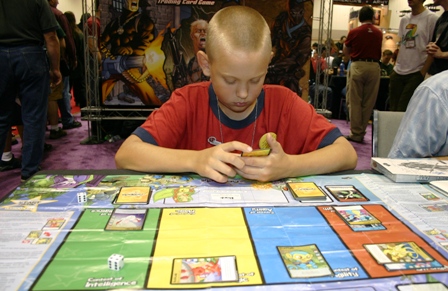 Jacob, Matthew, and I sat down for a demo of the Neopets TCG. I wasn't impressed at all, but I suppose it could be a solid entry-level game for young children who you'd like to get adicted to money-sucking hobbies like CCG. Is this a good thing? I think Pokemon and Harry Potter are much better intro CCGs, and play very well with starter decks. 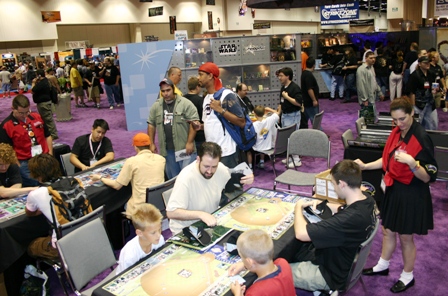 One hit for the three of us was MLB Showdown 2004. I grew up playing tons of APBA Baseball, so this game was right up my alley; we are all baseball fans as well. They've done a nice job simplifying the learning process, with a very simple intro game with little strategy leading to the advanced game where meaningful decisions can be made (stealing, advancing for an extra base, relief pitching, etc.).

For some reason I had a hard time convincing Jacob and Matthew to try out Heroscape, the miniatures game from Hasbro with configurable terrain. The game is very easy to learn and has a number of scenarios included. Most of the game is combat with miniatures, but the quality of the components and the variability of the different figures is very appealing. This was too big to purchase and carry home, but this is a likely acquisition for us. Perhaps a birthday present for Jacob? 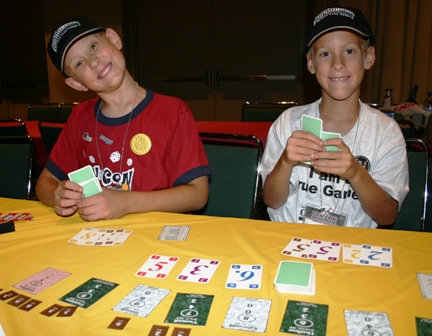 As the convention drew to a close, we had about an hour of free time before driving to the north side for dinner with family. I decided to break out Havoc, the new prototype card game designed by KC and teach it to the boys. We had another boy join us and got through about 1.5 games. Everyone enjoyed this poker/rummy style game very much. 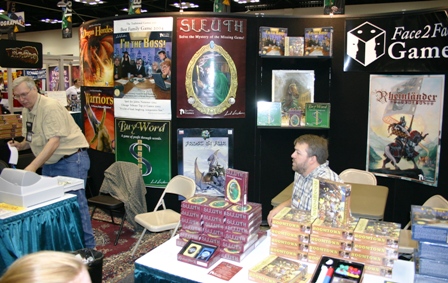 Here's a shot of the Face2Face games booth. They have some interesting new titles out that I haven't yet had a chance to play. They should make their booth more demo-friendly! 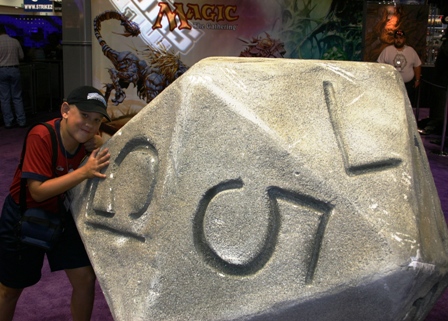 Here's Jacob getting ready to roll a giant d20. 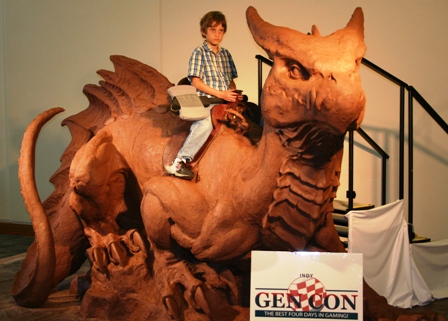 This is a cool dragon that was built during the show starting from the ground up. Sort of a paper mache thing with chicken wire.