Quick session report this time I'm in Sun River with the RipCity group and got a bit behind. Gotta catch up so that I can start posting photos from the weekend!

Last Sunday morning, before the finale of Jacob's tournament, he and I sat down to play a couple of new games for us: O Zoo Le Mio and Alexandros.

O Zoo Le Mio came out first and was our favorite. A fairly light game, it is reminscent of Carcassonne and other tile laying games. Players are in charge of building out their own zoo by laying tiles and trying to make attractive exhibits to steal visitors away from opponents. 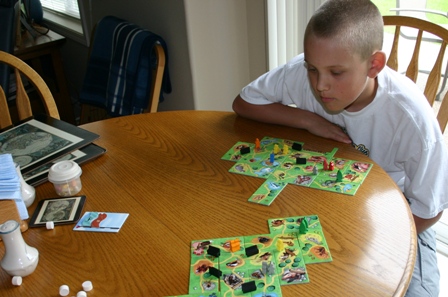 Exhibits become attractive by having adjacency with others of the same type. This isn't always easy because of tile placement rules. When your attraction has the most stars, you attract two visitors. Second place attracts a single visitor. These visitors, along with adornments like park benches (created when you enclose an area with a path) and trees (awarded to the players with the most and second-most shrubs), score points at the end of five separate scoring rounds. 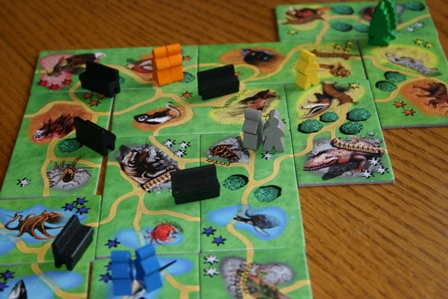 Beautiful bits in this game.

Jacob got off to a strong start, but by the final rounds I was ahead. Given that each round successively scores a multiplier (first round 1x, second 2x, etc.), I finished pretty far ahead. This game was a blast and would probably be even better with three or four players.

Alexandros, on the other hand, will take a few more plays for me to decide if it is a keeper (I got both of these games for 50% off so I figured it was worth the risk). Jacob and I both found it a bit dry and abstract. Players try to wall off and control regions delimited by Alexander's wanderings. The bits are certainly nice enough, especially for a small-box game.