Finally some gaming! I was in Seattle/Redmond today on business, so I drove up last night for some late-night gaming with the Microsoft (and Boards & Bits) folks. This was the first time I sat down for some face-to-face gaming since before my Asia trip. Thanks to Tom Powers and crew for inviting me, and thanks to Microsoft for providing the space.

Two word review on this game: crap crap. I like manga art as much as the next guy, but believe me this game is in no way related to the theme. Quick summary of rule mechanics: real-time game, slap down the right card so that the color in the little circle in the upper left-hand part of the card matches the color of the shield on the card at the top of the discard pile. Think speed or slap-jack. The first player to get rid of his hand wins a prize token; whoever has the most cards in his hand gets a consolation token. 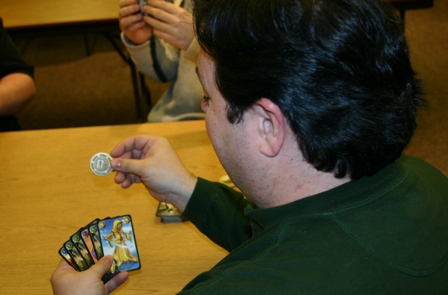 There are serious human factors issues with this game. I'm starting to notice this more and more with games I play, mostly related to color choices and the inclusion of distracting elements that make it difficult to quickly determine type information about game pieces. Every game designer should study Edward Tufte. In the case of Manga Manga there are a few major design flaws:

Even without these issues, I wouldn't enjoy this game. Too light, too reflexive for my tastes.

There has been quite a bit of hype about this game, so I was eager to try it out. I opened my own copy (we made a bulk order of about $500 worth of games with Boards & Bits and this was one of my purchases) and we started laying our track.

It is easy to make initial comparisons with Transamerica, and there are certainly some similarities. The primary way you score points is by building track segments between cities to connect more distant cities. Since its an Alan Moon game, you might also think there would be similarities to Union Pacific. Other than the train theme, there really aren't any similarities to that game, other than the mechanic used to draw cards. 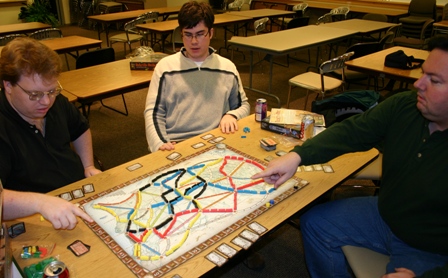 Endgame track layout. I thought I did well, completing 5 tickets with no missed ones. Finished last though.

I think this might be a really good game. The components are nice, though it would be cool if the trains weren't plastic. Then again, they are cool detailed little locomotives so I can live with them.

The game includes a number of different mechanics - hidden goals, set collection, and connectivity and route management. They play together well, and there was a ton of tension while playing the game, mostly relating to the tough choice of drawing more cards or laying down track now before somebody blocks you.

I hope to play again this weekend and I'll give another report. Tom thrashed us all, scoring in the 130s.

I ran to get some dinner so the rest of the crew played Ali Baba, an interesting memory game that looks like it might be fun for kids. 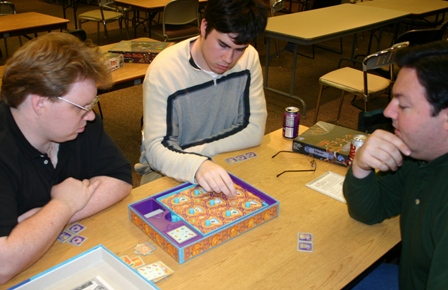 Memory game - players try and unlock the chest by making the symbols match the solution card.

For our last game of the night, I opened my new copy of Schrille Stille to teach the crowd. This is basically a party game, but I love it for the fun and the coolest mechanical gadget I've seen in a game since Mouse Trap. 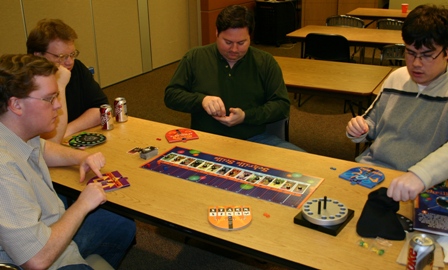 Each player owns a record label and works to influence the popularity of artists on their (and others') labels. This is done using a secret voting and tabulation mechanism that looks like a turntable. This is not a strategic game - it is pretty random but players that are good at tracking group-think can do well in this game. I highly recommend this game for gamers and non-gamers as a light party game. 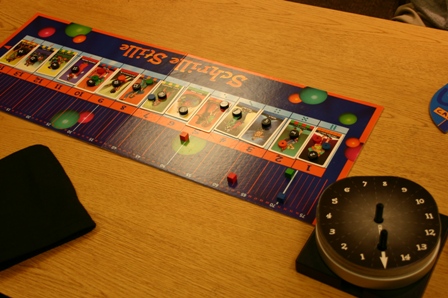 The board is where you track the artists, and the round thing is the vote tabulator.