Yesterday Jacob and I made the long trek up to Vancouver's east side to attend a game day hosted by Doug & Mimi. It had been too long since our last visit, so it was good to reconnect. Attendance was great - there were nine of us there for most of the afternoon.

The crowd was interested in some of the newer titles I brought, so we started one group of four with Desert Oasis. This game is very easy to teach and everyone caught on quickly. Matt immediately started building up a dominance on the camel track, and somehow the bidding worked out so much in his favor that he was able to grab a healthy chunk of the camel scoring tiles as well. This was my first taste of bad luck with this game - I had poor cards and rarely was able to snag the #1 player spot. Still, I did fairly well with the stone tiles and finished a respectable second place. Respectable, that is, relative to third and fourth because Matt managed to score around 194 points, 80 points ahead of me. 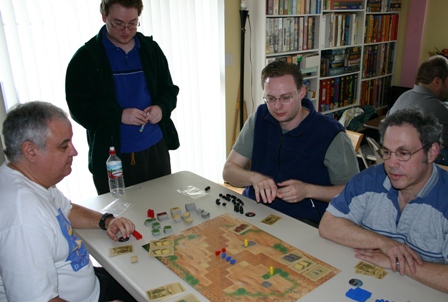 Meanwhile Jacob taught Mimi, Dave, and Kevin how to play Attika. Kevin expressed some concern that it was a bit dry, but is willing to try it a few more times. I think the game gets better once all of the players know the rules and the game goes at a decent clip. Mimi won this one. 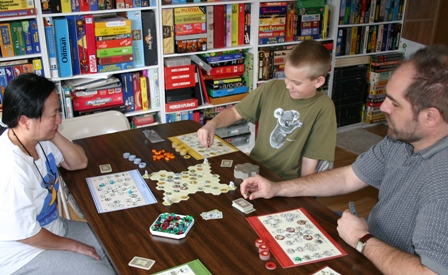 Alhambra was the next to come out. Again, this is an easy game to teach so we were able to get started very quickly. Tyler had a great start, with several exact value purchases happening early in the game. David turned out to be the strong player here, winning by 13 points. I finished last - my only signicant scoring coming from my towers. 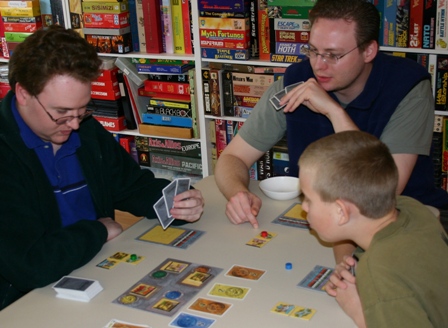 I still don't know much about this exploration game other than it takes a while to play. Doug, Mimi, Matt, and Dave were at it for about 2.5 hours. I believe Doug won. 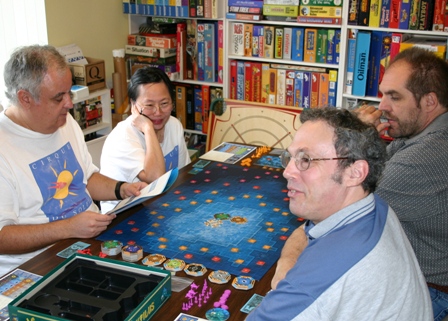 While we were waiting for Nautilus to finish, we searched the voluminous shelves for a good five player game. Someone suggested Puerto Rico, and everyone agreed. It was an interesting game with very different strategies competing. Kevin focused on corn and shipping, racking up tons of victory points throughout the game. David had a mix of shipping (mostly sugar) and buildings. I focused on higher value production and buildings. For most of the game I had a monopoly on tobacco, and several times I was able to trade by myself. This allowed me to build two of the large buildings. Unfortunately I made a bad choice in one of the buildings - I chose the one that pays extra VPs for the number of plantation squares populated, when I should have chosen the one that gives a bonus for violet buildings. I ended up filling out all of my building squares in the same round we ran out of colonists. The game ended in a very close finish - Kevin had 47, I had 45, and David had 43. 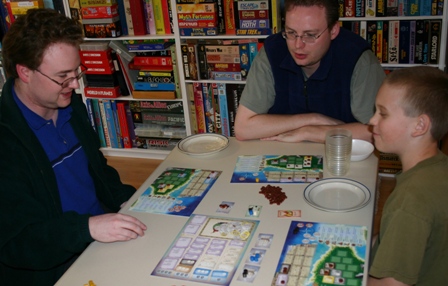 Mimi was kind enough to prepare a tasty Italian dinner for us, so while she finished the meal Doug, Tyler, Jacob, Kevin, and I played the newest Uberplay release Relationship Tightrope. The theme (trying to balance a male/female relationship) has never bothered me, but it looks like quite a few folks are annoyed by the topic. There are certainly some stereotypes on the cards that might offend some. Jacob and I really enjoy the game play, but Doug, Tyler, and Kevin were fairly neutral on the game. Doug managed a victory with the final scores: Doug (3), Tyler (6), Chris (15), Jacob (34), Kevin (36). 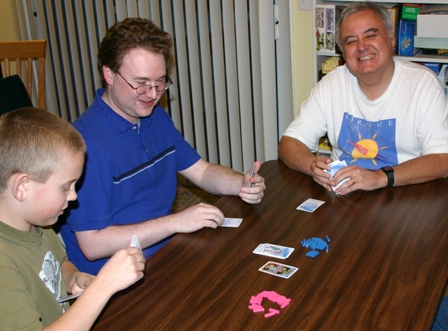 We finished the evening with the most recent Friedemann Friese game about monsters chasing hapless characters trying to escape from a dungeon. The game never interested me enough to try it before, but I thought Jacob would enjoy it so I agreed to bring this one out. 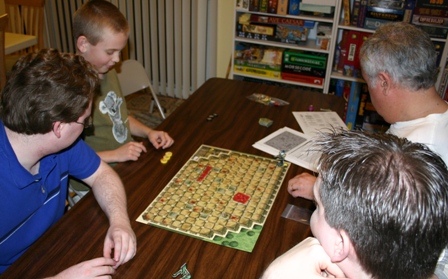 This game is quite a bit more fun than I expected. Some of the enjoyment comes from trying to predict where the monster will go and moving accordingly. Most of the fun comes from moving your characters so that the monster will chase and kill your opponents' characters! This is a fun race game that I would definitely be willing to play again. I managed to win, escaping with two of my characters. 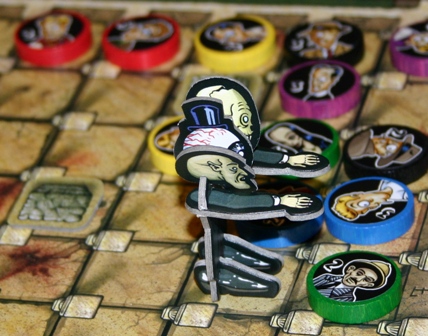