Uberplay Games was kind enough to send me copies of some of their newest releases to demonstrate at Game Storm in Portland on Sunday. The demos went extremely well, with over 15 different individuals participating by playing some of Uberplay's newest titles (as well as at least one "oldie").

This was certainly the most sought after title today, partly because it is one of Uberplay's bigger box releases, and partly because it is rumored to be the last collaboration between Alan Moon and Aaron Weissblum. My first play with Jacob and Matthew last week was fun, but we played it incorrectly (we failed to give the bonus action to the player earning the first player slot). Still, I was concerned at the time about how good this game would be with three players. 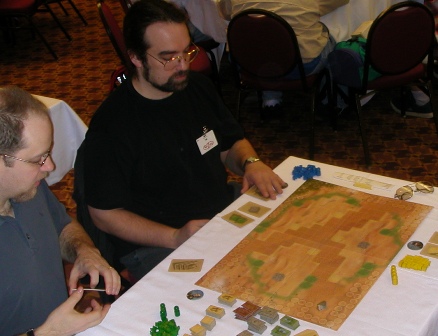 My concerns were confirmed by several others at Game Storm - this is not a great three player game due to some issues with the card offerings and selections each round. Fortunately we were able to get in a four-player game and it was met with much enthusiasm.

In Desert Oasis, players acquire and play three different tile types: steppes, stony plains, and oasis. These are played on the game board according to simple rules concerning adjacency and control. For example, two players' set of oasis tiles may never touch orthogonally. Players also place camels along the camel track, which divides the tile laying areas into three sections.

Players also collect and keep hidden scoring tiles in each of those four categories: yellow horses (steppes), grey oovos (stony plains), green water wells (oasis), and red commodities (camels). At the end of the game, players score the sum of the products of the tiles/camels and their corresponding scoring tiles. For example, if I controlled 10 oasis tiles and managed to collect 8 water well scoring tiles, I would score 80 points. For the tiles it is possible (and likely) to control more than one area of a particular type (each player has four control markers, so will never control more than four discrete sets). For camels/commodities, only the largest single chain of orthogonally connected camels are scored.

The most interesting part of the game is the way in which these resources are acquired. There are cards that contain images of the different types of resources and scoring tiles, as well as a few cards that allow a player to draw more cards. For example, there are some cards with a single oasis, some with a single water well tile, and some with two of each. Each player holds a player order marker, distributed randomly at the start of the game. Players start with five cards (players do not look at their cards, so they are stacked face-down) each, and the first player opens the game by turning over his top card. This will constitute his offer to the other players - he will not get to choose this for himself. If he only offers a single card, he draws two cards from the deck and places them at the bottom of his pile. He may also choose to offer a second card, and in that case he will only replenish a single card. Finally, he may choose to offer a third card and not get any cards for replenishment. Each player in turn order repeats the same offer process.

Why offer more cards to your opponents? You will usually want an opponent to take your offer over another because this will allow you to act earlier the following turn. Let's say I'm player 4 this turn, and I make a sweet offer of three cards. Player 1 likes my offer so takes it. By doing so, player 1 also hands over his player marker to me (face down), allowing me to act first the following turn. After all players have taken their actions in the current turn, as a bonus the player that earned first player status gets an additional action allowing him to place an additional tile or camel (this is rule Jacob, Matthew, and I missed in our first playing). This is a very creative mechanism for resource allocation, but I do not think it works for three players. Because a player cannot choose his own offer, the first player will always be forced to choose the second or third player's offer. If the first player can always make a week offering and then choose the third player's offering, forcing the second player to take the first player's offering. This strange dynamic led to offerings that were often very enemic and it didn't seem that the players would compete enough to get first position. The offering mechanism worked extremely well with four players, however, and I suspect it would be even better with five. One nice thing about this game is that it shouldn't take much longer for five players to play a game than with three. The game plays very quickly and has almost zero downtime.

Tim, Mike Deans, Matthew, and I played the only four player game of the day. Matthew looked somewhat disinterested in the game but must have been hustling us since he played very well. 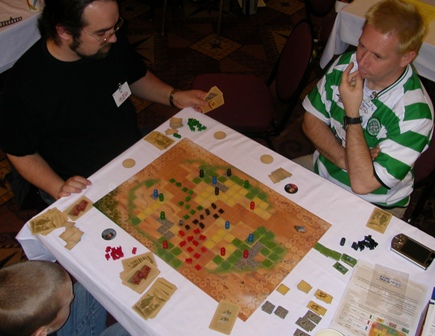 There was quite a bit of competition for camels as you can see from the game board, and I (through no choice of my own - I rarely was given the option to take camels) managed to stay out of that fight and instead focused on a large patch of oasis. This payed off in the end, and I pulled out a victory. Final scores: Chris (121), Matthew (116), Mike (108), and Tim (107). The game finished in just over an hour. 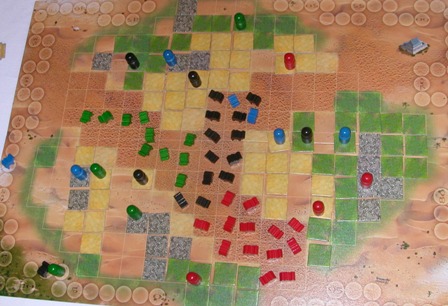 Tongiaki has become one my favorite lighter three player games, so it was my pleasure to teach this to several groups today. My first play of this game was on BSW, but I think it looks and plays much better in real life. Each player plays a tribe in Polynesia set on sailing to new islands to escape overpopulation. 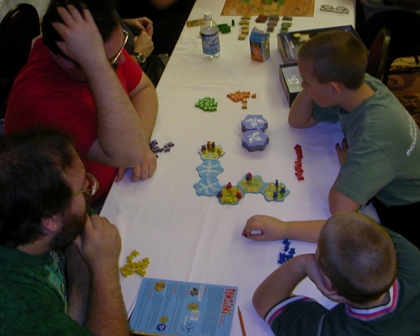 This is basically an exploration game with some really cool mechanics that trigger an escape from an island. The land tiles have beaches with individual slots for catamarans (Tongiakis). Once a beach fills up, the catamarans venture off into the sea. Sometimes the sea is too treacherous and the boats will sink; other times the boats will successfully navigate to a new island. The goal is to establish population on as many islands as possible. Each island has a point value, and once all of the sea or land tiles have been used, players add up the scores for all islands where they reside (there are no majority rules for controls of islands). 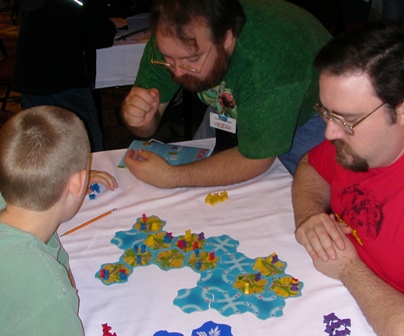 This light cardgame is a remake of the 1999 Knizia game Drahtseilakt (Tightrope), lightly themed with the struggle of married couples to balance the needs of the man and woman. This may seem like a dated theme in the Portland area, but yes, men and women do still get married. 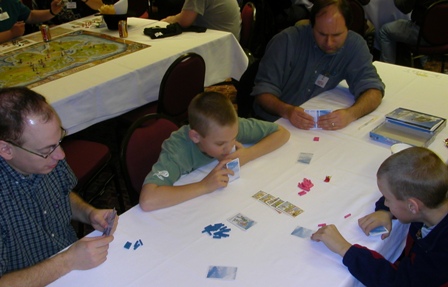 Dave, Jacob, Wes, Matthew, and I try and balance our relationships.

I could easily see this game becoming one of my favorite light fillers. The game is exceedingly simple: there are 50 cards numbered from 1 to 50, and each player is dealt 9 cards at random. There are 9 relationship cards (numbered from 1 to 9) that are shuffled and turned over one at a time. As each relationship card is revealed, players secretly choose a card from their hands to reveal and turn them over simultaneously. The player with the highest number takes a number of blue balancing sticks equal to the number on the relationship card, and the player with the lowest number takes the same number of pink balancing sticks. If a player is holding both blue and pink sticks, he counts how many of the lesser number of sticks he holds and discards them as well as an equivalent number of the other color. For example, if a player holds 4 pink sticks and wins 6 blue sticks, he would be able to discard 4 pink and 4 blue sticks, leaving him with only 2 blue sticks. He is now more in balance than he was before (4 to 2). The goal, of course, is to finish the hand with zero sticks and be perfectly in balance. There are also two instant forgiveness (one blue, one pink) cards in the relationship deck. When these are turned over, the next card is revealed and the blue or pink number (depending on which instant forgiveness was drawn) will not be awarded this hand.

There is a tremendous amount of luck in this game - players can be dealt fairly awful hands. Still, I suspect there is a great deal of skill in playing the cards to maximize balance and I look forward to playing this one quite frequently. In our game, Wes did the best job of balancing. Final rankings were Wes (2), Matthew (5), Dave (8), Jacob (10), Chris (12).

Chris requested on Friday night that I also bring over New England since he had been hoping to play this great game from 1993. I tought four players how to play and they picked it up very quickly. 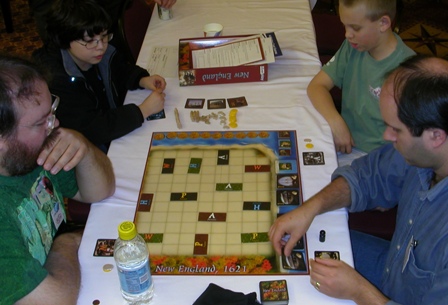 Arthur needed to leave just before the end of the game, but DaveE was nice enough to sit down in his place to finish it out and get a victory. Final ranks were Arthur/Dave (35), Chris (33), Wes (33), and Jacob (27). 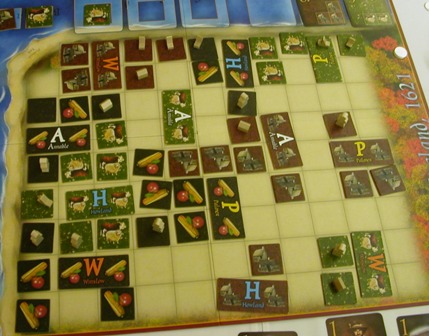 Towards the end of the day Wes requested a game of Alhambra. Uberplay has not yet released their English language version, but were nice enough to provide the German language version for me. I've played this a few times in real life and on BSW, so I taught the rules and let the three players play on their own. I didn't capture final scores, but feedback on the game was unanimously positive. 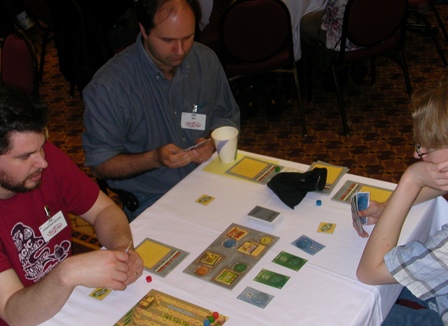