There have been many shut-in hours over the past 5 days - a perfect opportunity for some family gaming! These reports span several days, starting last Friday evening and ending this evening with our out-of-town gaming guest Kevin McKenzie from Dallas, TX.

This is quickly becoming a family favorite, or at least a favorite of Jacob and Matthew. As I've mentioned before, this version is very playable if for no other reason than the countdown mechanism that limits game length.

This time we squared off using the standard 3-player rules, with Jacob and I playing the evil forces and Matthew playing good. Every man for himself though - Jacob and I were competing with each other. 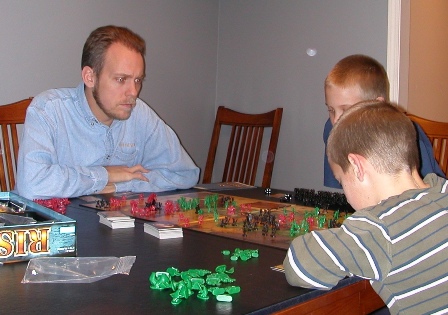 I started conservatively, trying to consolidate at least one region and waiting until I had territory cards to turn in to rapidly grow my forces. I also used my leader to take a few sites of power, granting me additional action cards. My patience paid off and I was able to keep Jacob and Matthew from consolidating regions. Risk has a runaway leader problem, and that was certainly the case in this game. I won based on victory points when the ring came to Mordor.

A Game of Thrones Boardgame

Around 11am on Sunday Ken Rude called me to see if we were up for some gaming in the afternoon - a perfect opportunity to bring out A Game of Thrones! This game is meant to be played with five players. I was a bit concerned about Matthew's ability to comprehend the rules for this game - this is the hardest one he has tried so far. He did fine understanding the basic mechanics if not the overall strategy. 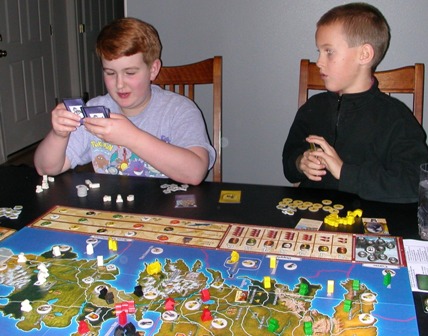 This is a game I've been wanting to try since seeing it first at GenCon, and it didn't disappoint. Some of the things I like about this game:

Jacob started the game very aggressively, attacking my navy in the first turn. He paid the price though, since I was able to counter-attack and control the seas near his home, effectively creating a naval blockade. Matthew was scattered in his strategy and had a difficult time keeping focused on short- term goals. Brandon played passively and, as house Stark, didn't make the necessary push southward to gain victory points (there are few cities in the north). So it was essentially a battle between Ken and me.

Ken had a bit of an advantage starting in the south - as house Lannister I was caught in the middle and had to fend off all of the players. It was still a very close game, with Ken winning (score 9) and me a close second (score 8).

Monday evening Matthew requested a game of Lord of the Rings the boardgame. This was the first Reiner Knizia game I ever played, and arguably the game that brought me back to boardgames two years ago. The original game is somewhat unique in that it is a cooperative game - players work together to try and defeat Sauron and destroy the one ring. Jacob volunteered to join us if he could play Sauron, a feature provided by a solid expansion to the game. Not to be left out, Julie joined us to play the role of Merry (Matthew was Frodo, I played Sam). 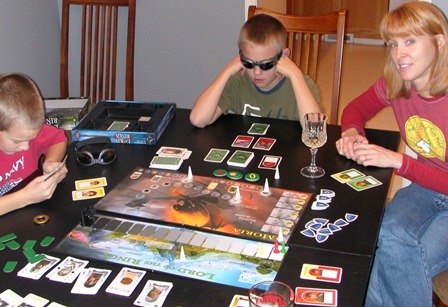 Jacob takes on the role of Sauron in the expansion to the Lord of the Rings board game. Sauron stopped the fellowship in Mordor. Oh, and you can tell Jacob is the evil Sauron because of his eyewear.

The base game is challenging enough to win, but with the Sauron expansion it is extremely difficult for the fellowship to succeed. Jacob enjoyed playing the evil role and worked hard to thwart us at every turn. We did better than any prior try though, getting into Mordor for the final race to Mt Doom. Actually, only Frodo (Matthew) made it that far - Sam and Merry spent too much time carrying the ring and were destroyed by Sauron at Shelob's Lair. Frodo didn't make it to Mt Doom, and our final score was 52.

This is on the bargain shelf at Toys R Us and Amazon these days, and for $5.97 I figured we couldn't go wrong. My mom was nice enough to get me an Amazon gift certificate for my b-day, and this was one of the games I ordered. 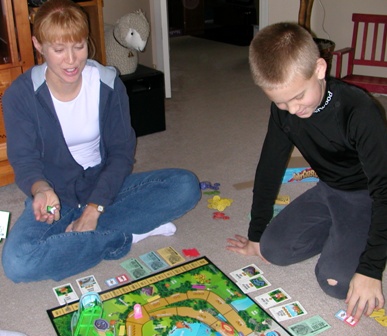 We were all thrilled with the quality of this game. It is light fare, but much more than a typical roll-and-move mass market game. This is an auction game at heart, and has some decent economic decisions (value of capital in hand vs. investing in a ride that may not procude enough visitors by game end). My only criticisms are:

Overall this is a solid game and easily worth the $6 investment.

I greatly enjoyed my two prior playings of this game, but had been hesitant to bring out with the family. New England is a pretty abstract game and is light on theme. There was a discussion on spielfrieks recently about this game, and I shared my thoughts on this topic, arguing that it probably isn't a great family game. 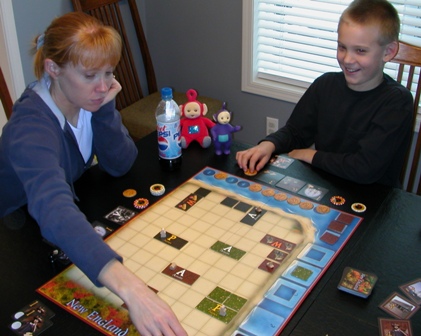 I think I was wrong in my comments - this could be (and probably is) a great family game. Some reasons why:

I think this one will come out again soon with Julie and Jacob. I'm not sure Matthew is ready for it yet, but I'll give him the choice of joining in our next play.

Before the holidays I got an email from Kevin McKenzie, from Dallas TX, telling me that he would be in the area doing some work. He found me through his gaming group, one of the groups I contacted when I traveled to Dallas earlier this year. Kevin wanted to find some gaming action, so I hooked him up with a few local groups and invited him to our home. We were hoping for a few more people, but the ice and snow kept everyone else away. No problem - with the built-in gamers right here in the house we were in good shape.

We started with a 5-player game of I'm the Boss, a family favorite negotiating game. This can also be a vicious game, but we kept it light-hearted and had a good time. I lingered near last place most of the game - it seemed like everytime I was close to finishing a deal, Jacob would send away one of my associates on a business trip. Julie played a strong game and came out on top. The game ended quickly when we rolled a 1 on the first possible end-game deal tile. 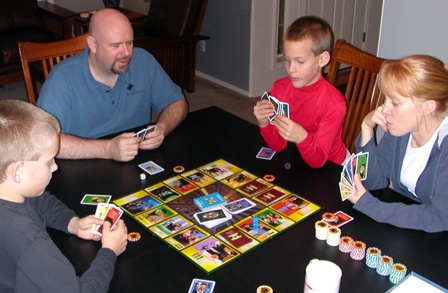 While Julie helped Jacob and Matthew to bed, Kevin and I squared off on a game of Balloon Cup, a great two player card game that Kevin had never played. Kevin picked up the gist of the game very quickly, and grabbed the first two trophies in the game. The final three were hard fought, with both of us in striking distance of victory. I managed to win a race that gave me enough prizes to win the final three trophies in one play.

Kevin requested this as our "heavier" game of the night - he had never played it, and I had only tried it once at Kevin Graham's recently. This was a Christmas gift from the Rude family. Julie joined us for a three-player game. 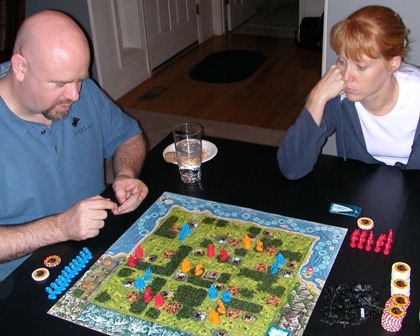 The competition was much stiffer this time! Kevin is a quick study of strategy, and immediately decided that income would be important and sought to build a domain with mines as quickly as possible. I wasn't as focused in my strategy, and lost out on some early opportunities to get some income. Julie got some knights out early in a key domain as well, setting her up well for expansion and completing her domain.

In the end it was a two horse race, and I wasn't in it. I'll write this off as a learning game. Similar to Settlers, I think it is very important in the opening to get more production. At mid-game, Julie and Kevin were taking actions 2 out of 3 turns, while I was at best taking actions every other turn due to poor cash flow. Kevin pulled out a 40 point victory shortly after the card deck expired. He played a solid game, but Julie deserves credit for a very strong first game.

That's all for this report - Kevin should return next week and we hope to get the right mix of people for a playing of A Game of Thrones.