Our good friends the Rudes joined us for our second annual New Year's Eve game night. Last year was mostly CCGs - in fact, I held a sealed deck Magic tournament for all the boys (including Ken and me). This year was mostly lighter fare. Julie, Jacob, Matthew, and I started by playing a few games of Liar's Dice while we waited for the Rudes to arrive. 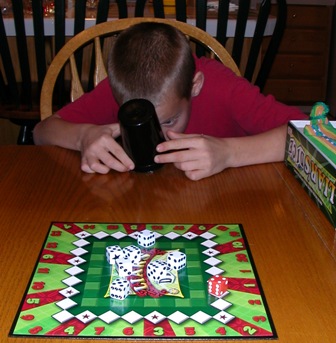 Ken then brought the Bucket King while we waited for Tracey to arrive. This was a fun, light, family card game and I wish we had played more than one hand. I look forward to trying it again.

One of our favorite games to play at Keuka Lake when we travel there in the summer is Hand & Foot, a Canasta variant. Everyone we've met plays this a bit differently, and one of these days I'll post our rules for reference. Ken and Tracey have played their own version as well, so we decided to play some four-hand team Hand and Foot. The men got off to a great start, catching both Julie and Tracey in their footsies in the first hand. It was all downhill from there though, and we ended up losing by about 1000 points. 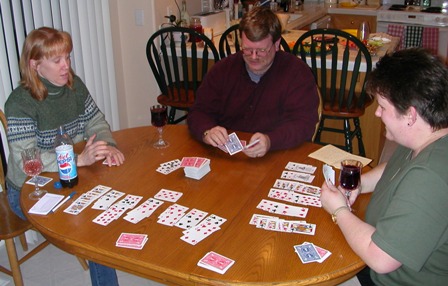 While we played this game, Jacob taught Brandon and Chelsea how to play Acquire, a new game (for us) that I was given for my birthday. This game has already seen 3 plays in just a few days, and it has quickly become a family favorite. We'll see if it sticks. 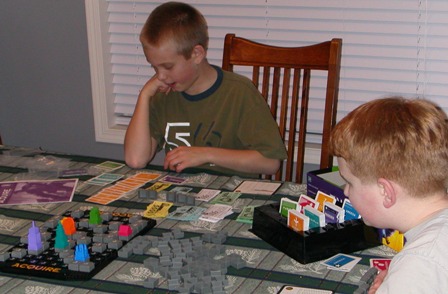 The adults then played Target, an interesting card game that is a mix of poker and rummy. I wasn't wild about this game - most of it was spent drawing and discarding while chasing elusive goals that would disappear just as I drew the wrong card. Maybe I just didn't play it well... 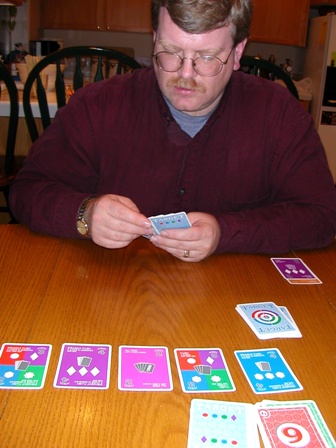 The last game played by the adults was Texas Hold'em with our cool new casino-quality poker chips. This was played a lot during our vacation in Vegas, and I'm enjoying some research into strategy for this game. Chris ended up the victor, winning an all-in showdown with Ken.