Julie and I hosted an all-day gaming event/party at our home in Sherwood on Dec 13. I invited all of my usual gaming buddies plus the folks over at Rip City Gamers, a local gaming group. I also took the opportunity to invite a few folks from work that are into boardgames. The result was about 20 people at our house from 1pm until the last straggler left around 11pm. There were a ton of games played. I'll provide a lot of pictures here along with links to the games, but I can only provide commentary on the games I played. In the future I might adopt a system like Greg Schloesser's - he hands a slip of paper to each group of players playing a game and has them write a brief summary, final scores, and player ratings from 1-10 for the game. This makes for much more complete session reports, and he has some great data to track game quality (and we love data, right?).

Dave and George showed up promptly at 1pm, so we started with a game of Liar's Dice until more folks arrived. Of course as soon as we would start to play, new people would arrive and so we would stop, explain the rules, and start over. By the time we actually started the real game, we had 10 people playing (I used both a Liar's Dice box and a Perudo set to give enough cups and dice). To accelerate the game, we played the following variants:

Some people dropped out quickly due to bad luck (when there are 50 dice in the game, it isn't hard to miss by 5 die). The game wrapped up in about 30 minutes - I think it was down to me and George at the end, with George coming out on top.

George brought out this vintage (1988) horse racing game - Dave, Jeremy, and I joined in. Each player gets a horse and secretly writes down whether he hopes to win, place, or show in the race. Three races are played in all (hence the name of the game). Starting gate order is determined randomly for each race.

On each turn, the player with the horse in front (ties go to the horse on the outside) goes first. The player can choose from any of three dice (slow, medium, or fast). If you use the slow dice, you get a payoff coupon that pays a great return for win, place, and slow. The fast die, of course, will get you farther but with a lower payoff. So the basic idea of the game is to first decide how aggressive you want to be (your secret goal) then to move at an optimal speed where you maximize your position and payoff. 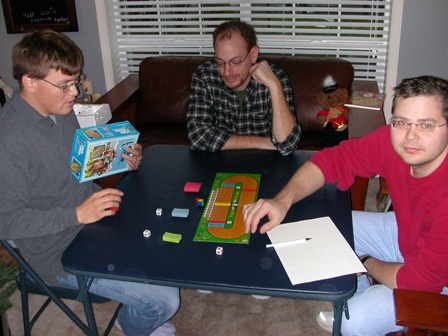 There is still the random element of the die roll, and it bit me twice. In two of the three races, I was three or four spaces away from the finish line. I made the decision to use a slower die that gave me a 5 in 6 chance of crossing the finish line but would of course provide a better payoff. Both times I rolled the lowest number possible, didn't cross the line, and saw my opponents' horses cross in front of me. I ended the triple crown with no money, and George won the overall crown. I'm no Seabiscuit.

Kevin and Mike played a game of Carcassonne while Jim watched. Jim is very new to these sorts of boardgames and is quickly getting indoctrinated. For some reason my kids don't enjoy this game so I rarely get to play it. This game included a huge set of tiles, including Rivers, Inns & Cathedrals, and Builders & Traders. 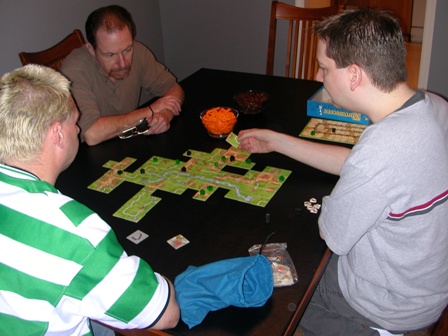 Yes, yet another time where I get to watch someone else play this game without ever trying it myself. Next time I game with Kevin I'm going to play it! 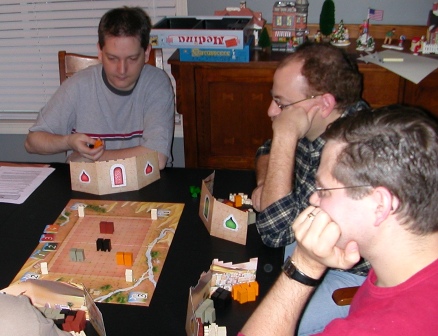 Kevin, Dave, and Jeremy contemplate their next move in Medina.

This new Uberplay game was brought out - very nice looking. The game is not getting the best reviews - in fact, some folks on spielfrieks are saying it is one the bigger disappointments of the year. I still would like to try it and judge for myself. Jeremy won, followed by Kevin, Mike and Jim. Mike really likes this game. It is fairly easy to teach, yet some thought is required. "I find it in the same mold as Trias, another of my favorites, which also requires some thinking. I guess that is what 'dry' means!" 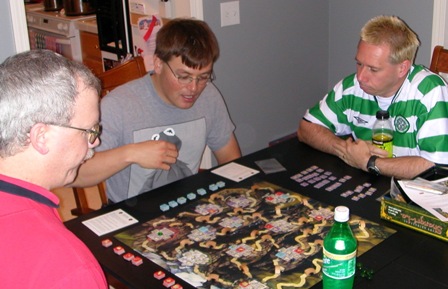 Aaarrrgh! This favorite of Matthew's came out, and I quickly taught Brandon, Kara, and Kim how to play. For such an apparently simple game, the rules are a bit complex and there is much to remember. I haven't yet tried the newer English language Days of Wonder version. 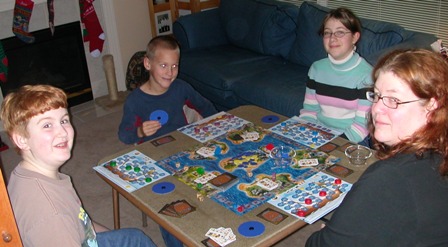 This game started around 1:30pm and went on for at least two hours. I can't remember who won, but Jacob told me he finished in last place, way behind the leader Doug. 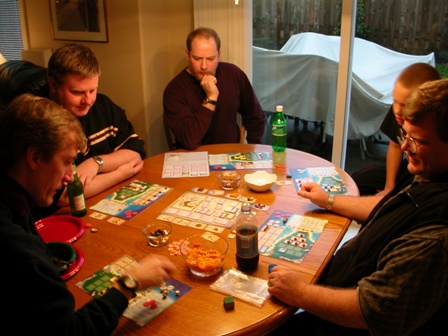 I tried to teach this quickly to George, KC, and Kim, then realized I just hadn't played enough to have the rules locked down in my head. Luckily KC is good with rules and quickly caught the rest of the group up. This is an OK game - fairly simple to play, but it hasn't come out much since I bought it last spring. 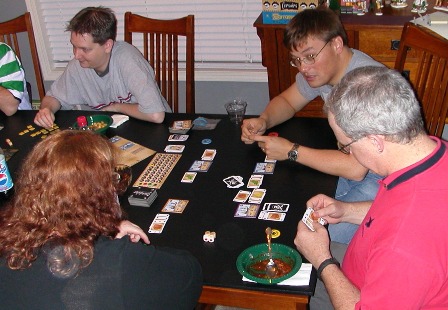 Bill brought this transportation game - I'm dying to try it, but didn't get a chance this day even though it was played twice. 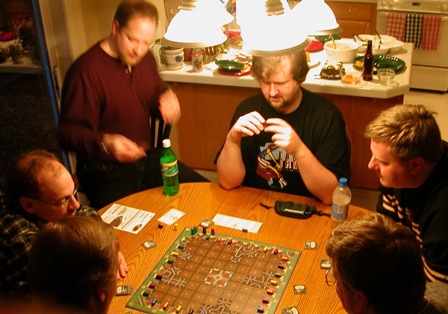 Settlers of Catan - Cities and Knights

Much of my time was spent playing the Cities and Knights expansion to Settlers of Catan. I've been playing the online version quite a bit lately and when Bill suggested this I jumped at the chance. So Julie, Bill, Wendy and I settled down for a game - this expansion can take quite a while to play - ours lasted around 2.5 hours. 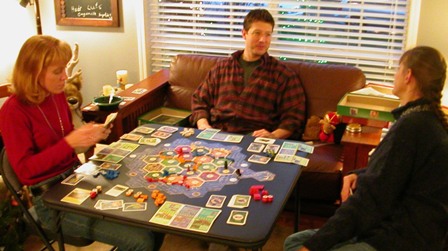 This expansion adds a number of elements to the basic game of Settlers:

Despite the longer playing time, I like this expansion very much. The main reason is that there are usually more options on each turn. One thing I don't like about the basic game is that very often a player has nothing to do on a turn - not the case in this expansion. 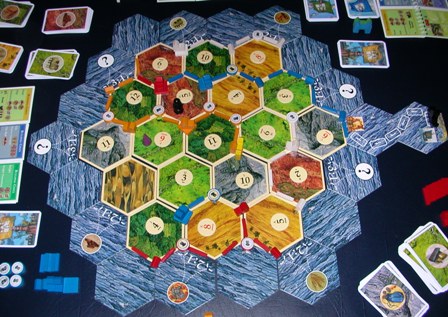 I don't know much about this trick taking game by Friedmann Friese. 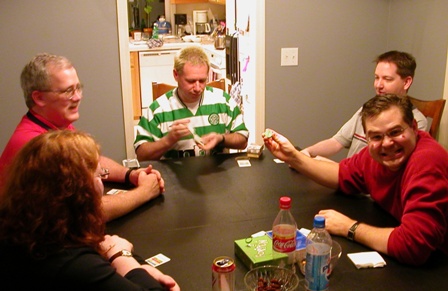 After Foppen, Jeremy taught For Sale to the same group. Don't know who won.

I refreshed a few folks on the rules to this great rummy variant (my favorite). 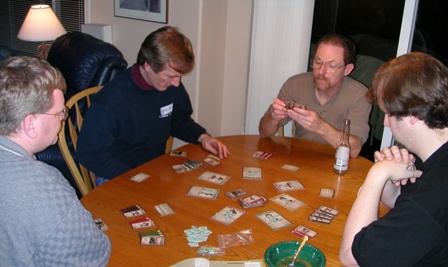 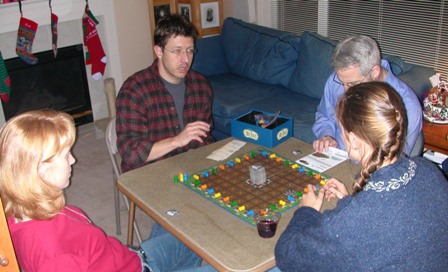 I purchased this recently but hadn't yet played my version - my first and only play was with the Arizona Boardgamers back in September. It didn't disappoint - I really like this game. It is very easy to learn, but I look forward to exploring different strategies. I initially started to go for a pilgrim advantage, thinking that the early income would help and if I can maintain the lead it would be worth some nice victory points. But KC was able to race ahead so I focused my efforts elsewhere. I got some nice card draws that let me build 3- and 4- tile configurations, and I jumped into the lead. I thought I had plenty of breathing room on the last turn, but just in case I built a barn to pull into a tie for the most with KC and Jim, nullifying their advantage. I was lucky I did - I only ended up winning by a single victory point over KC. 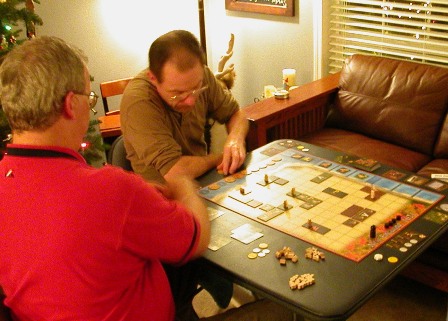 What the Kids Did Most of the Afternoon

Just had to include this photo. Jacob, Matthew, Brandon, and Kara played some games early on, then retired to the playroom for some good old fashioned make believe. 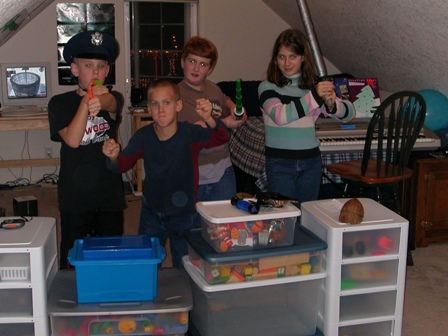 This was the highlight of the day for me. KC Humphrey has designed a very good game that I am eager to play again. I'm running out of time here so I won't describe it in full - I hope to play again on Dec 29th, and if I do I'll write up a more detailed review. 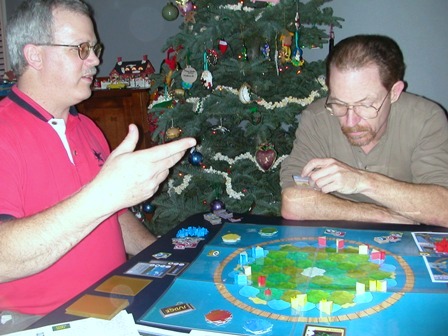 Players take the role of leaders that are settling and terra-forming a new planet, competing with each other for geography and agriculture. Players have farmers and workers - farmers place and harvest farms (surprise), while workers carry out activities specified on action cards. There are some very creative mechanics in this game, and the use of action cards as some interesting choices and great flavor. 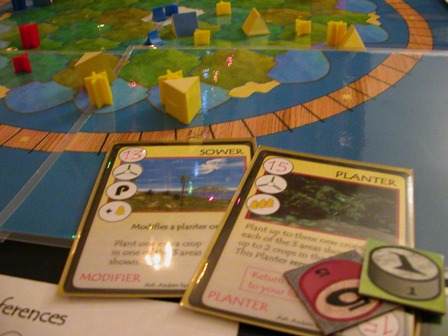 KC is a great teacher and was very patient as we picked up the basics and started to move into strategy and tactics. I managed to win the game, but I suspect KC was pulling some punches with us newbies. I can't wait to play this again and I hope KC finds a means to publish this game.

Ken, KC, and I wrapped up the evening with this perplexing trick taking game. The game is perplexing because trump is always whatever suit is not lead, and because each player is trying to avoid taking tricks in their own chosen poison suit. I never quit managed to figure out some of the tactics for how to play my cards - you do want to take tricks (that's how you score points), but it can be a challenge to dump cards on your opponents and avoid taking your own poison suit. I'd like to play this again, though my initial impression was not as strong as Die Sieben Siegel.