Jacob, Matthew, and I sat down over a week ago to play another round of this Risk variant. This was our first attempt at a three player version and we made some tweaks that ended up being quite painful for me. The rules specify that in a three player game, two should play the evil side and one the good side. I took on the good side. What the rules don't say is that the two evil players should unite against the good player (i.e., it is supposed to be a free-for-all). Well, I let Matthew and Jacob team up against me and it wasn't pretty. 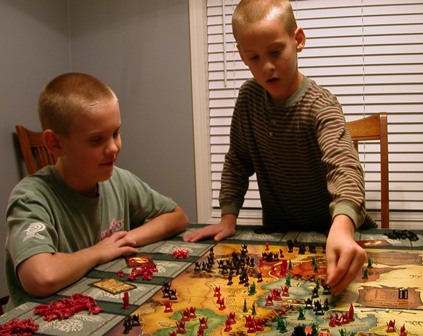 Risk has enough issues with runaway leaders (the more territories you control, the more troops you get, so it is very hard to catch up once you fall behind) in a regular free-for-all, but this was out of hand. I was lucky to conquer any territories at all during my turns, and that only left me more exposed to their attacks on subsequent turns. In short order Sauron's and Saruman's forces swept over Middle Earth, dooming mankind and the other good races to an eternity of servitude and just plain bad times. And its all my fault. 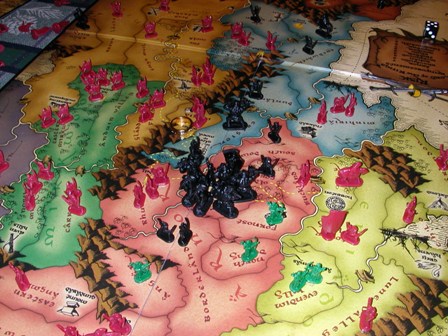 The last stand of the good guys. Those green battalions that you see are all that I have left.