Jacob and I were finally able to attend another group gaming session on
Saturday, this one held at Doug and Mimi's up in Vancouver. We had a great
time, and as usual they were excellent hosts. This session lasted from about
1pm to 9:30pm. On with the games...

Jacob and I didn't play this one, but Doug, Mimi, Phil (a friend of Doug/Mimi
up from San Francisco), Sabrina, and Greg. Doug ended up the victor in this
one, which finished up shortly after we arrived. 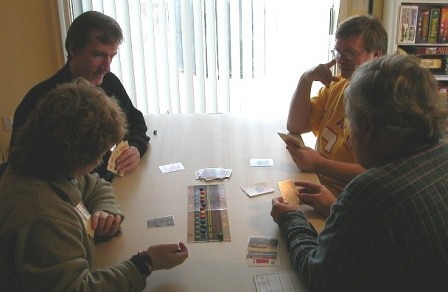 Doug, Sabrina, Greg, and I started a game of Amun Re, while Jacob, Mimi, and
Phil decided to give A Dog's Life a try. This was a new one for me - I hadn't
seen or heard of it before. 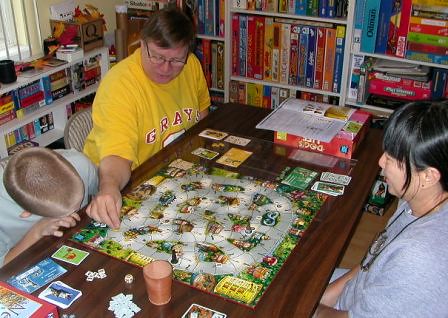 Jacob loved the theme, and overhearing some of the conversation about piddling
and "you can't pick up food until you drop your bone" sounded pretty humurous.
Really cute dog figurines too. Phil was the winner. 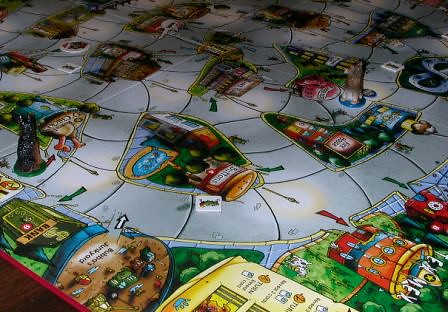 Mimi always does such a great job picking out games for Jacob to play - she
tries hard to find light, funny themes in their vast game collection. Next on
the table for Mimi, Phil, and Jacob was Maestro. Apparently players are trying
to hire musicians to debut in a concert. Phil managed to win again. 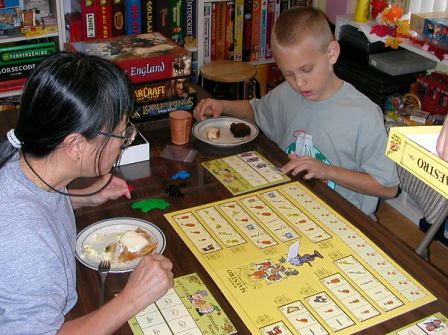 It has been a while since I'd played this game, and Sabrina/Greg were
intrigued by the theme. Doug, Sabrina, Greg and I squared off for a game of
this pyramid-building Egyption game. Doug and I went head to head, and I had
the upper hand after the old age (first round of scoring) with a slim lead of
two points. 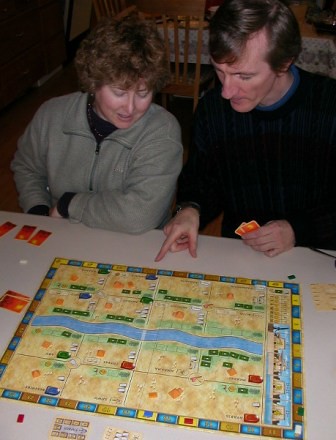 Things got very contested in the second age. I made a critical mistake in the
bidding for one province. I had the power card that prevents someone from
overbidding by one, and played it after biddin.3 gold. I should have bid 6 and
forced Doug to go up to 15, but he grabbed it for 10. And 15 was beyond my
means, so I had to leave it for him. This was probably a deciding factor in
the game - it gave him 2+ pyramids and some good production. I managed to keep
it close and went for the most gold and the 6 victory points that go with
that, hoping that my give me the edge. This meant making a substantial
sacrifice in the last round to drive up the farmer harvest. Trouble was, Doug
also owned the province with the two temples, so this ended up helping him
more than it did me. Doug ended up with 50 points, I had 46. Greg and Sabrina
had cash flow issues - it took too long for them to understand the production
cycles and some of the tradeoffs (like making sure you get some farmers
early).

Did I mention that Doug and Mimi have a butler? 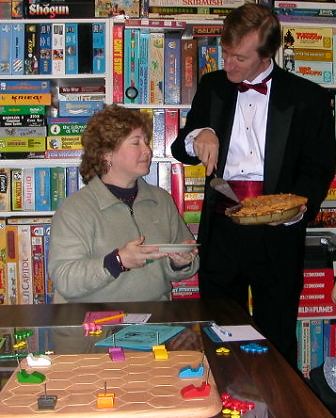 Seriously, Greg had to take off for a hospital charity event. Fortunately,
right at this time (about 4pm) 3 new guests arrived. Joining us were Tyler, a
local Vancouver resident who is finishing up his MA in Medieval history, Kim,
who recently moved to the Portland area from Tucson (we've gamed with her
before), and Michelle, who just moved up here from Monteray. We thought it
would be a good idea to try a light game that everyone could play together, so
out came Autoscooter. 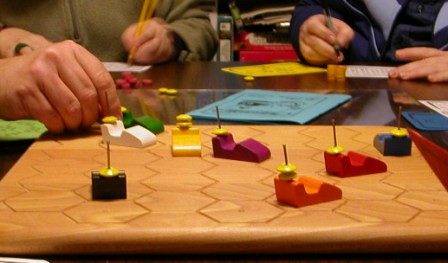 This is a light "programming" game, ala Robo Ralley or Dragon Delta. Each player
controls a bumper car, and the goal is to crash into the other players' cars
without letting them hit you. Cars can drive at speeds from 0-3 (indicating
the number of hexes move), and can accelerate +1/-1 per turn. Each player
starts with 10 chips that represent points, and when you crash into an
opponent in the right way you can steal their chips. It obviously doesn't make
much sense to crash into someone that has run out of chips.

Players plot their moves each turn, using a letter-coded quick reference guide
that describes several pre-plotted moves. For example, if you are going at a
speed of two, then you could plot a move where you advance forward one hex,
turn 60 deg to the left, then go forward a hex, then turn 60 deg to the right.
I was extremely luck in this game (it can be quite chaotic with this many
players) - I was never bumped during the entire game and ended up with 28
chips. Phil also did well and finished with 23. You can see the (slightly
blurry - sorry) scoresheet below. 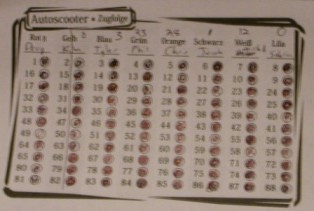 Phil, Tyler, Michelle, and Kim embarked on a game of Puerto Rico. It was hard
for me to resist - this game is one of my favorites. But I wanted to try
Warcraft, so I'll have to wait for another opportunity. Tyler won this game -
I don't know what the scores were. 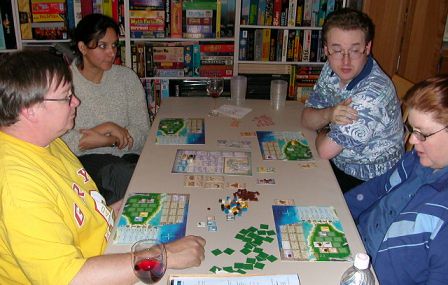 I received Warcraft Saturday morning in a Funagain
order (along with Lord of the Rings Risk: Trilogy Edition and New England). Doug,
Jacob, and I agreed to play and learn as we go. The rules recommend playing a
special scenario called The Elf Gate when playing with three players, so
that's what we did.

The rules were a snap to learn - the most time was spent sorting pieces; there
are tons of bits in this game. Overall quality is nice. There are some
complaints about the lack of miniatures for this game - each of the races uses
generic wooden pieces for melee, ranged, and flying combat units. It didn't
bother us at all, and the strong color differentiation was nice.

Things start off slow in this game, with very little player interaction. This
is much like the computer game, as players focus on harvesting resources,
upgrading units, building new production facilities, and training units. Each
race has some specialization - I played humans, Jacob was undead, and Doug
played the orcs. In this scenario, there is also a cluster of neutral night
elves in the middle of the board. Players are trying to get control of the elf
gate in the middle of the board - control consists of having a unit in the
middle of the board, with less than 3 enemy or neutral units adjacent to the
middle.

I decided to only train ranged and melee units, avoiding the costly flying
units to see if I could conserve resources. I started pushing to the left and
center, trying to make my way into the middle. In three player games like
this, he who attacks first is often the loser, so everyone was very patient.

Things got interesting when Doug decided to come in on my right flank towards
my town center - I had just a few units there and looked fairly exposed. He
fell right into my trap, since I had two town portal cards that allowed me to
teleport six of my combat units into supporting positions (see the picture
below). This created a huge setback for Doug as I wiped out a significant
chunk of his military. 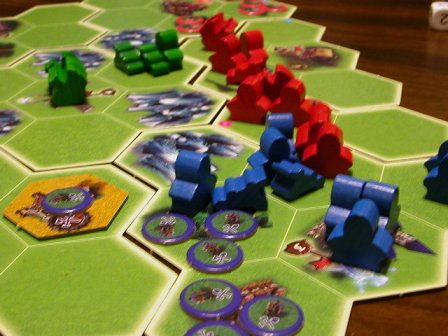 Then I made a serious tactical error. Jacob in the meanwhile was working his
way into the middle - we had a bit of a skirmish on our borders, and he
decided to lay off and start fighting the elves. He had also trained a flying
unit that was in range of the center - now vacant since I had cleaned it out.

Jacob wisely flew his unit two hexes into the center, then engaged the only
remaining elf units in his way. It was a close battle, and only one of his
units survived. But it was enough for Jacob to claim victory, since I had only
two units adjacent to the middle. You can see the final results below - Jacob
was purple, I was blue, and Doug was red. 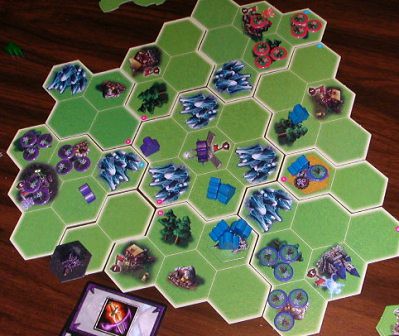 While I cleaned up Warcraft, Jacob joined everyone else for one final game of
the evening (for us anyway). Take it Easy is a fantastic puzzle game. I don't
remember who the winners were, but two tied for the win with 158 points. 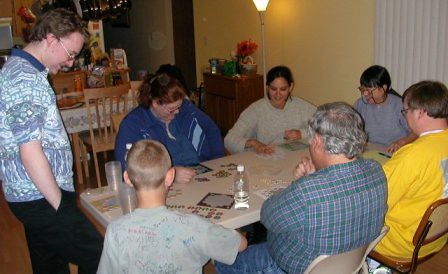