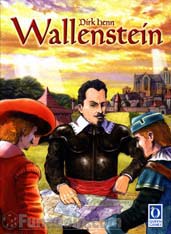 My backordered copy of Wallenstein finally arrived from Funagain last week. I played this for the first time during a trip to New York City last July, and I was anxious to play again. I'm pretty sure this game is out of print, so I think I'm fortunate to have landed a copy of this game.

My routine when a new game arrives is to dismantle the bits and divide into little plastic baggies. One of the coolest features of Wallenstein is the combat tower, which is used to resolve combat between two players. Little wooden cubes are dropped into the top, some get stuck in the tower, and some roll out into the tray. The player with the most cubes rolling out wins the battle. It is actually a bit more complicated than that (native farmers might fight on the side of one of the players, for example), but that's the basic idea. Jacob suddenly became very interested in the game as I showed him the tower and the gameboard and I talked him into trying a two player game. We used the variant rules posted on the 'geek. One other note on the rules - make sure you grab the most recent translation from the 'geek! The version sent with the game from Funagain was almost worthless.

Jacob picked up the game very quickly, but was a bit too aggressive in his attacks. Rather than focus on expansion first and then picking battles where he had an advantage, he tried to fight me one too many times where I had equal opposition. The luck of the tower was leaning towards me in these battles and I came out ahead. He was also slow to understand the victory conditions and didn't get enough strength in his buildings across the region, so I won pretty handily.