Saturday night I headed east from my hotel to Rob Smolka's house for some more gaming. I was pretty beat after 27 holes of golf and 3 hours of instruction but I'm not complaining - I rarely pass on an opportunity like this. Rob and Tammy have a great home for hosting, and by the time I arrived at 7pm there were already two tables up and running. Rob, Tammy, Jason, and Bobby were standing by waiting for me to arrive so we could start a game of El Grande. At the other table a game of La Citta was also getting started. Again, I'll provide more pics than commentary.

This one has been on my "need to play" list for some time, and I made a special request to the Arizona Boardgamers before coming down to get this one out. First, the game is just beautiful - the colors fit the Spanish theme well, and the colors are distinct enough to quickly count cubes. 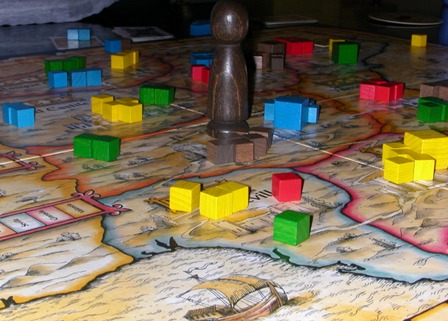 El Grande is an influence game - players are trying to move their caballeros into regions of spain to gain control by having a majority position. Actions allow players to introduce new caballeros, shift their own and others' caballeros, and interfere with the actions of others. Turn order can be very important, and each player has cards numbered 1-13 that are played during a turn order auction. Bobby, Rob, Tammy, and Jason joined me, with Jason doing a great job explaining the rules. I've learned that I have a hard time focusing on all of the rules at the start - I'm lacking any context from which to understand the details, so I usually like to get started quickly and figure it out as I go. As a result I usually have a poor showing in my first play of most games (OK, some would say I have poor showings in most subsequent plays as well, but that's a topic for another day). 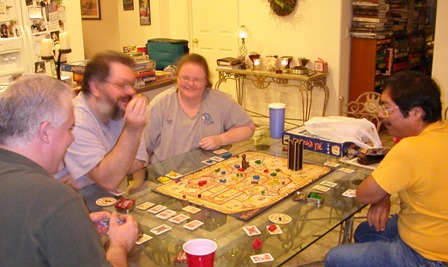 I was impressed with Jason's play of this game - he clearly thought through a strategy early on and stuck with it. Rob hung close most of the game, with Tammy, Bobby, and I pulling up the rear. I wish I had a detailed game log of this one to better understand Jason's approach, but I'm fairly certain he focused on getting a presence everywhere he could, even settling for second and third in most of the regions. My greatest frustration was turn order - I didn't get some of the nuances around positioning leading up to each of the 3 scoring rounds, and I ended up still holding my 1 and 13 cards in my hand at the end of the game. I didn't do too poorly though - I finished third behind Jason (see how far he got on scoring track below) and Rob. 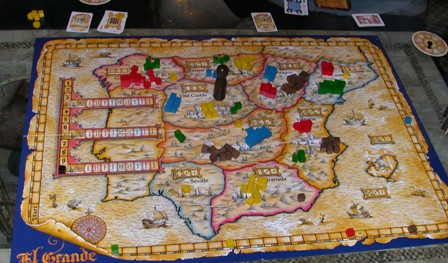 Not much to say about this one since I didn't play it, but I do have a picture to show. I think that's Matthew on the left, and I think that's Scott on the right. Scott won the game. 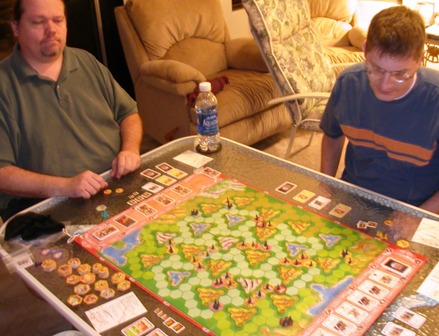 I really don't like memory games. This is a cute little filler, but I just don't like games where I need to keep track of card counts in multiple buckets. I don't mind tracking broad strokes or trends, but detailed card counting just isn't my gig. I only managed to complete one pizza order, and Jason won again.

Bobby asked for me to teach him this game, and Jason and Tammy joined for a 4-player game. I'm getting pretty good at teaching this game, and this was a very sharp group so they picked it up quickly. As good as I am with the expropriation rules, I still haven't made it through a game without at least one missed street tile placement. I am getting better at playing this game and learning the right tricks to force street placement. Jason and Bobby were very quick at picking up strategy, and it was a close match. Tammy got herself in a bind early by being forced to place her fish shop before she wanted to. I had a similar event happen as my last playing at Kevin's house - I had three solid positions cemented, then got a short route turned into a max route do to an end-game misplay. Jason won with 7, Bobby scored 9, Chris 18, and Tammy 22. We used gold for tie-breakers.

It was time for me to leave after Fresh Fish, but there was a game of Mexica going on so I took a few pictures. I think that's Matthew, Rob, Jeff, and Jeff's wife. If I screwed up any of the names, post a comment and I'll correct! 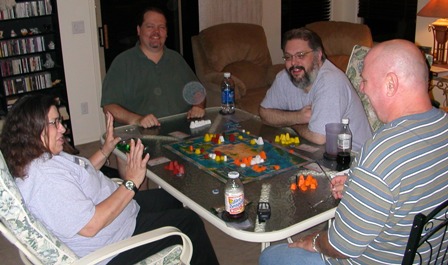 My thanks go out to the group for their hospitality, especially Rob and Tammy. Let me know if you ever head up my way!