How about we catch up with some recent gaming?

I've been playing this about every week for the past month. It only has 16 cards and is extremely light, but still a nice diversion. It reminds me of Fluxx in complexity but Love Letter has a much better flow to it with short rounds and a total game length of about 30 minutes. It definitely plays better with 3 or 4 players than with 2, which generally devolves into who draws the better cards. 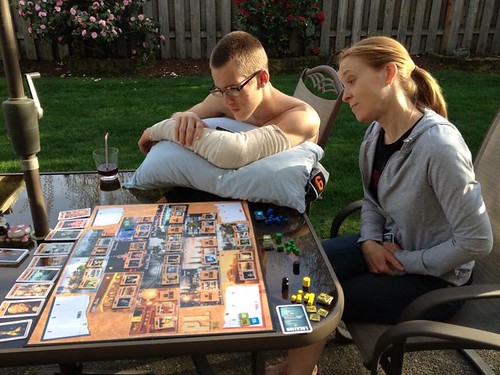 P.I., a surprise game from Martin Wallace given his tendency towards deeper games, is a deduction game similar to Clue or Mastermind but with a few different twists:

Julie, Matthew and I played and enjoyed it - P.I. is a keeper for us.

I asked my game group if anyone has a copy and Doug obliged by bringing a borrowed copy to my game night this week. I've been calling this Dominion meets Elfenland (but without much of the route planning involved in Elfenland). The theme and cards are very cute with a light fantasy theme and some funny card color text. We played the partnership 2 vs. 2 game and I think everyone enjoyed it. I'm still on the fence about acquiring it - I'd like to play a 2 player long game first. 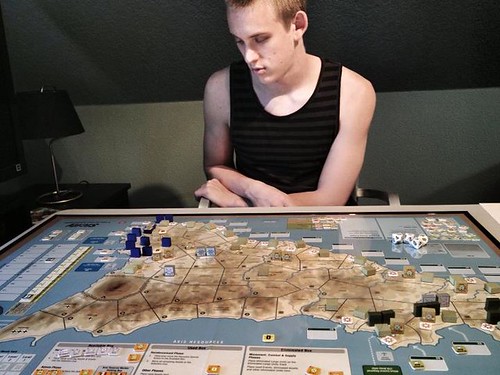 Whenever I get a free full or half weekend day with Jacob or Matthew I try to squeeze in a deeper strategy or war game. Jacob and I agreed to play FAB: Sicily a few weeks ago, a game covering Operation Husky, the Allied invasion of Sicily in WWII. This game uses the same series rules as FAB: The Bulge and FAB: Golan '73 will hopefully will come out sometime next year.

This game has the Axis player (moi) setup the less-than-stellar Italian beach garrisons, then the Allied player choose their beach landing strategy. I made some awful newbie choices in my initial setup and could not contain Jacob's invasion forces. The Americans pretty much wiped the map of my garrisons and the meager German panzer and infantry forces present on the NW side of the island. I'm eager for a rematch playing the same sides so I can try a different setup strategy.

We've taken the dive into this amazing miniatures game. The miniatures are extremely well produced and the game is easy to get into and plays quickly. I'll write about this some more as I produced my own star field play mat and we have a few more minis to try out in a full game. We might get to try this Sunday evening. 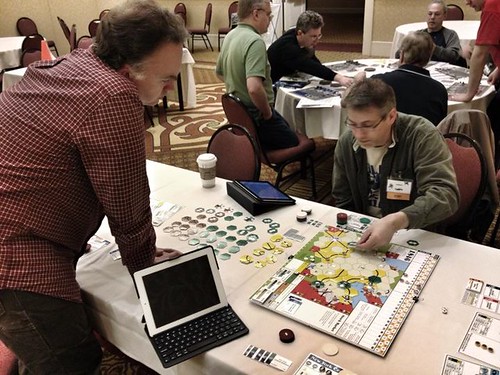 At GameStorm 15 I played this 18xx game with Greg and Matt. We had a pipe dream that we could play this in four hours but only managed about five. I really like this 18xx game because of its draft mechanism for buying initial private companies. This makes it much easier to introduce new players as they don't need to worry about company valuation, just relative value of the different companies offered.

I had a rare weekend with nothing scheduled and without Jacob or Matthew to play a long game with me, so I endeavored to attempt (for the third time) to teach myself Fields of Fire, a solitaire complex game of infantry tactics. This game has been hampered by poor rules with a very steep learning curve, but I will say that it was worth my time and I will play this again within 2 months. With much help from the revised rules, Youtube videos, and a few player help guides, I was able to complete the first scenario in about 8 hours total play time spread over a Saturday and Sunday. The game has a campaign / role playing element to it as you get to rebuild your squads between missions and level up some of the leaders and units.