Last weekend about 19 of us from from Troop 224 in Sherwood, OR ventured to the Columbia Gorge for an overnight backpacking trip on the Eagle Creek / Benson Loop trail. This is my trip report with some photos (see the rest of the photos on Flickr).

This hike has two distinct halves -- a meandering stroll up Eagle Creek (we encountered probably 6 different distinct groups on the trail) followed by a very difficult ascent up to Benson Plateau. I created a rough pedometer trace of the route, but be warned that the actual hiking distances are longer as I'm not capturing every twist and turn of the path. We are training for Philmont so for the past few hikes we have divided up into our separate crews. Julie, Jacob and I took the lead crew (plus two youths and one adult) and departed first. 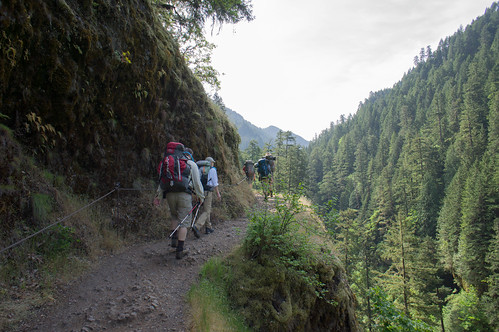 The Eagle Creek trail was in full splendor with rushing water, brilliant wildflowers, and two scenic bridges crossing Eagle Creek. Roughly 5 to 5.5 miles into the trail (just past Wy'East Camp) we found the junction with the Eagle-Benson trail. This was a good place to stop for lunch and wait for the next crew to catch up. 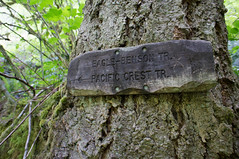 There's no easing into the climb to Benson Plateau. The trail immediately rises as we begin the ascent from about 400 ft to 4,000 ft in less than three miles. 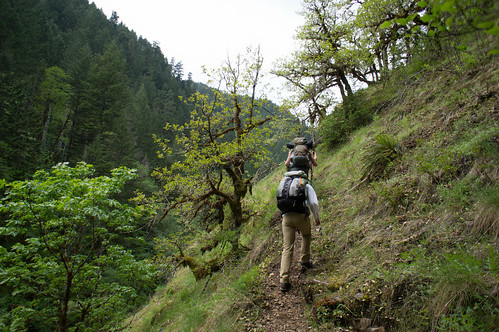 There some sheer, exposed cliffs to traverse on the climb, but with the dry packed trail we never felt in danger. I can imagine feeling differently in a muddy rainstorm. As we cleared the exposed Eagle Creek gorge and worked towards the plateau, we entered the burn area where wide open trails transitioned to undergrowth and tree-fall. I picked up a bit of poison oak coming through here but I seemed to be the only one. The obstructions were nowhere near as bad as what we encountered on the Tillamook Head trail last month. 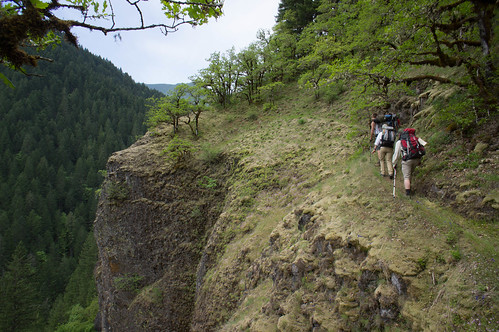 The payoff for the climb was spectacular. As we hit 3,000 feet the views of waterfalls, surrounding peaks, the Bonneville dam, and Columbia Gorge were breathtaking. We were exhausted but still had another 1,000 feet to climb. As we approached to plateau the pine forest began to thin out with easy to navigate trails. 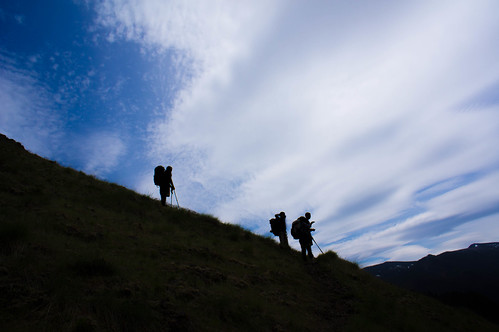 A key milestone was finding the Smokey Springs campsite where we joined up with the Pacific Crest Trail (PCT). The trip across the plateau started easy with mostly flat and wide open pine forest. Before long though we encountered snow pack, sometimes 18 to 24 inches deep. This was not a major concern until about a mile into the plateau where we lost the trail in the snow. Jacob and I were using our GPS and pre-downloaded maps and were getting some conflicting information, but using the terrain as our guide we gradually worked our way to an orthogonal path to what should be the trail and found it within 15 minutes. We started to grow concerned about the two other crews however. 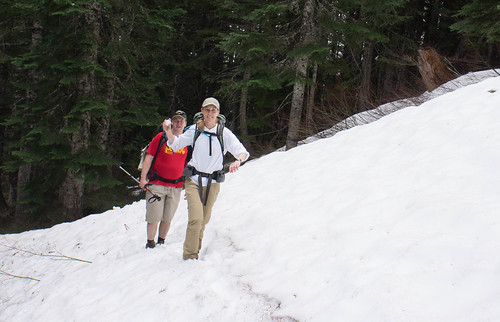 At about 4:30pm, about 6.5 hours after our departure from the trailhead, we found our new home at the Hunters Camp on Ruckel Creek. This is a great camp-site with easy access to water and plenty of flat spots for our tents. About an hour after setting up camp, the second crew rolled into camp (2 adults, 2 kids). They also got lost in the snow but used map & compass to find their way back to the trail. A good test of our navigation skills!

We honestly had doubts about the third crew and whether or not they would make it to camp. Part of me hoped they took our bail-out option and stayed down at one of the Eagle Creek campsites. I worried about them getting lost in the snow forest and dark settling in, but when I reminded myself about how well equipped they were and how they have an adult trained in Wilderness First Aid my fears vanished. Worst case they would have to work their way to the exit path down Ruckel Creek in the morning.

Lo and behold they showed up at camp about 7:45pm, over three hours after our arrival. They were tired but in great spirits. It was great to have everyone together for a warm campfire and good fellowship. 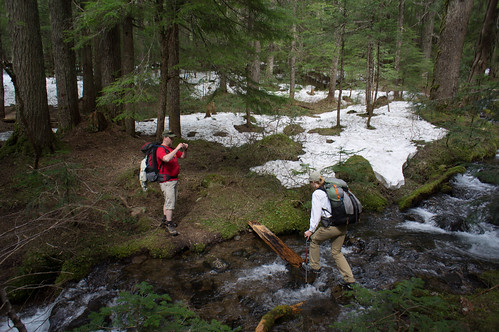 The exit on Sunday is a steep descent down Ruckel Creek. In about 5 miles we descended nearly 4,000 feet. At times we had to slow jog to keep up with the boys. While Julie had an easy time with the climb on Saturday and I struggled, we flipped roles on Sunday. I had no pain (and I was even hiking in my KSO Treks) while Julie's legs started to ache on the descent -- she would pay the price for the rest of the week. 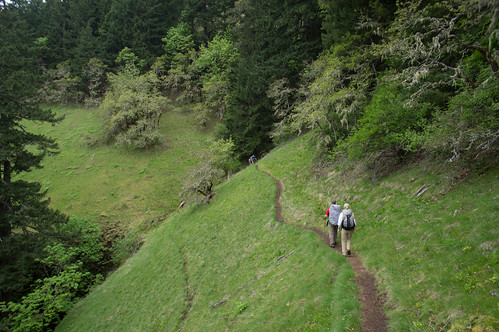 Our descent only took about 2.5 hours and we had some great waterfalls at the base of the creek for a payoff. We finished off our weekend adventure with a simulated wilderness first aid scenario to keep us all sharp then returned to civilization. 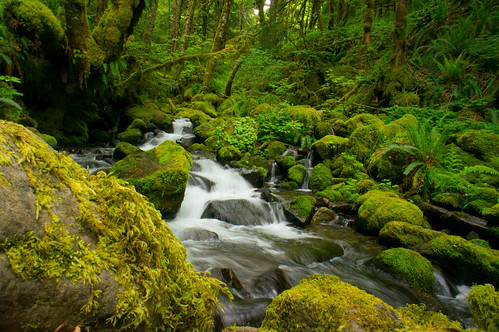 I can see why Portland Hikers has this trail marked as a Lost Hike, but that shouldn't scare away intermediate to advanced hikers. You better be in shape and ready for some map and compass navigation, especially if there's still snow on the plateau. The views and escape from the crowds are worth it!