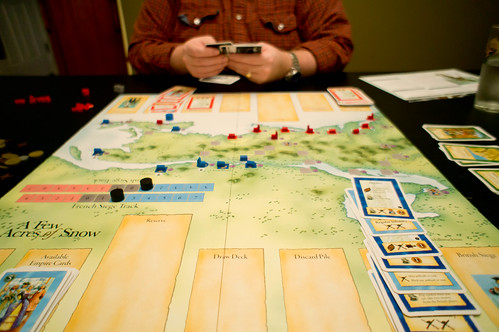 I've had some great, though infrequent, gaming sessions lately. Ken and I were able to play back-to-back games of A Few Acres of Snow, the deck building war game about the French and British conflict in North America. My first play with Jacob earlier this year was a struggle because of the breadth of actions available to each player -- huge surface area of possibilities to explore which often left us scratching our heads.

In our first game I played the Brits, Ken the French. We had almost no direct conflict and focused on settling with periodic raids, just about all of which were blocked. The game ended when the British exhausted their settlement bits and I squeaked out a 1 or 2 point victory. The game lasted longer than I think it should - probably 3 or more hours. Still, we had fun learning the ropes and came away with ideas on how to approach the game differently next time around.

We switched sides in our second game and I came out very aggressively as the French, laying siege along the British northern sea ports whenever possible. We had some very drawn out battles (you can see how many cards ended up locked in a siege in the photo above) but in just about every case I was able to keep Ken on the defensive and often win settlement pieces from him (VPs!). We played the game longer than we needed to as we forgot that if a player captures 12 VP worth of enemy bits then he wins. I did, and I did -- actually I think I had 16 VP before we discovered our mistake. I'm sure Ken is brushing up on his strategy ideas for our next go. 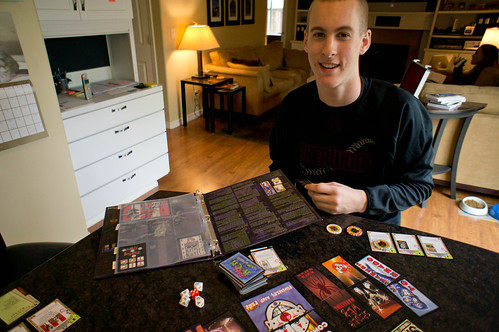 Last Friday Matthew and I pulled out one of the unplayed games in my collection: Filthy Rich designed by Richard Garfield. We played with the supposedly required variant where one the first "tax" die roll is used and subsequent ones are ignored. This is a fun if a bit wacky and chaotic game. I think it dragged on a bit longer than needed with a known outcome (I had lucky die rolls against Matthew, a rare occurrence). This is a very innovative design with the game being played in a binder with plastic card sleeve pages (imagine a book holding baseball cards). 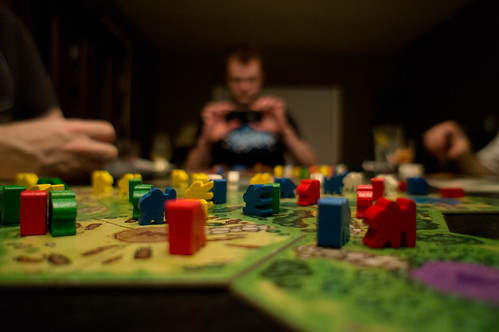 Last night I hosted my game group game night and tried out Power Grid: the First Sparks. This is supposedly an easier, streamlined version of the original Power Grid, but I'm not sure I agree. While it takes away the auction mechanic, which can be imposing for new players, the mechanics surrounding the variable game board complicate things beyond the original Power Grid. I didn't get the feel that this has the same compelling market tension as the original and can't imagine wanting to play this instead. Even when teaching new gamers!