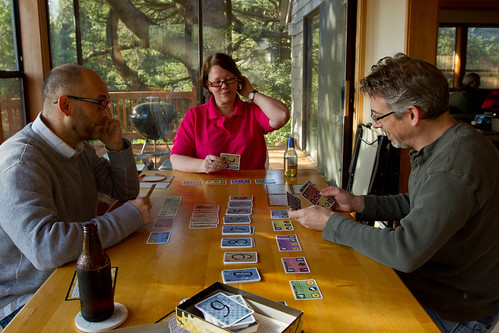 Earlier this month I hosted my 6th gaming weekend out at Salishan for my local gaming buddies (see prior outings: 2005, early 2007, late 2007, 2008, early 2011). If you'd asked me going into the weekend how many of these I'd hosted before I probably would have answered "about three". Time flies.

A better writer than I already wrote about his experiences at the event but that won't stop me from sharing some of my thoughts from what turned out to be a fantastic weekend. Sure, the gaming was fun but what makes it special is the amazing people that come along. We all know each other well enough to be very comfortable hanging out together.

This year I ran a "metagame" throughout the weekend with hidden goals whereby folks could earn "Brooks bucks" to use at a prize table auction on Saturday night. I think it went over pretty well and added to the fun and interaction of the weekend. 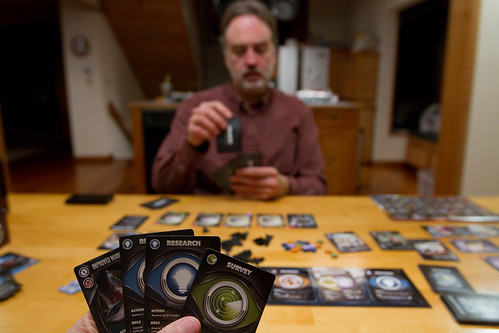 Greg, Ken and I drove out together and were joined later in the evening by Jeff, Matt, and Doug. We played Eminent Domain followed by Innovation. While I've enjoyed Eminent Domain I'm not sure it is going to hold up next to other similar games. I also have a bad habit of picking a contrarian path to every other player ensuring I never get to follow their leads. Innovation on the other hand continues to shine for me. It can be a wacky game but I love how much comes in such as small box. 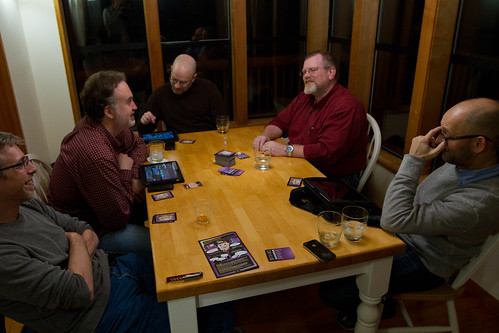 Our "party game" for the weekend was Train of Thought. For some reason both times I've tried to teach this game I start off by screwing up the rules, which generally leads to a bad experience for everyone. The basic idea of the game is this: one player draws two cards. On one card will be a secret "destination" word, on the other the starter word. His job is to say a three-word phrase using the starter word hoping to lead the others to the destination word. For example, if the destination word was "forest" and the starting word was "shoe", he might say "shoes good for" in the hopes that someone will say "walking". The other players get to respond each with just a single word. At any time the leader can construct a new three-letter phrase using a word another player said. So in this case if someone said "walking" the leader might say "walking in trees", hoping to eventually link to the destination word "forest". The mistake I've made both times when starting? Failing to realize that the leader can use new words offered up by players to create a new three-word phrase. Very important rule, and pretty much the heart of the "Train of Thought" title. I swear I'll get it right next time. The game is fun when you play by the rules. 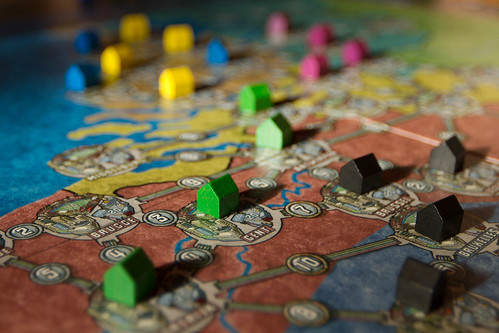 Friday was a mix of quick and easy games like Famiglia, Ascension, and The Red Dragon Inn along with meatier games like Power Grid: Benelux and Game of Thrones: the Boardgame. The only stinker of the day was 51st State which Jeff graciously offered to teach but was borderline incomprehensible to me. There might be a good game in there but why bother wading through horrendous rules and poor human factors when there are so many better choices out there. This is no fault of Jeff's -- the game is the issue. We aborted about half-way through. 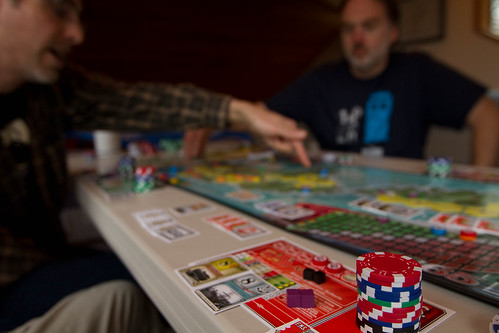 On Saturday I spent about seven hours getting thoroughly thrashed playing 1865: Sardinia. I've had a hard time playing 18xx games successfully lately, but fortunately my enjoyment hasn't diminished. Sardinia is a nice entry into the genre, but it is still a longish one. The time it saves in not having to do train route optimization it more than adds in complex corporate mergers. 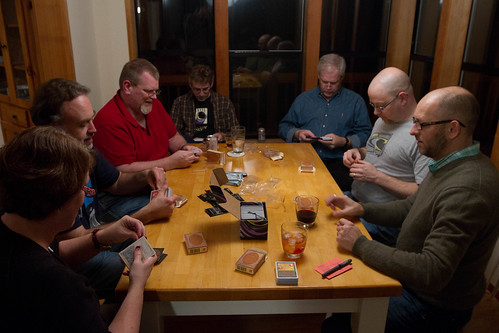 The day ended with two special events. First, an 8 player sealed deck Magic: the Gathering tournament using some old 3rd edition / revised starter decks I've been saving for over 15 years along with Ice Age and 8th edition boosters. For some folks this was their first foray into Magic and I think everyone had fun. Finally, we had our "Brooks bucks" auction with some great games auctioned off (Eminent Domain, Twilight Imperium, Settlers of Catan, and more).

Oh, and we drank just a bit of bourbon and rye whiskey on Saturday evening. 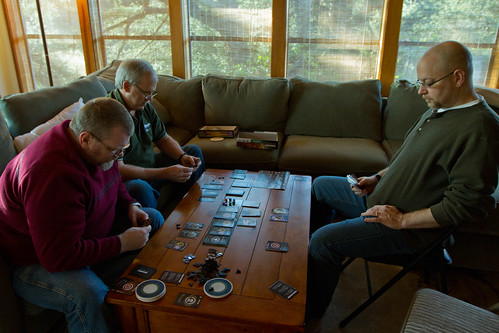 While cleaning up on Sunday (with very generous help from everyone that attended) a lot of gaming continued: more Innovation and Eminent Domain plus I got to play two-player Agricola with Greg, possibly my all-time favorite game. I think our game was very tight with Greg barely edging me out. We played the variant where you take 10 innovations and 10 occupations at the start and select down to seven. I'm very excited to try out Ora et Labora, the latest release by Rosenberg. Folks are saying this one tops both Agricola and Le Havre -- I'll believe that when I see it!

Thanks to everyone that attended for being outstanding, helpful guests (and great cooks). We'll do this again next year.