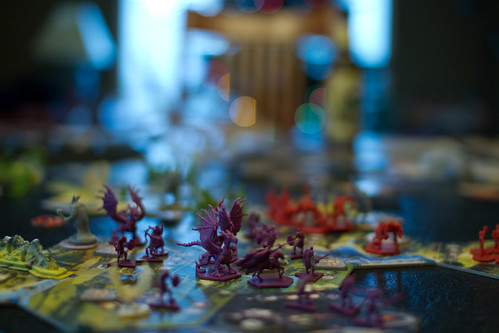 Last weekend I got together with Dave and Chuck (strange fact: all three of us were born within 1 month of each other) to play Runewars. I first played this game last month at BGG.CON and thought was good but maybe not great. I was caught off guard by some of the tactics cards and as a result it felt even more chaotic than I expected. Before I even left for the convention Dave and I agreed to get together on a Saturday to play together and I was certainly willing to try it again.

We played with the Banners of War expansion. This adds extra creatures to each faction, extra development upgrades for strongholds, enhanced cities, and probably some other cards and such that I'm forgetting about. It didn't over-complicate or lengthen the game and I think it is an automatic play-with-the-expansion-if-you-have-it.

The board layout ended up with Chuck having a narrow one-square path to the rest of us. As if this weren't enough, that single choke point also became water because of an event, meaning that units and heroes could only pass through in the winter (when frozen over) or by flying. This created an interesting dynamic where Dave and I were able to battle first while Chuck gradually built up his forces for an eventual winter attack. This led to no end of "Winter is coming" references. If only Chuck had played the undead faction instead of me. 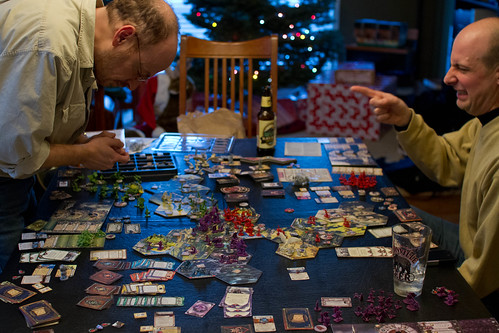 I just realized I'm diving into minutia without even giving an overall sense of the game. Here's a brief summary:

Our game played out to the end with Dave nearly achieving a seven rune victory. The runes themselves are hidden (though the number of runes is technically trackable but difficult to do so) which can make for some tension in figuring out who is in the driver seat. Chuck was forced to choose between attacking Dave or me on his final conquest action and pulled off an amazing combination to take a rune away from Dave -- the right choice because he would tied in runes with him but way ahead in influence, the first tiebreaker. While this pulled Chuck ahead of Dave, it tied him with me (I snuck in with six runes myself) and one on the second tiebreaker. A virtual tie but I'll claim the victory proudly.

The game is a bit long - it took us about 5 hours of playtime and I'm wouldn't expect it to play in less than 4 hours unless each player was very experienced and turns went faster. We had a blast and I look forward to playing again. I want to try out the new game Eclipse before deciding whether to buy this one though - I've heard it is similar but possibly more streamlined.