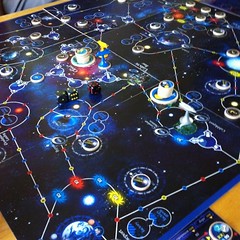 I ventured downtown to the Sellwood area yesterday to enjoy my first ever play of Merchant of Venus at Subhan's home along with Rachel and Matty. This is a classic Avalon Hill game from 1988 that I acquired about a year ago but remained unplayed. Eric Summerer did a nice video overview of the game earlier this year.

Merchant of Venus (MoV) is a game of space trading game where players attempt to maximize the productivity of trade loops while taking advantage of various random elements that can change the demand and profitability of goods and passengers. This is a logistics (pick up and deliver) game with enough theme and random elements to keep it from being dry and solvable.

This was a first play for three of us, and Subhan had only played once about three years ago, so it was slow going for a while. We each employed very different strategies (likely unintentionally). Matty acquired a bulky but slow freighter that allowed him to carry large groups of goods but with risky transport options. Rachel and I went for speedy, smaller transports but she invested heavily in space ports and factories while I dashed around the galaxy picking up passengers while trading goods opportunistically. Subhan was in the middle with a mid-size ship with more speed. We played to $2,000 which is supposed to be a mid-length game of about 2 hours where players get to experience a solid arc of setup and trading. We played for about 4 hours.

The game finished with three of the four players having a chance to win on the same turn. We each made critical mistakes in the endgame but they seemed to balance. I had to sit and watch Rachel and Matty both experience the displeasure of the dice gods to allow me a chance to win, which I pulled off by getting exactly to $2,000 with a passenger delivery.

One other mention: we played a custom made version produced by local print and play entrepreneur Andrew Tullsen. Fabulous work on this set, makes me wish I didn't just purchase the original game! His recent announcement of permission to make copies of the beautifully designed 18AL was too hard to resist so I did place an order for that.