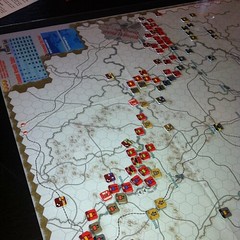 I made a plea for help a couple of weeks ago - there are two wargames in my collection that have languished unplayed and I needed to make the stay or go call. Would someone please teach me Panzer Grenadier orA Victory Lost? Doug answered my call, especially kind of him given that it would be just the day after he returned from a cruise. The game would be A Victory Lost.

A Victory Lost is a classic hex-and-counter wargame with two components that were very appealing to me: headquarter-based activation and control, and randomized activations. The main appeal of this model is reduced decision space - rarely are you asked to contemplate game-wide movement and combat as your choices are generally more localized. The activation is randomized by each player having counters (chits) for each potential HQ that can be activated. Players make some choices about what the potentials are, and those chits are placed in a cup and drawn. The Soviets have a special Stavka chit that activates every HQ while the Axis have a Manstein chit that allows for the activation of any single HQ that player chooses.

Doug played the Axis while I took on the Soviets (more stuff to do and the initiative would be mine, so better for learning the game). I did minimal research on strategy, focusing primarily on choosing what HQ chits to have as potentials and where to focus my energy. My chit choices: Stavka (required), 5 TkA, 1GdA, 6A, and 3TkA. My thrust: straight up the middle.

We played only two turns (all the time we had, but plenty for me to learn the game).

That's where we ended it. My take is that I'm probably doing better than I could have hoped on German unit eliminations (3 infantry, 1 panzer) but not as well as I should be on land grabbing. I took a picture of the final configuration -- you can see the bulge in my line in the middle with a gaping hole to the north. 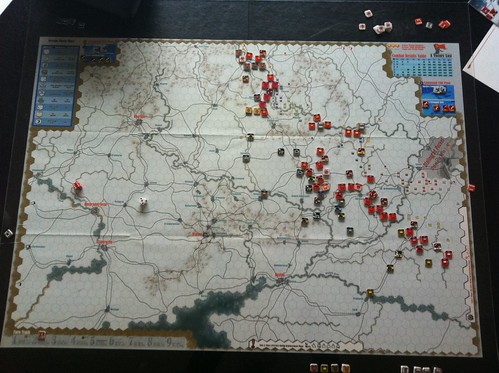 As usual Doug was an adept instructor and this is clearly a game I will keep. Need to find 8 hours to set aside for a full game.