The last week has brought a big increase in quality game time. I'm especially appreciative that I've had some great 1x1 gaming with several folks that I should game with more frequently: Julie, Matthew, and Ken. Still trying to get a big card-driven game on the table with Jacob - maybe some Barbarossa to Berlin this weekend? 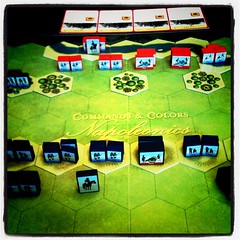 Ken and I tried out the new GMT release Command and Colors: Napoleonics, the latest in the C&C system that includes Battle Cry, Memoir '44' and C&C: Ancients. The three hours I spent stickering the blocks paid off as Ken and I found this to be a worthy addition to the series. What we like: more asymmetry in the core units by nationality, nice abstractions for the interactions between cavalry and infantry, and most of all seeing unit attack strength generally corresponding to current unit strength. 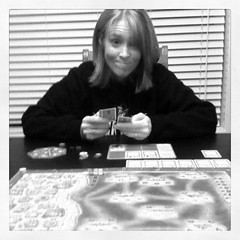 I've played Macao twice in the past week - once at a game day I hosted then on Saturday night with Julie. She and I haven't delved into two player deeper games for quite a long time (Macao isn't that deep, but compared to Lost Cities it is). With frequent interruptions it took about 90 minutes so this could fit nicely in a 60 minute budget. I think Julie liked it, and she certainly "got it", beating me by about 5 points.

Speaking of the game day, we had about 14 people over for a great day of gaming last Wednesday. Games played included Dominant Species, Macao, Stone Age, Dixit, 7 Wonders, and Age of Industry. This was my first play of the final production version of AoI (I was a play tester but the game changed quite a bit) and I think it definitely improves on Brass. Played the New England map and look forward to trying the other side. I made several rules blunders, relying too much on my experience with Brass. The key one is how ships flip over - the coal supply and market attached to the ship must be emptied first. We missed this with the first three ships played (flipping them right away), so we opted to stick with that for the rest of the game.