Gaming, but obviously not blogging. Let's talk about a few recent sessions.

Matthew and I dug out Duel of Ages with the first two expansions and it was good. The components could be nicer, the cardboard tiles are warping in their old age, but the game was enjoyable though not terribly interactive. I think we fought against each other 2 or 3 times. Still, the time limit approach to the game keeps it bound and we think we'll keep this one around. 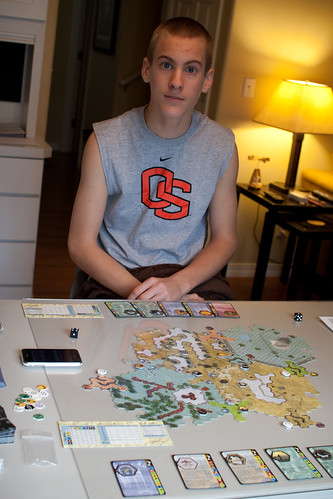 One of my un-played games was Risk 2210AD, a highly regarded Risk variant set in the future (oh, 200 years or so I guess). I can see why folks like it - similar to the Lord of the Rings Risk it is time-bound and keeps everyone moving. The special technology cards add a nice twist as does the moon, though only Matthew and I spent any time there. I think if we want to play Risk we're more likely to pull out Lord of the Rings. 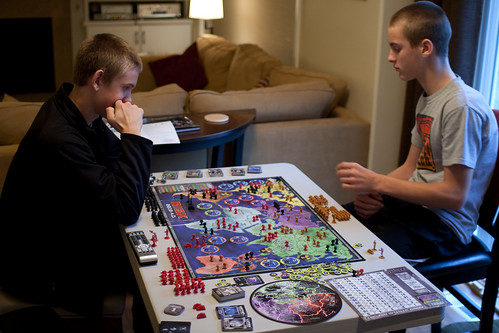 Over the holidays we did a bit of family gaming and broke the shrink-wrap off of Buy Low Sell High. Classic but in my opinion underwhelming Knizia here. Maybe because I finished dead last? 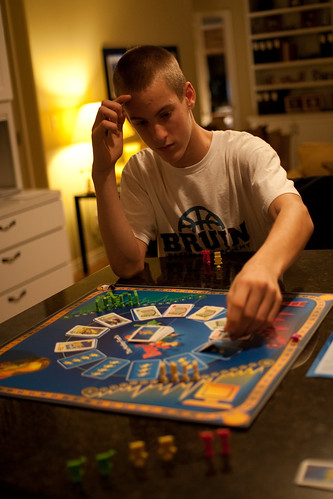 Ken and Brandon came over for day of gaming and we enjoyed the cooperative game Red November and our first-ever play of Pacific Typhoon. Red November is a gnome-oriented (!) submarine survival game. There isn't much depth there but we had a good time, though I'm not I like the "bail out" option a gnome can take towards the end - seems to break the team spirit and doesn't feel as right as a the traitor in Shadows Over Camelot.

Pacific Typhoon is the redone, Pacific theater version of Atlantic Storm, a game I've never played. We all enjoyed it and I'd like to explore it some more to see if there's a durable game in there. 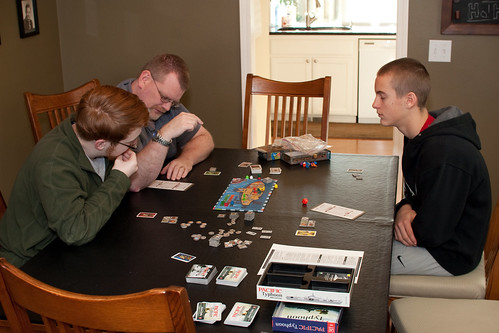 JD, Ken and tried out Hansa Teutonica, the only game I purchased at BGG.CON. I see why people are raving about this game - many ways to score points, quick turns, the game flows very well. Be warned though that this is a dry, mostly themeless classic Euro game. Writing this does make me want to pull this out again for another play, though. 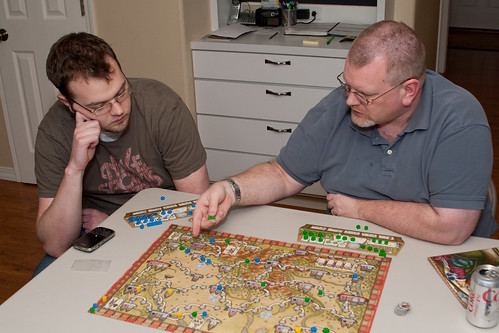 A couple of weekends ago I ventured up to the GameStorm game day in Vancouver WA for some 18xx action. Chris Shaffer was kind enough to teach two full groups how to play the recent Mayfair games new look at 1853. Did I mention that my game group has gone a bit 18xx crazy lately? They have, and so have Jacob and I. In fact I might try to talk both boys into some 2038 action this weekend.

1853 is a bit wacky but very enjoyable. It has a very unique (to me) opening auction technique with sealed bids that determine the seating order (and initial priority deal). Folks overbid by much early on and we did a restart, but in the restart I was essentially forced to start a minor company. I had fun operating in the south and working my line up but was aided greatly when Chris Shaffer started building his hybrid line down south to join me. This opened up my minor to some big runs, and I raided and dumped the last major company to get some nice trains. The wackiest parts of 1853 (relative to other 18xx) are that dumping shares doesn't bring down the stock price, and you aren't obligated to hold onto a company if you are the director and sole shareholder. I managed a win by a small margin. It was great to play with some old friends and I think I'd like to add this one to my collection. The bits are very pretty but I wouldn't say the game was designed for function - some issues with colors and differentiation. 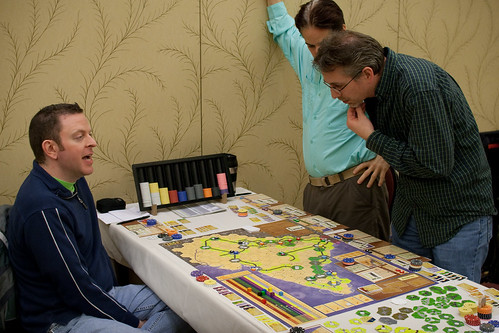