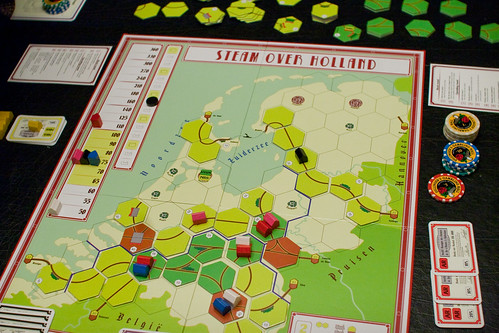 I'm three plays into the wonderful introductory 18xx game Steam Over Holland and I'm confident in saying that while it stands up perfectly for beginner players when played with three, it probably needs some adjustments when played with five. All of you 18xx sharks out there: don't jump to conclusions unless you've actually played a learning game of SoH with 5 players! 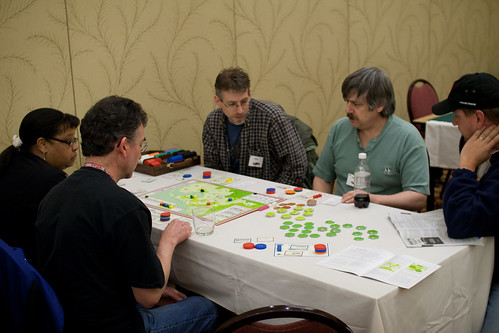 When new players come to 18xx I think they want to experience all aspects of the game (managing their stock portfolio as well as operating a company) so it is only natural to see all 5 players in a 5 player game start a company. There's enough cash in the game to do so, and it is relatively easy to keep the companies capitalized early on. While companies start with little capital, they can sell a single share to the common pool each operating round without dropping their stock price (as long as there is less than 50% of the shares outstanding in the pool).

The problem comes during the mid-game train rush - even a decent player can get caught off guard as the 3 and 4 trains get gobbled up. On a forced train purchase, it can be difficult to come up with the necessary cash because it is likely impossible to sell any shares to the common pool. In my first game one player nearly went bankrupt (and was essentially out of the game), and in my second game two players nearly did.

I'm sure there's a happy path in there somewhere when playing with five, but it just shouldn't be that hard. Players should feel some tension in how they compete with the other players, but they shouldn't feel threatened to get kicked out of the game. And a beginning player shouldn't be forced to play their first game just investing in other companies - operating a company and laying track is part of the experience. 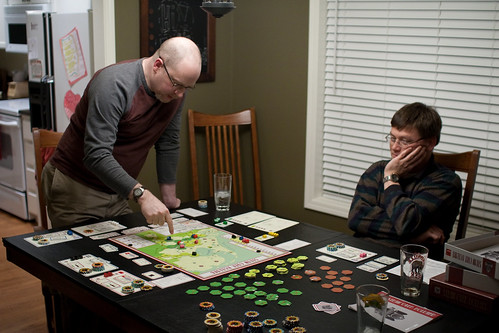 I'm happy to report that the 3 player game last week ended in a much happier place. While I won the game fairly handily, George and Doug were in it until the end and where not in serious jeopardy of seeing a company fold. I think this is because players can confidently start a company each and push more cash into those companies. The train rush through the 3s and 4s is also easier to navigate.

My guess is that the problem could be fixed with a bit more cash for each player in the 5 player game. Or perhaps a few extra "3" or "4" trains. I'm not sure if I'll get the chance to try as I probably wouldn't even play the game with 5 players again, instead opting for 18AL or some other similar "trusted" first 18xx game for that number of players.