I received a (rare) complimentary copy of a game to review - Dragons of Kir (publisher page). Jacob and I sat down to play last week, and here are my thoughts on the game.

Summary: A promising game that suffers from poor components and a turn sequence that I'm afraid will lead far too often to draws. It just doesn't stack up well to other 2 player abstracts on my shelf, notably the GIPF series and Ingenious.

Mechanics: Players alternate placing tiles from their hand on the game board grid to influence the movement of four different dragons. The goal is to have one of the dragons attack your opponent's home base while protecting your own base. The tiles are Asian themed (think Chinese dragons) and usually either draw a dragon closer or push a dragon away, allowing players to force the dragon to approach certain areas of the board.

Components: The game would shine with quality wooden components for the dragons and home bases, but instead the publisher provided scored cardboard to fold and shape into the appropriate pieces. As a publisher I can relate to the manufacturing choice - I'm sure it was a cost factor. The board and tiles are very decent quality. 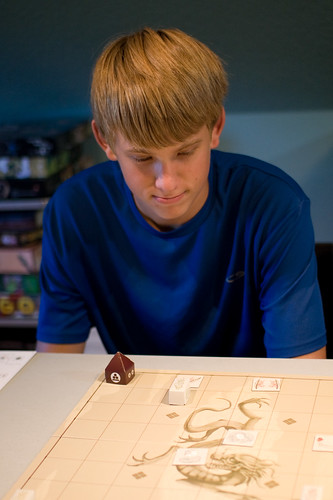 Thoughts on the Game: Jacob and I played two games, each to draws, and came away feeling a little bored and disappointed. One issue is the player sequence - the first player always places a tile first, followed by the other player. Then the dragons move. This means the second player always gets to respond to the first. I don't like this flow in abstract games - nothing wrong with a first or second player advantage, but the break in flow to move the dragons magnifies the effect throughout the game. 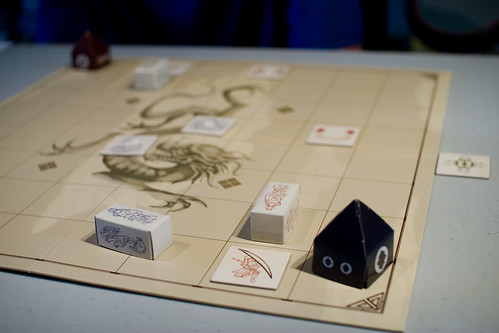 I'm sure if we played several more games we would have found some solid strategies, but in both of our plays (we alternated start player) we found it far too easy for the second player to play defensively and force a draw. If you want a game that involves some randomness with tile draws combined with solid abstract play, stick to Ingenious.