My goal was for day 3 to be a day of rest for me - no events to run, ideally playing a longer thoughtful game. Downtime wasn't a big concern as I knew I'd have a few errands to run (like checking out of the hotel and gathering my crates of games). Sounds like a great day to play an 18xx game, which was exactly what happened.

Nate Sandal hosted 1825, with the idea that he could scale the game up or down depending on how many players joined. We had 4: Nate, Matt Riley, Kenny, and me. Nate chose to play unit 1 and unit 2. We started at 8am and hoped to be done by noon. How foolish of us. 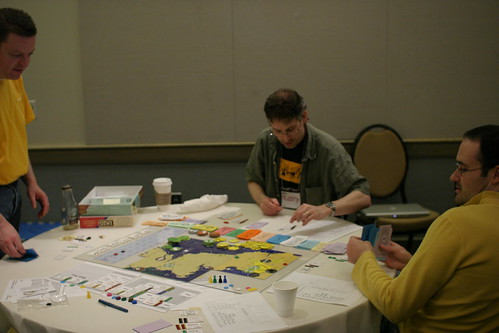 Kenny was brand new to 18xx, Matt had a small amount of experience (1 game, I think). I've got 3 games under my belt, and Nate has played a bit more than that. The rules in this game are pretty straightforward, but we may have played with way too much money in the bank thus prolonging the game. With the combined units, we had quite a few companies operating - 2-3 for each player. This resulted in quite a bit of downtime, which wasn't a problem for me this day but in normal circumstances might have been a detractor.

Side note: Playing 1825 made me appreciate the amazingly good quality of the Deep Thought Games productions. So much thought goes into the human factors in those productions, ranging from the tokens to the company cards to the on-board hints. The quality is even more striking when you play an 18xx game that isn't produced by Deep Thought (like 1825). Knowing that Deep Thought can't be making much money and that it is mostly a labor of love, I'm compelled to pick up a few more games while they are still available. I get the feeling that at some point they'll just decide that their time is worth more.

The biggest challenge for me in 1825 was understanding the tile upgrade paths. I tend to play these games intuitively without a lot of route planning beyond the next turn or so, but the restriction in tiles and upgrades makes advanced planning a bit more critical in 1825. 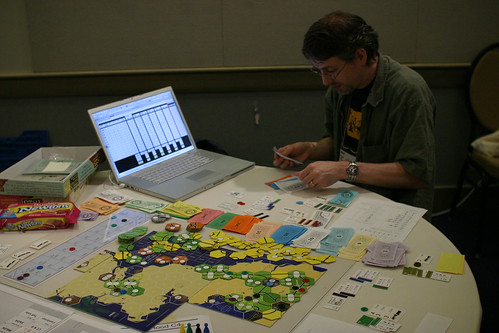 Matt brought out his PowerBook to start tracking money during operating rounds and to calculate the final scores. This is a huge help, especially given that we were using paper money which I think slows down the game (relative to chips). Final scores:

I somehow continue my streak of solid 18xx showings. I've won 3 out of the first 4 games I've played, and I'm not sure how. Jacob and I plan to play 1889 this Sunday morning (well, at least I plan to, I haven't told him yet) as I think he might really latch onto this game system with a shorter, smaller introductory game.

Speaking of Jacob, after we left the convention we drove over to Flying Pie pizza to meet one of my oldest friends - the Smiths, who were my next-door neighbors in Indianapolis from 1978 - 1982. Debra (check out her husband Chris Hornbecker's photo gallery) lives in town here and just had a baby 3-4 weeks ago, so my old best friend Robert and father Jerome were in town. Great to see old friends like this, and Jacob and I managed to get in a game of Knizia's new Dragon Parade while waiting for them to arrive. Jacob quite likes it and I agree - this would have been a great game for my games class this year. I think it is less interesting with 2 players than with more, but could get quite chaotic with 5. 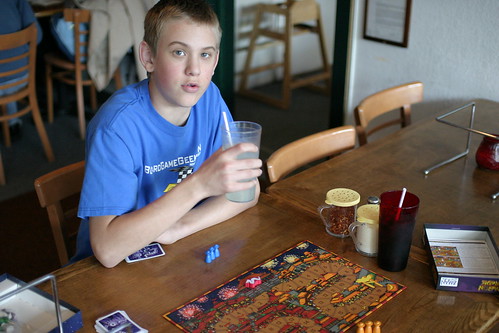