I hosted our Tuesday night gaming session this week and got to break out a couple of Essen releases that haven't seen much action since my return.

Mike spied Die Baumeister von Arkadia on my shelf and we agreed it would a good choice for the 3 or 4 players we were expecting. I'd been staring at this game on my shelf for sometime wondering why I hadn't played it since returning from Essen - it was one of my favorites there. 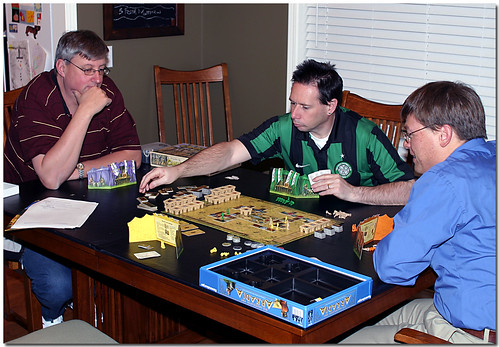 The game taught and played very quickly. The one strategy I remembered to convey is to not wait too long to use your flags to cash in seals and get new workers - the game can end very suddenly and it is hard to win if you've not managed to get your works out generating seals for you. Peter got the knack of the game very quickly and won by a decent margin. We played the game in about an hour - great game value for time invested. 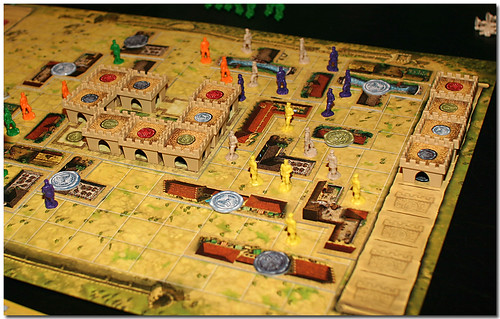 Next we played a press-your-luck chicken game that Peter made. It has some interesting mechanics to it but something wasn't quite right. We may have played a rule or two incorrectly. I'd be willing to try it again after some review.

Peter had to go so Mike, George, and I elected to play the much derided Alhambra Dice Game. Make sure you try this game before you write it off - it isn't nearly as bad as many are saying, and there are some interesting choices to make at times. Still, the luck of the dice rules and the best laid plans can be for naught if the dice don't agree with you. 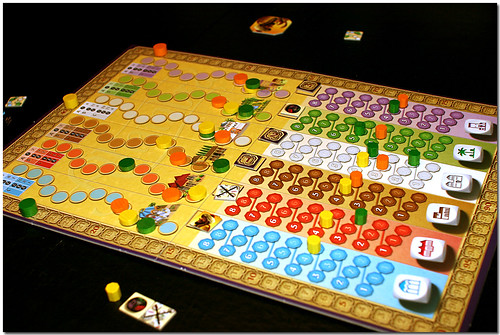 My one complaint with the game is that it is too long. It took 90 minutes to play a full game, and it doesn't hold up well alongside Arkadia. Perhaps a game with four rounds, scoring after the 2nd and 4th, would be better.