Time to catch up on some recent gaming!

Two weekends ago Jacob and I tried to take on the full game of Through the Ages. Jacob has been itching to play this again and I was happy to accommodate - this was clearly one of the top games I played in 2006.

The last time we played we tried the advanced game and we were excited to experience the full experience - mostly because we wanted to get Bill Gates as a leader. 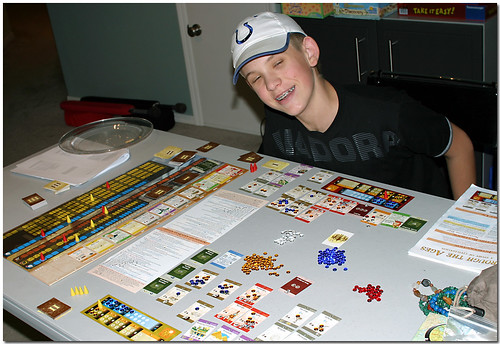 I did a much better job this time around managing my military. I wanted to make sure I didn't fall too far behind him and get sent into a downward spiral as we started to reveal events. This strategy worked out well, especially coupled with Michelangelo - I had a stable military with some accelerated culture production that allowed me to race away with the lead.

Four hours into the game, we were easily 2 hours from being done. I was so far ahead that we both agreed to stop the game. The game felt longer this time around, and I'm not sure why. Downtime wasn't bad at all, so maybe it was just unfamiliarity with the rules at the start. Still, I'm not sure I'm prepared to invest 5-6 hours for the full game.

Time to revisit my nemesis ASL, via the second scenario of the Starter Kit #1 that introduces machine guns. If you recall, we made good progress last time we played this but I still expressed some frustration with the rules and jargon. I truly thought we'd be well poised to move on to the next set of rules, but in reality we were right back where we started. As I read the rules, I keep wanting to create my own abstractions to simplify things - I just don't care about the level of realism that the core system offers. The terseness of the rules is such a hindrance, and the index is nearly worthless. Case in point: we were trying to figure out ROF (rate-of-fire) for LMGs (light machine guns) etc. I understand the concept, but I could not for the life of me figure out how you determine if the gun gets another fire. Look up ROF in the index and you get pointed to MG section, but there's no clue there as to how ROF is triggered. Turns out this is explained in brief early on in the rules, and it took 5-10 minutes of reading and re-reading to figure this out. 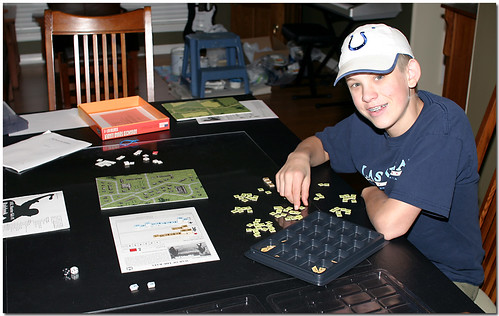 Imagine how frustrating it is for Jacob to sit there wait while I dig through the rules trying to figure out this (very important) rule. This is where being terse is a huge hindrance for the rules - MMP should double the size of the rulebook and include redundant information as appropriate via callouts and other explanatory text. I'm sure the SK is big improvement over starting with the ASL rulebook, but I think there's room for improvement. After receiving Combat Commander: Europe last week I'm forecasting that ASL will never get played again in my household in favor for this lighter, more dynamic squad level game. More on that later.

I've played Big Kini 3 times in the past few weeks and I continue to be impressed with this mostly undiscovered game. Doug did a nice writeup of my last session playing this and brought up a good point about the human factors, but I wouldn't get too concerned about his issues. I think after a play or two the eye candy on the board gets to be pretty decipherable.

I finally got a chance to play Web of Power while over at Mike's a couple of weeks ago. Wow, what a fun but tough game to figure out (strategy-wise). I've been reading about Web of Power (and the related game China) for some time but never pulled the trigger on a purchase, primarily because I'd like to try before I buy. George had played before but needed some time to refresh on the rules, but once we started the game was over within 45 minutes. Matt did an impressive job taking advantage of connections between provinces (I didn't even notice the connections over sea lanes!) and easily beat us. A fun time and I'd like to try China now to see if that would be a good purchase option.