I'm able to mix some business with pleasure this week. I'm here in Columbus, OH doing some customer visits but I'll be able to squeeze in about 2 days at the Origins International Game Expo. I've got some more work to do tomorrow morning, but starting Thursday afternoon I'm free for some gaming until late Friday afternoon when I fly back to Portland.

Tom Vasel and I made a date a few weeks ago to have dinner tonight. We hooked up in the Board Room hosted by the Columbus Area Boardgaming Society (CABS) at about 4:30. Also there was the omnipresent (and omniscient?) Rick Thornquist. We chatted for a bit while Rick and some others wrapped up a game of GemBlo. Tom's been in country for about 2 weeks, spending his time up until now with family in Pennsylvania. He returns across the Pacific to Korea in about a week. 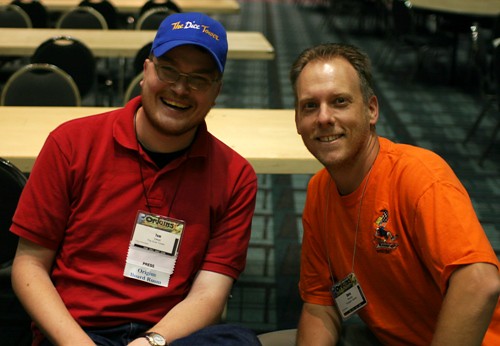 Tom, Rick, and I then hopped in my car to drive over to Valerie Putman's home for some fellowship and BBQ. Met some interesting folks there, including the infamous Mr. Cranky and Jay Tummelson. 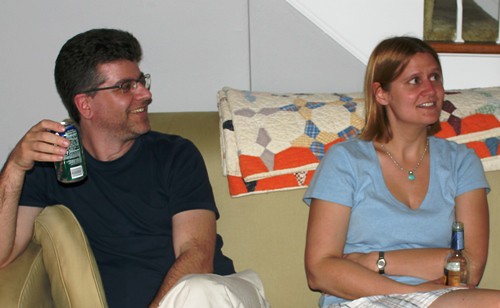 After dinner it was time to return to the gaming hall. Rick, Michael Pennisi, and I sat down to try out the new Mayfair Games release Bison. This is a tile-laying area majority game with some interesting elements. The game is very action constrained (this is a Kramer / Kiesling game, after all) and has some bizarre scoring elements - it isn't uncommon for the player that finished 3rd in the majority to score more points than the 2nd player. It sort of made sense, and I'm interested in playing again to see how I can play better given a better understanding of the system. 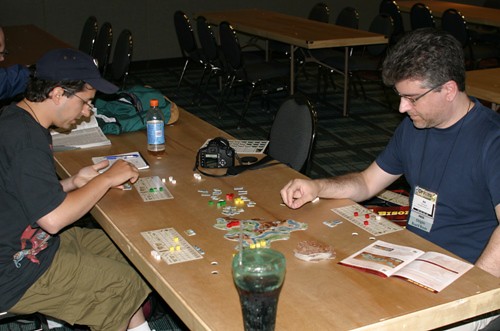 The components are pretty nice, but the theme is pretty thin and the game feels abstract. I was hoping for bison miniatures but I only saw cardboard tiles and wooden cubes. 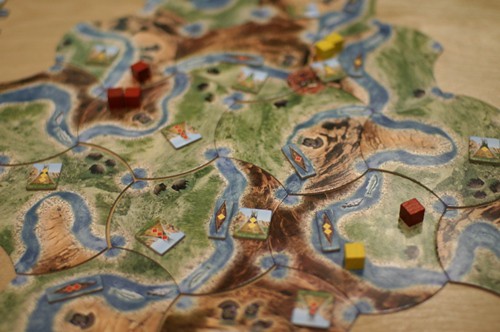 Halfway through the game I was a bit turned off - it felt like a Colovini game with a touch of Trias. It did improve as we finished and I'd like to try it again, though I doubt it will be a purchase. We finished in a dead-heat with 26 points each, with Michael and I also in a tie for the tie-breaker. We had identical scores, though he claimed since he had more bison points than I that he should win. 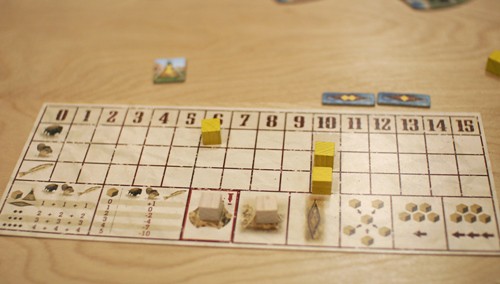