I didn't expect to get any gaming in this weekend. Some work pressures plus an upcoming trip to Alabama were going to steal away most of the hours. I thought perhaps 2 hours would free up on Sunday, and I politely informed Jacob that he would be playing Command and Colors: Ancients with me. He didn't exactly look happy at the prospect - he's been having too much fun with his gravity gun playing Half Life 2 - but I knew once we got started he would enjoy the game. He's played Memoir '44 and Battle Cry quite a bit; in fact he was the Memoir '44 demo monkey at GenCon for Days of Wonder.

Fortunately, Ken called around 1pm asking if he could help knock out another of my unplayed games. I of course invited him (and Brandon) over to join me in a first try of the introductory scenario (Akragas). This is a nice intro choice as it doesn't use the elephants and thereby avoids some special rules (Stampy… He tried to kill me!). 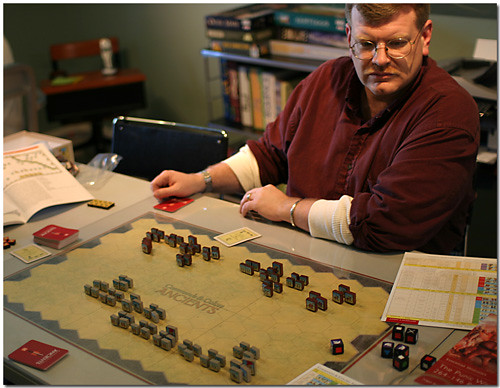 The game is easy to pick up for those familiar with M44, with the most difficult rules being combat-specifics for the different units and the effects of leaders. We kept getting tripped up on the benefits of being next to a leader vs. in the same hex. The rules are well down and I'm sure it will become second nature.

I've read that it is tough for the Carthaginians to win this scenario. I think if I had played them, I would have won because my dice rolling was unstoppable. Case in point: I'm up four victory banners to none, needing one more to win. I play a Darken the Sky command card and fire with 3+1 dice against a full-strength foot unit. I roll four green circles on four dice. I'll leave it as an exercise to the reader to calculate the changes of that happening. 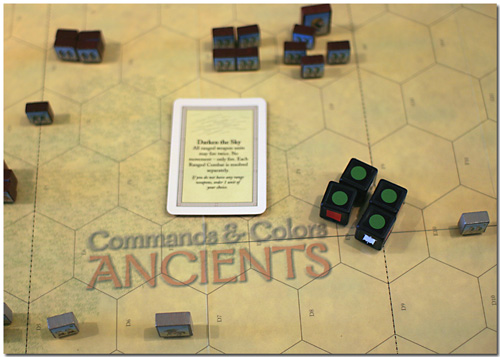 That roll, while an extreme example, was representative of the rest of my dice rolling in the game. Ken was very aggressive with his cavalry, trying to dart in on my flank and take out a unit, only to evade on my counter-attack the next turn. He did a lot of damage, but left four of my units at single strength, unable to finish the job.

We had about an hour left, so Ken suggested Carcassonne: the City. This is by far my favorite of the series, offering a nice mix of tactical and strategic play. It plays quickly with 2 players - about 50 minutes - and Ken pulled out a decisive victory. He got down some great farmers (or stewards or whatever they are called in this version) and 2 exceptional guards. 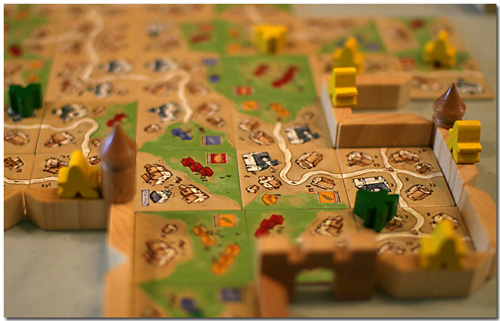 I feel like I could give away the rest of the series and just keep this one. The box is real nice too.