The Christmas holiday out at Salishan vastly exceeded my gaming expectations - almost everything I brought was played! Dave/Lisa, Mike, and Geoff were particularly eager to gobble up just about everything I suggested. Now we didn't spend all of our time indoors playing games - I'll post soon about a fabulous hike we took and a grueling "game" of pushups that I somehow got cajoled into. I'll do a quick rundown of the games we played.

Julie's high school friend Karen is a firefighter for US Forest Service - she's been a member of the hot shots crew and now works at an engine station in Mammoth, CA. She joined us up through Christmas eve but returned to Reno to join her family for the holiday. She asked for suggestions of games to purchase her 13 year-old nephew, and after some questions about his likes/dislikes I suggested Settlers of Catan. I picked up a copy at Rainy Day Games and hauled out my copy so that we could get some plays in to teach Karen. It was a big hit - the most popular game of the weekend. Turns out Geoff is the reigning champion in his lab group up at the University of Washington so he was already very familiar with the game. Settlers came out three times, and I played once. I wish I had brought out Seafarers and the Das Buch expansion as I think they would have enjoyed some other scenarios. 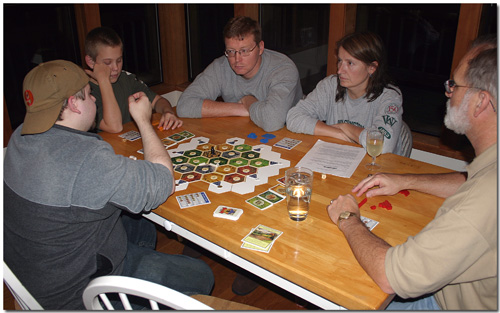 Of course we had to have a session of Havoc: the Hundred Years War. I didn't play but we had a nice crowd of 5 join in, with Jacob providing most of the instruction. 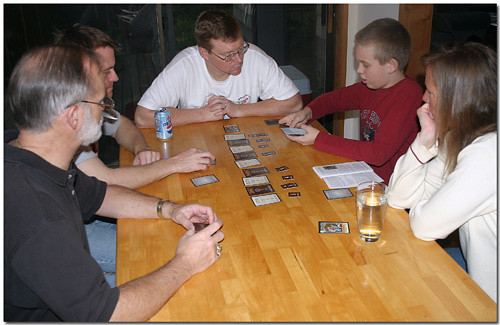 Matthew's big Christmas present this year was a Carabande set with the Action Set. These were long on my list of to-buy and fortunately KC came back with them from Essen. We had a team tournament over two races, including one with a figure-eight jump. 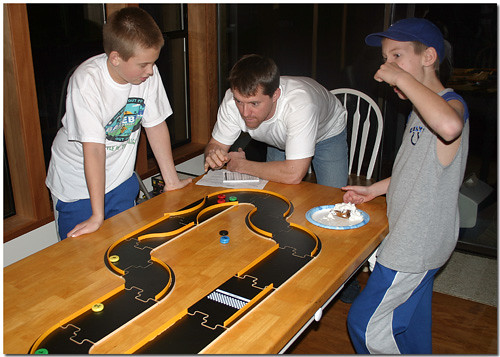 Not gaming related per-se, but another gift for Matthew was one of those air gun blasters. Here you see the effectiveness of the weapon at close range. 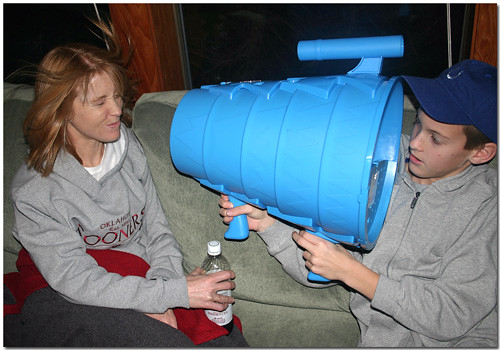 Having played and enjoyed Settlers, Union Pacific, and a few other heavier games, I thought Power Grid would be a good choice for this crowd. Mike took to it extremely well, challenging me for the lead throughout the game and winning on a tie-breaker with the most money (we each powered 16 cities). Power Grid is the kind of game that takes a full play to grasp the strategies, so the others were favorable but a bit confused on how to best play it. Would have been nice to give it another try. 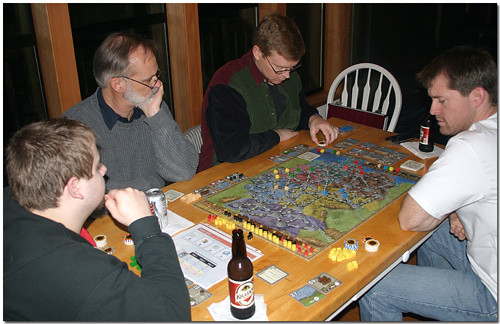 This was the game of Settlers that I managed to join. I made a sub-optimal opening placement that caused trouble throughout the game, though I had a fighting chance of finishing a close second (but didn't). Geoff played well and pulled off a relatively easy victory with Dave/Lisa finishing second. 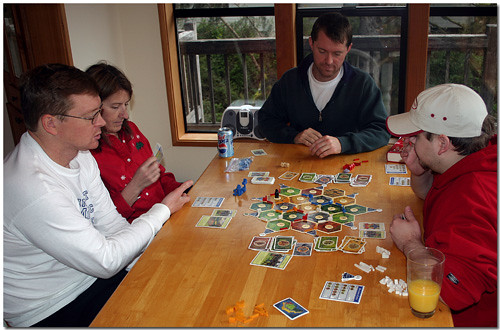 We also managed to get in some lighter games, such as Tunebaya. Tunebaya is similar to Wits and Wagers in that nobody is really all that interested in keeping score - the process of playing is the enjoyment. My obscure knowledge of music and lyrics continued to haunt me in this playing. 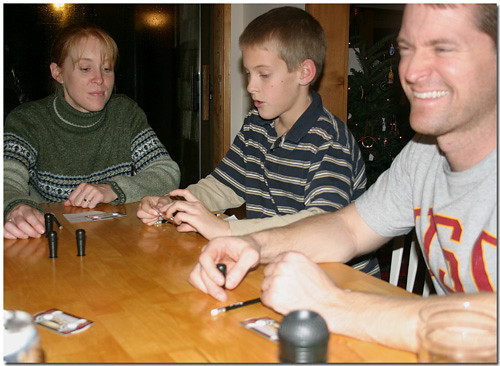 Matthew requested and the group delivered with a fine showing of Bang!, including the Dodge City expansion. I was an outlaw and was killed first (but not after hurting sheriff Jacob) but still managed to end up on the winning side. 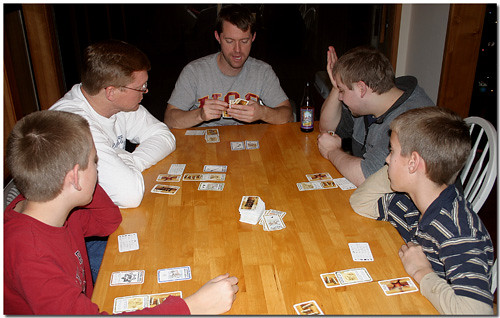 We also played a hand or two of 6 Nimmt… 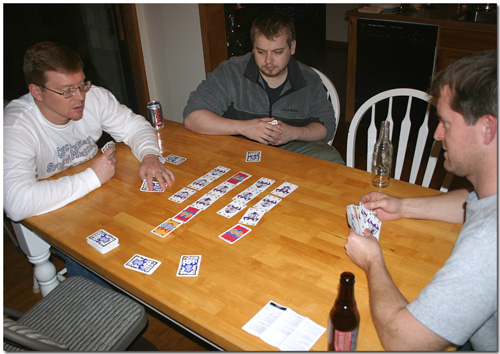 and two games of For Sale. 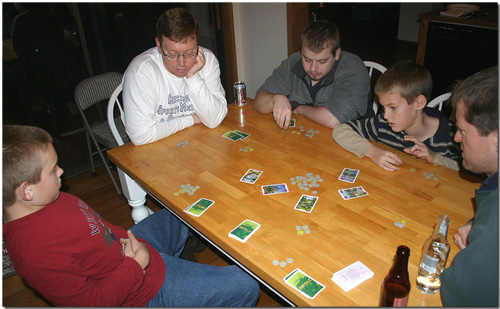 One of the highlights for me was finally getting a chance to play the Knizia classic Traumfabrik, the auction game about producing movies. The game has very simple mechanics, but is a bit dry and long for what you get. I enjoyed it but the group felt it was the least of the Settlers / Power Grid / Traumfabrik triad. Mike jumped out to an early lead, grabbing one of the first genre completed awards and two quarterly best picture awards. I managed to pull out a victory in the end by grabbing the best in genre and best director awards in the end. Scores were 30-25-15-10 (I think). 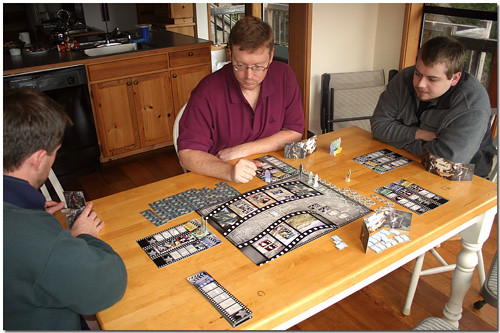 All in all, a great weekend of fun, family, and lots of games. Mike has been hosting a game group at his home in KC and I turned him onto the SimplyFun scene - he already put in a request for a party at home.