Tuesday night I hosted "south Tuesday", my monthly turn with the RipCity gaming group. I was eager to try out Antike again, and as I was expecting about 4-5 people total it seemed likely if the others were willing. Joining me were Mike, Doug, and Carey Grayson, guest of the group and owner of New Classic Games. Carey is a designer in his on right and purchased New Classic earlier this year. They produce Abagio and he has a few other games in the works for publication.

We played four players on the English side of the board, which is the "zoomed in" map focusing on the eastern Mediterranean and middle-east. Teaching Antike is a breeze - the game is very streamlined, combat couldn't be simpler, and the game board and reference cards are extremely well designed providing all of the key information for quick reference. 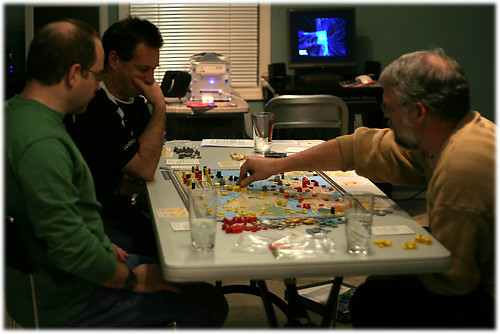 I focused on gold and know-how initially, advancing to Monarchy quickly to get some strong defense. Doug and Mike began to intrude on my precious territory, forcing me (!) to attack from Athens to push them back and give me some buffer. I didn't stop there, taking advantage of some numerical superiority and my sailing improvements to wreak some more havoc near Greece. I was able to cross the 15 territory threshold, giving me a total of 8 victory points (3 five territory, 1 seven seas, 4 first know-how advancement) and one shy of victory. 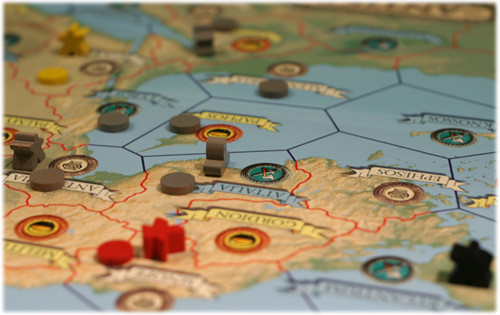 Meanwhile, Carey kept Doug and Mike occupied in the middle east, threatening some temples and forcing them to worry about two fronts. Mike quickly advanced to Democracy giving his cities plenty of defensive strength and discouraging conquest. The game was starting to drag on a bit, approaching the three hour mark (surprising as my first game lasted on 2 hours) and I was able to do a double advance from wheel to road and win the game snagging my fifth first advancement victory point. This was not quite fair as I had mistakenly indicated to Mike earlier in the game that you couldn't double-advance on a turn (there's no limit to the amount of advancement you can do when selecting know-how). I corrected myself and we all agreed that we'd rather just see the game end than restrain my advancement.

Great game still in my book and one I look forward to seeing come out frequently as long as we can get it done in the 2-2.5 hours time-frame. Three hours is too long for this game in my book.