There's been just a little bit of gaming around our household over the last few weeks. High time for a post with a few photos.

About a week ago I returned from a business trip in Memphis and joined Jacob, Nick, and Julie in a game of Ticket to Ride: Europe on a late Friday afternoon. Nick was new to Ticket to Ride but picked up the rules easily. Maybe there is some correlation with having two football players play the game, but this was the most confrontational game of TtR I've ever played. 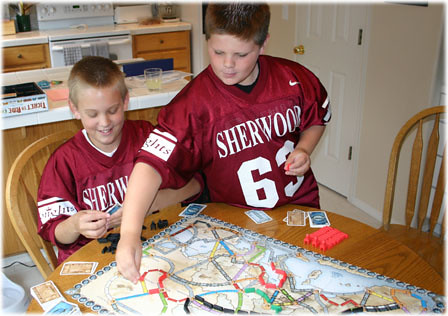 This was mostly due to Nick focusing on very small routes and doing whatever he could to disrupt our progress (mostly Julie, but he got after Jacob and me as well). While it wasn't very successful, it did make for an entertaining and tension-packed game (mostly positive energy) as Nick tried to figure out who to mess up next. I think he learned that this isn't really a viable strategy but he sure did have some fun along the way.

The next day KC and Rita joined us at our home for an overnight and some final planning for the launch of HAVOC: the Hundred Years War. We did manage to squeeze in a bit gaming though, including a couple of our new games from SimplyFun. Saturday night we played Walk the Dogs, my first play of it with the family. The kids really liked the game, though I somehow managed to pull off a surprise win by collecting five consecutive puppies. This is a pretty chaotic game but enjoyable nonetheless. 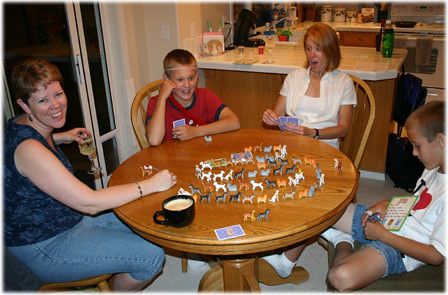 We also gave the junior version of Eye to Eye a try, and this was an even bigger hit. As easy to play as Apples to Apples, I think this game is a bit more fun. I you are a fan of Scattergories give this one a try. It does seem to be a bit overpriced for what you get, but maybe I'll find some other use for all those little wooden cubes.

On Sunday morning we played a 5-player game of Parthenon: Rise of the Aegean. We again were able to play in just over two hours and response was overwhelmingly positive. We did run into a kingmaker decision on the last turn, where Jacob was the Archon and could choose another player to damage pretty seriously (no commodity production that turn). He chose to hurt KC, possibly because KC had been a bit more vocal in stating his ability to win that turn (I was in the same position). This allowed me to win the game, but it was a hollow victory. 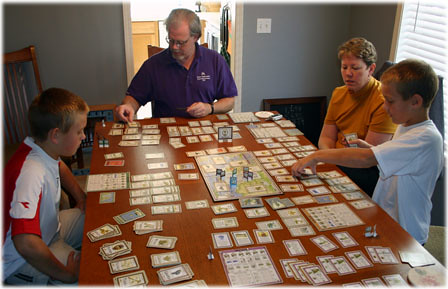 I coached Jacob a bit after the game, suggesting that it might have been better to hurt Matthew or Rita, who were unlikely to win that turn. This is a tough call and raises some concerns about the game, but maybe this was an unusual occurrence. In any case, we had fun and I look forward to playing again soon.