We had a family meeting Wednesday night and decided to do a game night Friday evening. Jacob and I will be on the coast at Adventure Cove camping with the Cub Scouts while Matthew and Julie will spend the week at Camp Ireland at day camp - we needed some time together with just the four of us. Consensus was to start with a light opener then tackle the new Days of Wonder release Shadows Over Camelot.

I was eager to finally try the light auction game For Sale. I recently picked up the Uberplay reprint and was able to teach the game in less than 5 minutes; we played in about 20.

Jacob, Julie, and Matthew during our game of For Sale.

This was a big hit! Jacob pulled out the victory with Julie and I close behind tied for second. Matthew wasn't that far back and everyone enjoyed it. I love games with a simple mechanic or two that can be played quickly. For Sale is played in two phases: first is the buying of properties, second is the selling. When buying properties, a number of cards are turned up equal to the number of players who then bid in clockwise fashion for the privilege of getting the best property. When a player passes he gives half of his bid (rounded up) to the bank and takes the worst available property. The player with the highest bid after all of the other players have passed pays the full amount of the bid and gets the best property. This is repeated until all of the properties have been auctioned.

Next comes the selling phase. In addition to the property cards, there are an equal number of "checks" that correspond to the income from selling cards. This phase starts with a random draw of a number of checks equal to the number of players - the checks are valued anywhere from 0 to $15,000. Each player secretly chooses a property to sell, then all players simultaneously reveal. The best property revealed gets the best check, and so on. Simple but elegent, this one should come out often.

We then decided to learn and play the new cooperative game Shadows Over Camelot. Coop games are generally a big hit in my family, and for many reasons I like Jacob and Matthew to play games where they work together rather than against each other.

Jacob and Matthew strategize in Shadows Over Camelot.

The production of this game is, as expected, first rate (read about the mechanics here). Learning the game was not trivial - I'm glad I was able to observe part of a session at work first, as learning from the rulebook was a bit challenging for everyone. We misplayed a few rules in our first game, and I suspect we are violating the spirit of the discussion/cooperation rules. Who cares - we had a blast. 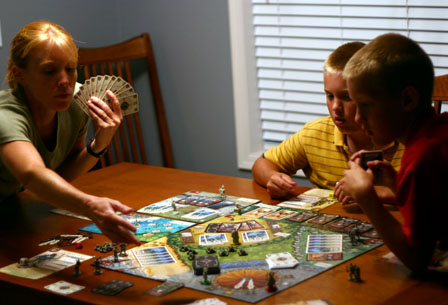 Julie, Jacob, and Matthew examining the board.

We lost our first game to the siege engines but it was close. Everyone wanted a re-match tonight (Saturday) so we gave it another try. It played much faster this time and we won fairly easily. In both games we played without the traitor - I wanted us to win as a group before introducing that element of the game. Next time we'll give it a try.