I'm well overdue on a number of session reports, including recent playtesting reports for KC's games. Hopefully this is part 1 of 3 posts I'll make tonight.

On November 13 I had several folks over at my home for our second round of guided playtesting. Afterwards people stayed around to play some more games.

Mike Deans brought along his new copy of Goldbrau, the brewfest game where players try to maximize profits by supplying the most beer to the most patrons in the beer garden. Fantastic theme and a nice looking game, but the game was ho-hum. 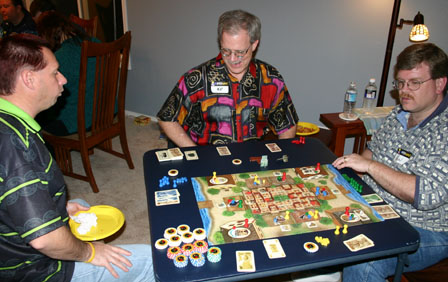 Mike, KC, Ken, and I try out Goldbrau

After the fact we learned that we played a number of rules incorrectly, so I'm anxious to try the game again to see if there's more to it. My biggest frustration was holding cards that I knew I would never be able to play. The second biggest was the try-and-out-guess-your-opponents mechanic (think Hoity Toity). I often ended up randomly choosing my action.

The kids played upstairs most of the day, spending a lot of time on our computers playing multi-player shooters and strategy games. They did take a break to set up a double HeroScape set for some 2 on 2 action. 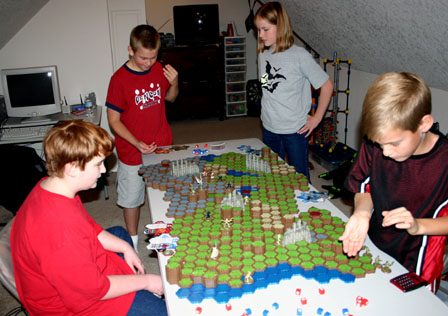 Brandon, Jacob, Jenna, and Matthew in the middle of a HeroScape battle. 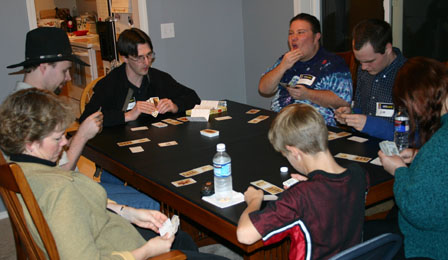 While I was playing Goldbrau, another group of seven played Bang!. See if you can guess who the sheriff is.

To close the evening out, KC, Rita, Ken, Julie, and I played Power Grid on the Germany map. I also had a chance to play this at work the Friday before, so it was nice to play again so quickly while the game was fresh. 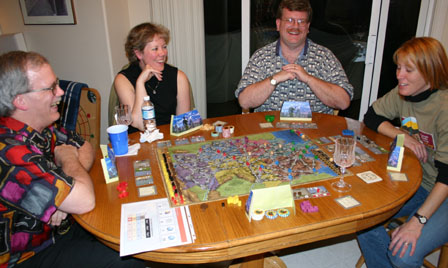 This game was very tight, with all of the players within striking distance throughout the game. KC had enough of an edge throughout that most of us figured he'd win unless he made a mistake - he came away with the victory. This is one my favorite games - I put it right up there with Wallenstein and Acquire among my favorites.

One game was played last weekend on Saturday that just have to mention - O Zoo Le Mio. This is an absolutely fantastic game to introduce folks to these board games. Matthew and I taught his friend Dayton how to play, and he immediately latched onto the theme and the mechanics made perfect sense. I gave him plenty of time to look at and try and arrange the tiles up for auction so that he could decide what to bid on. I put this game over Carcassonne, TransAmerica, and many others as a gateway game. 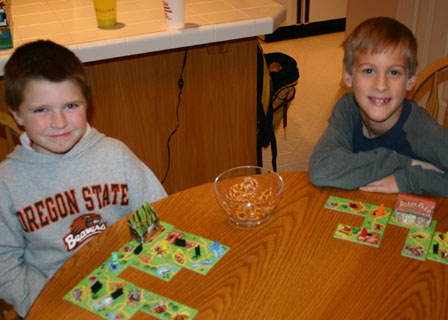 Dayton sporting his Beavers shirt (we were watching the civil war game while playing) as he and Matthew build up their zoos.