Jacob and I went over to Ken & Brandon's house this weekend to try out a two board game of Memoir '44 [Overlord] (http://www.memoir44.com/index.php?t=content&sub=overlord&rid=542&S=fe06f5b03ebbe53ffa5124a60e53ad87). Days of Wonder was kind enough to give me another copy of the game for my work at GenCon, and I gave this to the Rudes knowing how much they've enjoyed the game (and likely will enjoy it in the future).

Overlord is a style of play whereby one player on each team plays the role of commander-in-chief, governing the distribution of command cards to one or more field generals who are responsible for certain sections of the board. Ideally this version is played with 3 or 4 players on a side to allow for separate individual control of the left, center, and right sections. We decided to wing it a bit with 2 vs. 2, with decent results. 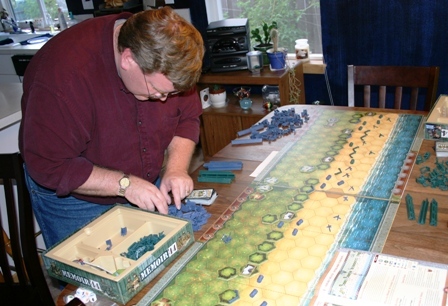 There is only one officially published overlord scenario Omaha Beach so that's what we played. Setup takes a while, around 15 minutes, but cleanup is even longer considering the co-mingling of the parts.

We adopted the overlord rules a bit for 2-player. We had one player take the role of commander-in-chief, deciding how to dole out the command cards. Jacob and Brandon wanted to team up, so in the first game they played the allies invading, while Ken and I played the Germans defending. Jacob and I were the respective commanders-in-chief. Brandon was in charge of the right flank and half of the center, Ken in charge of the left flank and half of the center (i.e., Ken and Brandon were facing off).

Each team starts with 8 command cards, and with certain restrictions up to three can be played in a given turn. The CIC decides what card(s) to give to his field general, and that field general is required to take what he is given. We were a bit lenient with Brandon and Jacob and allowed them to discuss cards, strategy, etc. Ken and I assumed there was very little direct conversation so our communication was mostly in the form of card distribution. This is a fairly tactical, reactive game in most cases so there isn't much room for discussion of grand strategy.

One flaw we believe there is in the overlord rules is the ability to use Recon command cards as if they were barrages. In both of our games (we played then switched sides), recon/barrage was used over 5 times to eliminate the allied armor and weakened infantry units. 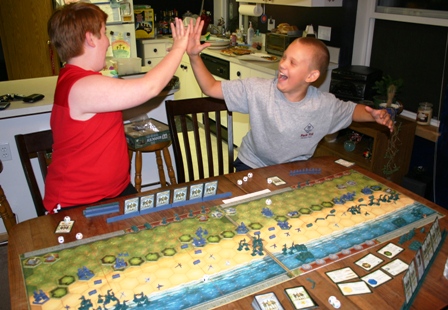 Jacob and Brandon celebrate their axis victory in game 2, winning 8-1.

In both games, the axis player was able to successfully defend Normandy. The first game, where Ken and I played the axis, was very close, ending in an 8-5 score. We were ahead 7-2 for a while, but the allies came storming back and made it a close game. The second game wasn't even close, partly due to poor die rolls and partly due to the use of recon/barrage by the axis on the first 5 turns of the game.

In future games we'll likely take out that rule, or only allow it to be used once in the game.

Overall this was very satisfying we completed 2 games and managed to complete setup and takedown in about 3 hours. I think the overlord scenarios will play best with at least 3v3, with the CIC playing the center section.