We were well overdue for hosting a game day at our house, so we opened our home on Sunday to a day of gaming with the ripcity folks and more. Turnout was outstanding Doug & Mimi, KC & Rita, Kevin Graham, Ken Rude, and Mike Deans were all on hand. Also joining us was Tim Isakson, a recent Portland transplant from Dallas. I gamed with Tim last year in Dallas, and Tim is already well acquainted with several folks in my gaming circle. 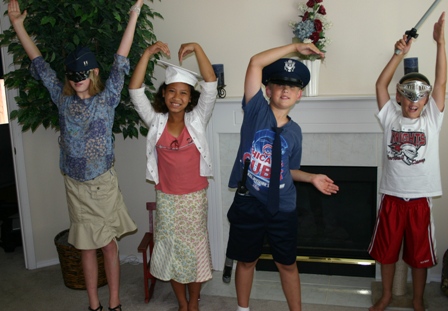 Jenna and Charisma provided plenty of entertainment for Jacob and Matthew. Here's their rendition of YMCA after a bit of dress-up play.

Doug, Mimi, Kevin, and Tim were first to arrive. I knew several others would be arriving shortly, so I set them up with La Strada and explained the rules. This is a very easy game to teach and is quite enjoyable (I've played it once so far), and response was favorable from the crew. The usual first reaction when someone finishes this game is "wow, I can't believe it's over already." It does play very quickly (about 20-30 minutes) and you can't sit idle waiting for your chance to score. Great enjoyment/time factor in this game though. Kevin was the victor with 26 points. 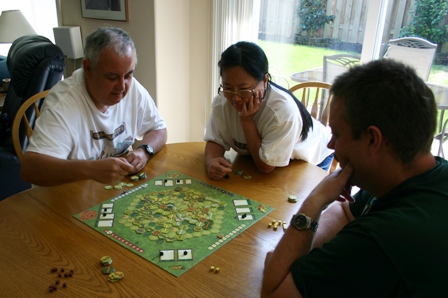 Kevin (the unknown gamer), Doug, Mimi, and Tim finishing up a game of La Strada.

KC, Rita, and Kevin arrived shortly after I started the La Strada game, and we brought out one of Rita's favorites: Gold Connection (see also this article) by Sid Sackson. This is a press-your-luck game ala Can't Stop, but with a bit more strategy. Players cruise around a series of gold vaults stealing gold bars and trying to build sets of a particular color (!) of gold. Within a vault, you can choose to steal as much gold as you like, but you must roll two dice and get a number higher than the sum of the face values on the gold bars plus the distance from your starting location. So if I'm 1 space away, and want to steal two bars of gold with 1 & 2, I need to roll a 4 (1 + 1 + 2). If you are successful, you get to add these to your collection. Fail and you not only lose those but any others you've accumulated this turn. You do get a consolation token if you fail, which can later be used to add to a die roll. 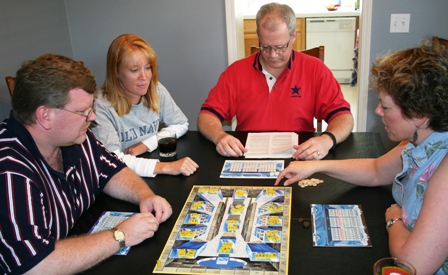 Ken, KC, Rita and I play Gold Connection as Julie looks on.

There's a bit more to the game than that, particularly around the scoring and building sequences within a color, but you get the idea. I was the winner this time. Very much a luck-driven game, but the same tension found in Can't Stop and I'd love to play this one again.

Doug, Mimi, Tim, and Kevin played Desert Oasis next. This is a solid game with 4 or 5 players. I taught this one to the group as nobody had played before; Doug pulled out the victory.

Ken, Julie, KC, Rita and I then played KC's card game Tres Amigos (and here). KC has made some great tweaks to this Euchre-style trick taking game themed with the great Chevy Chase movie. The reward for going nill (El Guapo) is not as high, and the player choosing this must take the turned-up trump card. This makes for a much more balanced game and creates tougher choices. In one case, I had a hand that I was fairly certain would win all the tricks. The challenge is you must bid with the highest card to get the right to score this way, which means you are giving up some hand strength. I didn't quite bit high enough, and Rita was able to overbid me and try and go for El Guapo. With my hand as strong as it was, it was a sure thing for her. In hindsight I should have layed down one of my higher cards; I take it out of the game and would still have taken 4 tricks easily. I still managed to win the game, though it was very close. 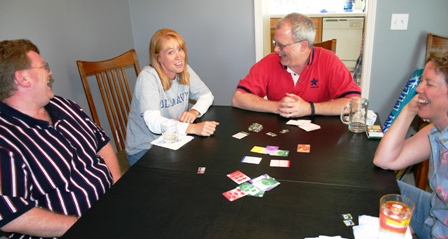 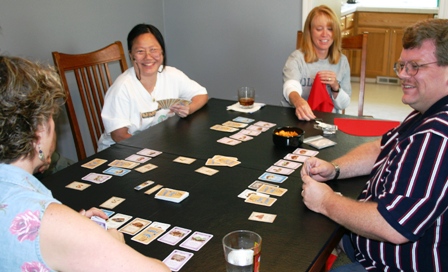 The one game I wanted to be sure to play was Goa, the new "gamer's game" designed by Ruediger Dorn. Goa has had very favorable reviews (currently ranked at about an 8 on the 'geek), and has the sort of depth I really like. Doug, Tim, and KC had all played before; Tim apparently A LOT, so I had some good teachers to bring me along.

When playing a game with this much depth, I typically tune out about half the rules explanation at the start, figuring that I'll learn as I go and folks will help be along the way. There's a learning curve for this game, but everything makes intuitive sense and the pieces fit together nicely.

Goa reminds me of Industria and Princes of the Renaissance. Auctions serve as the primary mechanic, and there appear to be many routes to victory. Like Puerto Rico, it seems (first blush not sure if this has proven itself) that a highly adaptive strategy is required. The best approach most likely will not be the same from game to game. I thought this game was much better than Industria though, and at least as good as Princes. I kept wanting to do more on my turn very tough choices.

A fumbled my way through the game and held up reasonably well. Tim was the runaway winner with 43 points, Doug 37, KC 36, and Chris 35. I can't wait to play this one again it is at least an 8 for me. 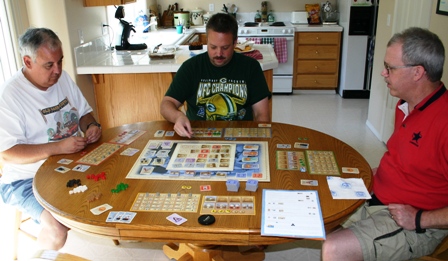 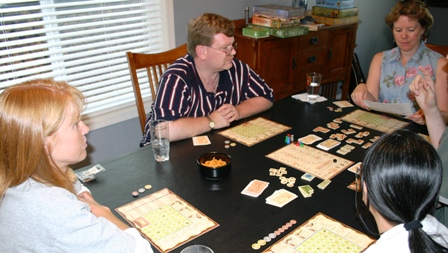 I was a bit disappointed to miss out on a playing of Princes of Florence, a game that has been sitting unplayed on my shelf for about six months. Kevin was the teacher and the winner. 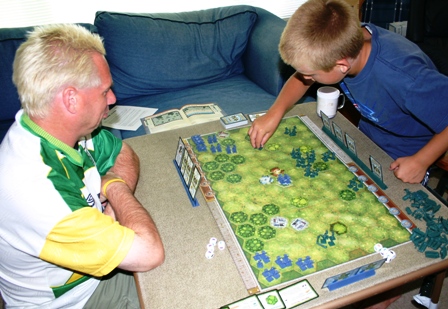 Mike showed up later in the afternoon after refing some soccer. He challenged Jacob to a home & home contest of Memoir '44. They played the Sainte Mere Eglise scenario, alternating Axis/Allies. Jacob won both times. According to Mike, "Jacob rolled lots of grenades, I rolled lots of flags." Sure...

My final game of the day was a first try at KC's latest card game titled Havoc. This is the most strategic card game KC has designed, and will likely become my favorite. I hope to get in a few plays at GenCon this coming weekend.

Players try to build their hands rummy style, trying to produce strong poker hands of up to six cards that will be used to fight a series of battles (the backdrop is the 100 years war). At any time on a player's turn, he can cry havoc and engage in the next battle. The winner of the battle will always win victory points, and depending on the battle 2nd, 3rd, 4th, etc. may also win points. When a havoc is declared, a player must play at least two cards that will end up as all or part of their poker hand. Each player in turn then either passes or lays down at least two cards. If a player opts out of the battle, he draws a card as consolation. Once all players pass, the played cards are compared for the best poker hand (6 card straight flush, 6 of a kind, etc. all the way down to high card). The best hand wins the battle.

KC also added an interesting twist the "dogs of war". In the midst of a battle, a player may play a special dog card that doesn't count toward the player's hand, but at the end of the battle can be used to fetch a visible card. A nice addition that adds a strategic element. 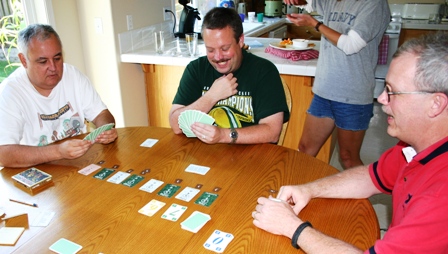 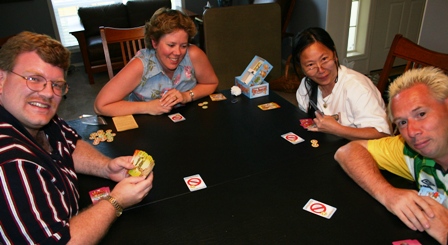 Ken, Rita, Mimi, and Mike play Too Many Cooks. This particular round was funny everyone bid to take no tricks! Ken was the victor.

Well, we were able to able to pack in a ton of high quality games in an afternoon. A nice prep for GenCon expect to see daily reports from me over the weekend.