Jacob and I spent Saturday afternoon at Kevin Graham's for some gaming. We picked up Ken and Brandon around 12:30 and arrived at Kevin's place on the east side around 1:10. Doug & Mimi, Matt Riley, and a few new (to me) folks were also present. 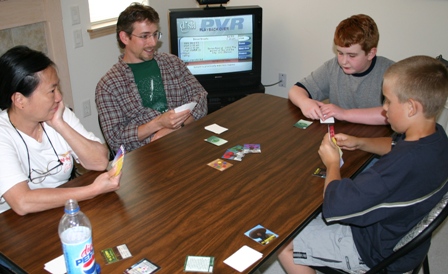 While waiting for a few new arrivals, I taught a small group KC's new prototype card game Tres Amigos. This is a light trick taking game that shows some real promise. El Guapo (going nil) still needs some work, but everyone had a good time. Jacob was the victor. 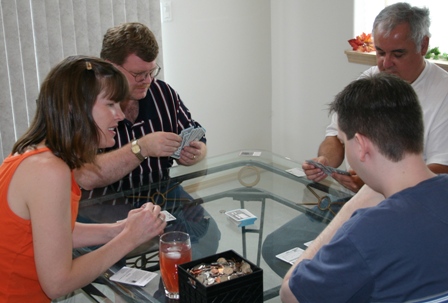 The other group played a game of Landlord. Ken is fond of this game. I've only played once and thought it was a fun diversion, but could take it or leave it. 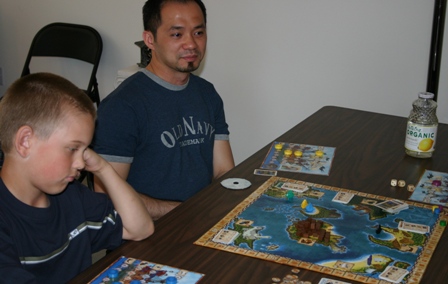 We then split into three groups (4/4/3). Jacob played a game of the Days of Wonder remake of Piratenbucht called Pirates Cove. 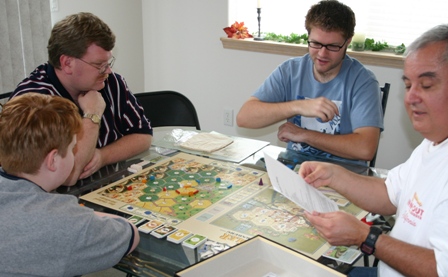 By far the longest game of the day was the Settlers of Nurnberg. Ken and Brandon both enjoyed this game which Doug managed to win. 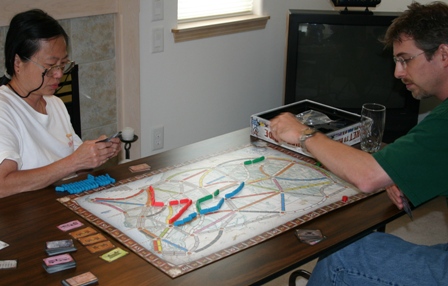 I played Ticket to Ride with Mimi and Matt. It seems that I'm pretty awful at this game, having played four times and never coming close to winning. Mimi crushed us, though Matt was in the running. Mimi and I also taught Matt how to play San Juan, and I fared a bit better there, winning soundly. 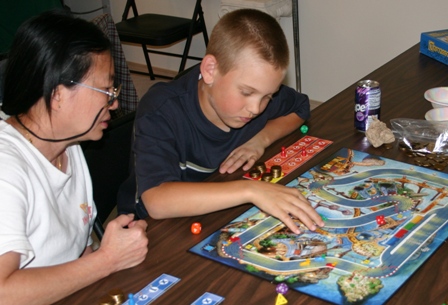 The Pirate group then brought out Formula De Mini. I don't know if they played with the alternate pit stop rules a requirement in my book. 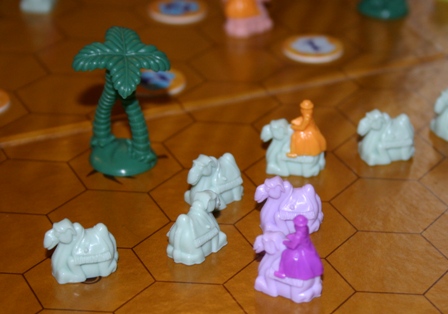 I had been hoping to play Through the Desert, a recent used game acquisition, so three of us took to the desert to give this fairly abstract game a try. I liked this game A LOT, though it ended quite quickly (we all seemed to be grabbing the same camel colors). Novice games like this (none of us had played it) are not very representative of typical play, so I hope to play again soon to see if my liking sticks. 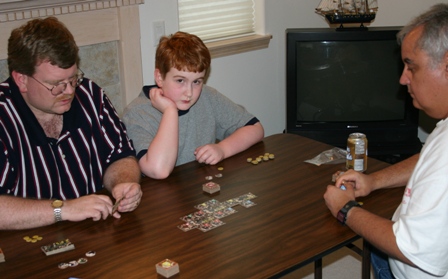 The day ended for us with a game of Kings Gate. This appears to be a solid, short, lightweight game. I picked it up from the judges' prize table at Game Storm and didn't expect it to be much. I'm pleasantly surprised, though we were playing wrong. Somehow I screwed up the rule about what it means for a location to be surrounded. We declared it surrounded once all of the orthogonal adjacencies were filled rather than all 10 squares (including the 4 diagonals). This obviously makes a huge difference, so I'll have to play again soon by the correct rules. It was still fun though...