Friday evening Jacob and I started our first game of Axis & Allies: D-Day, a game that we managed to finish tonight after his baseball game. Jacob played the Allies (USA and UK) while I took on the role of the Axis. 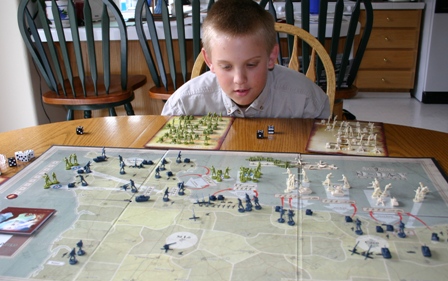 Jacob looking at the initial board setup.

The game starts furiously with Allied paratroopers dropping in to start the game, followed by shore bombardments and the first amphibious assault. Action is non-stop with little opportunity to avoid combat given the 10 turn time limit on the Allies. 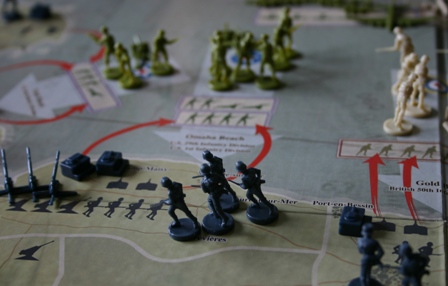 Thank you Hasbro for not making me take all of these pieces off the plastic trees. The game comes ready to play, though like most I was missing a few pieces (1 German tank, 1 UK infantry, 1 extra German infantry).

The order of the each turn is managed through Order Cards, which are turned over in succession each turn to call out the phases. This is a nice system if a bit tedious at times, though by removing cards that are no longer relevant as the game moves things start moving very quickly. Our first game lasted about 2 2.5 hours, but I suspect we will get it down to 90 minutes pretty easily. 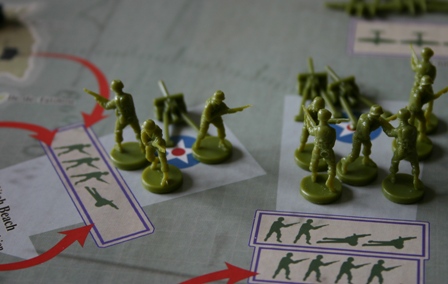 These Americans look ready to storm the beach.

This game is not for those who prefer to avoid dice rolling as with any A&A game, dice rolling is a major part of the game and can unwind even the greatest of plans. For my kids this is considered a bonus because it can also be a great equalizer.

One great component of this game is the use of patrol fighter aircraft that the Allied player can position on the board. These units do not attack like ground units, but rather wait for Axis ground units to move into our out of thier region. When they do, the aircraft get a shot at each unit moving, rolling a single d6 and eliminating that unit on a 1. At one point Jacob rolled 4 consecutive 1's, eliminating 4 of my tanks.

As I found in my playtesting, this game appears to be very well balanced with tons of tension throughout the game. The Allied player needs to capture three towns and hold them for a complete turn before the 10th turn ends, meaning they must capture by the 9th. While Jacob was routinely destroying my forces, he lost track of time and around turn 7 he realized his time crunch and starting getting more determined to achieve his victory conditions. Unfortunately for him St. Lo was too hotly contested and he was unable to extinguish my troops there in time to claim victory. After the game I gave him some advice on how to slow down my troops, use his tanks more effectively (the can move two regions per turn), and concentrate his forces a bit more effectively. 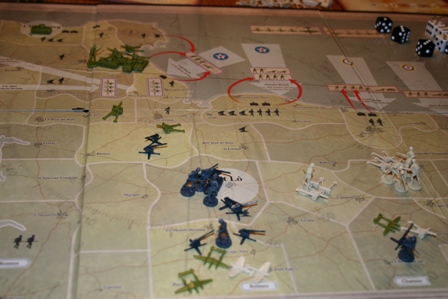 Final battle at St. Lo the Axis are victorious.

This game will come out frequently, and will be a perfect 3-player light wargame to play with Matthew and Jacob. If you are a fan of the A&A series but don't often have time for a full game, consider picking this one up.