This game sat on my shelf too long - in fact, it was the only "big box" game remaining in my game closet that I had yet to play. I know, compared to many that isn't a bad track record - I've seen a number of game collections with 10 or more games still in shrink wrap. Still, I'm a gamer not a collector and I want to play what I have. Ken Rude and I arranged a late evening during the week where we could get together to try this one out. Brandon, Ken's son, joined us for a three player game.

Serenissima is not a new game - it was released in 1996. I picked up because, well, I'm still a wargamer at heart and I find it hard to resist games that can be played in a single sitting but still harken back to the days of youth playing Avalon Hill war games. That's why Wallenstein is at the top of my list of games right now.

This is not exactly a wargame though - economy is at least as important, and it is through the trading and shipping of goods that money and ultimately victory points are earned. Each player takes on the role of one of the great nation-states on the Mediterranean - Venice, Genoa, Turkey, or Spain. In a three-player game, Turkey is not played. Each player starts with 2000 ducats, 10 sailors, and two galleys. Each turn starts with bids to determine player order. This turn order is used within each of the turn phases, which are:

Within each galley there are five holding slots, and these can be filled with any combination of sailors or trade goods as long as there is at least 1 sailor and no more than five total items on the galley. A ship's movement range is equivalent to the number of sailors. So it is clearly an advantage in both movement and combat to have more sailors on board; however, this will limit the number of trade goods that you can carry around. You can check out the complete rules right here. 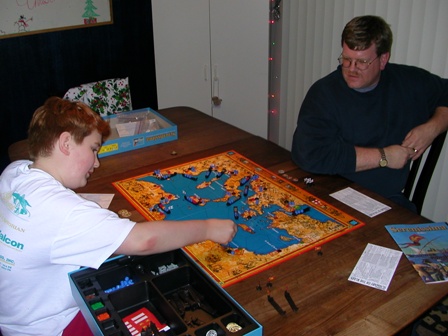 Ken played Genoa, Brandon was Spain, and I played Venice. Things started off nice a peaceful - I expanded east into Turkey and was getting a decent diversity of goods. Ken capitalized on some goods that Brandon had not yet traded yet in any of his ports by trading that good to his major town. Twice he earned a 1000 ducat bonus for these trades! While it helped brandon populate his major town with goods, this was clearly a good move for Ken since it allowed him to quickly get an advantage in both ships and sailors.

As so often happens in three player games, the first to get aggressive often pays dearly. I decided to attack an ill-defended port of Ken's (I believe it was one of his gold ports) and successfully capture it. Unfortunately it brought on his wrath and not only did I lose that port back to him the next turn, I also lost two ships in the vicinity.

Ken played very well - he intuitively figured out (I suspect now that this is a common game strategy) to diversify his fleet by keeping some trade ships around with few sailors (usually 2) while building a separate fleet of combat ships with 5 sailors each. These ships, with their extensive range, were able to wreak havoc on my ships and ports. We decided to cut the game a bit short (I think we played only 8 turns instead of 10), and though I did a pretty good job of holding off his final attack, he did manage to take a port away from me at the end. It didn't matter much though - Ken had filled a good portion of his medium ports (because of the shortened game, nobody got a completed large port) and beat us handily. I don't have the final scores in front of me, but Ken beat me by at least 10 points, with Brandon finishing behind me by about 10 points.

Fun game - I suspect it can be played in 2-3 hours and I look forward to playing it again. One criticism of the game is that it often follows the same pattern - trade or the first 2/3 of the game, then just start hammering the opponents by attacking. Ours certainly played out the same way. 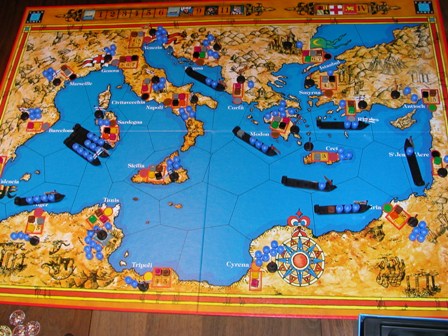