I was in New Orleans this week at a banking conference, but managed to squeeze in one evening of gaming with the Westbank Gamers thanks to a welcoming invitation from Greg Schloesser. I have followed his gaming group for the past year - Greg writes very entertaining session reports and is an extremely prolific writer / reviewer.

It took about 30 minutes to get to Greg's house via taxi from my hotel - I had to navigate for the driver and he made a few wrong turns. When I finally arrived I found a room full of gamers (at least 15 people) and was warmly greeted and introduced.

Greg has each table make detailed notes of the games played, so you should expect to see a session report from him soon after he returns from his vacation in Ireland. He also has all players rate the games played on a 1-10 scale. I like his model and may consider adopting it for my local game sessions.

Thanks to the group for inviting me and for providing such a welcoming atmosphere!

Princes of the Renaissance

I've been reading about this game in many of the session reports from Essen and was anxious to try it. There are some reviews and reports here, here, here, and here. I played with Jimbo, Dave, Jerry, Spouey, and Jason.

The basic idea in this game is to purchase, through auctions, characters in one of the five major cities in Italy. These characters will score victory points at the end of the game based on the relative status ranking of their city. Status can change through war or through the recruitment of artists that increase status. Play proceeds through three decades (each decade is a game phase that ends when all artists for that age have been purchased). Within the decade, play rotates clockwise with each player choosing a single action to take. Actions include putting a character or artist up for auction, recruiting a military unit, having one city attack another, or purchasing a treachery tile. Victory points can also be earned by winning battles and recruiting certain characters or artists.

I'm usually hesitant to think too much about strategy when learning a new game like this. Since this is an auction game, I decided to follow the tactic of trying to bid up some of the early auctions while not winning them myself - this can be dangerous if your bluff gets called, but I figured worst case I'll be accumulating some characters at a slight premium. It worked out well as I was able to snatch up some bargains at the tail ends of all three decades. Which leads to another point - especially with a six-player game, you truly never can tell when your last action of a decade will be. There are (I think) 4 artists available in each decade, and if players start snatching them up, the decade can end quickly. Since I chose a prince that gives a particular military bonus (artillery), I made sure I grabbed a few military units early on. This led to an arms race where about 75% of the military units were purchased in the first few actions. 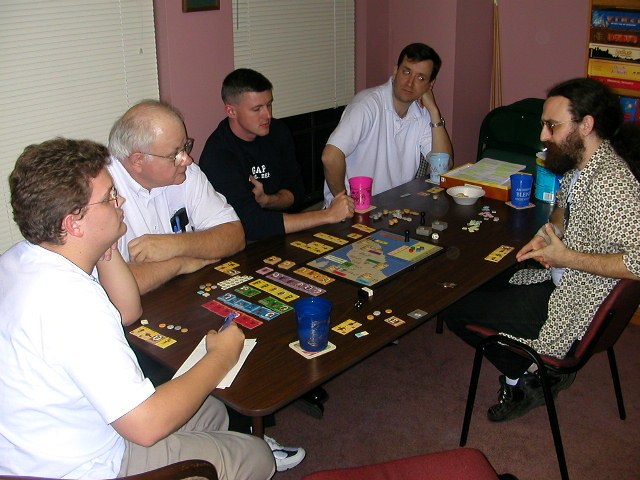 Someone had mentioned that in a previous game, the player that won had earned 10 VPs through military victory (the first win gives 1VP, the second 2 more, the third 3 more, etc.), so I figured a decent strategy would be to try and recruit at least 4 characters in the game, then use military force to elevate the status of their cities. To that end, I tried to ensure that the characters I recruited gave military bonuses of some sort.

Combat is interesting in this game. Players don't declare war against each other - rather, a player can force one city to attack another. Then players bid for the right to serve as the attacker or defender. There's little to lose in fighting, and much to gain, so bidding can be fierce. At the very least, you can make some profit if your bid ends up being less than the current status since the city pays the player that much to fight on their behalf (we are just mercenaries after all).

I was on the winning side of combat three times, and managed to hold 4 characters at the end of the game in the 2 highest cities. I managed to win with a score of 33. Other scores were Jerry-29, Jason-27, Jimbo-24, Dave-23, Spouey-18. I like this game a lot and will probably pick it up sometime over the holiday season - I rate it an 8 for now.

I'll post pictures for a few of the other games played without commentary - like I said, I'm sure Greg will write them up soon. 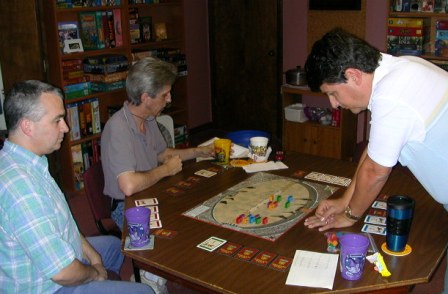 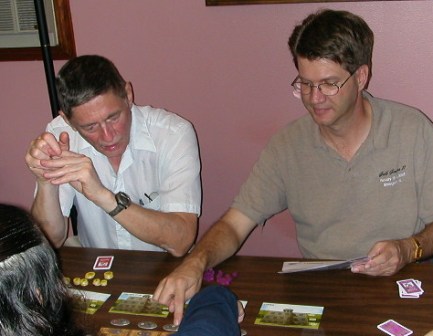 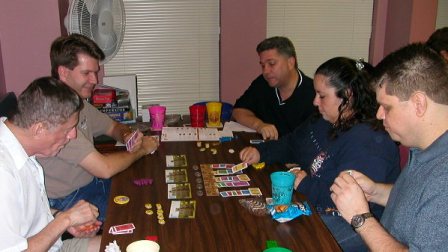 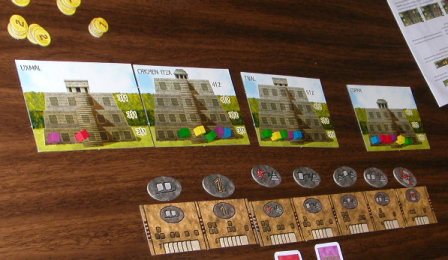 This one looks fun - I was hoping to get in on this game but the timing didn't work out. 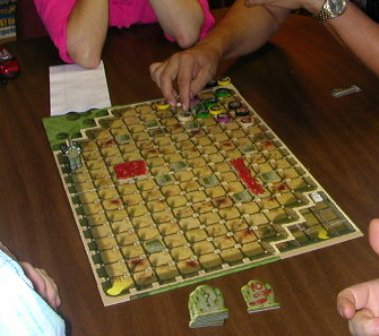 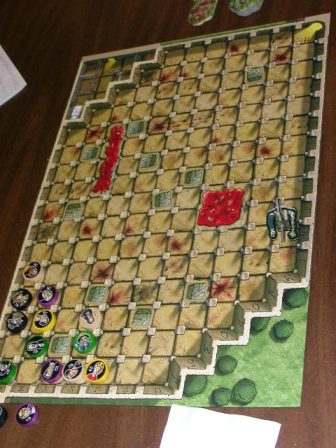 I just can't wait to see what sort of Google hits my weblog will start tracking after writing up this game. Unfortunate that they had to give the game this name - I suspect it will turn off some prospective buyers. It truly is a fun game! 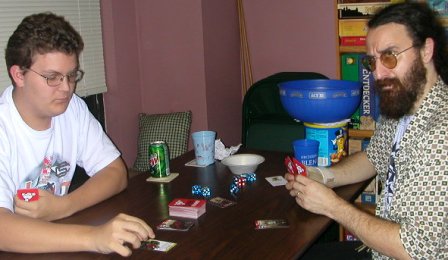 Jim, Jason and I decided to give this one a try. Very simple to learn, and very quick to play. I compare it to Flux in terms of chaos and variable game length, though there probably is a marginal amount of strategy hat can be applied in this game. The basic premise is to stack junk into a pile in a junkyard so that you can climb to the top of your stack and spank a monkey that is on his own pile of junk. And you want to do this before anyone else does. On your turn you can add or reinforce your own junk tower or try and knock pieces out of your opponents' tower. Jim and Jason each won a single game; I was winless. 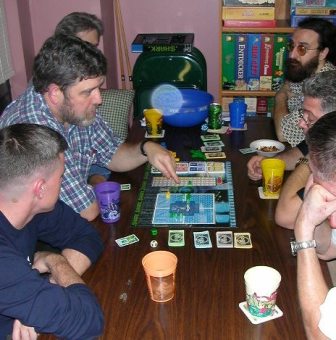 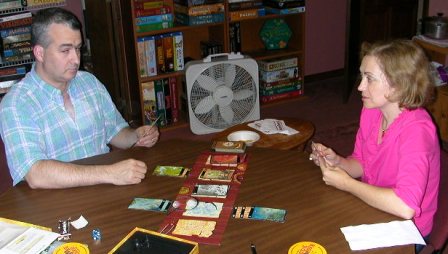 Greg and I finally managed to synch up to play a game together, and after some deliberation we decided to try Fantasy Pub, a game given to him at Essen so that he could write a review. It looked like a promising light game - players control a party of 7 fantasy characters (hobbits, dwarves, warriors, and an orc) that are trying to drink as much beer as possible in a pub. There are fiddly rules about how characters move around the pub, when they can drink beer, and how they can leave the pub. 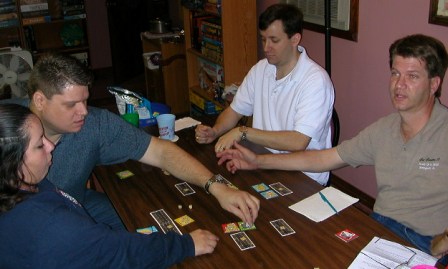 This game doesn't work with five players. We had serious lockup issues, and for such a light game the downtime was unbearable. Three different times I waited 5 minutes for my turn to happen, only to roll the dice to find that all I could do was rotate my hobbit around the bar one full cycle and achieve nothing. It just got too crowded to be able to apply any sort of strategy and turned into a dice fest. I'm not excited to play this one again, but if I was forced to I would make sure there were only 2 or 3 players in the game.

We wrapped up the evening with a short game of Die Sieben Siegel (the seven seals), a trick-taking game similar to spades or bridge. Players make bids of exactly how many of each suit they will take (no more or less), and there are some interesting twists that make this a winner for me. I grew up playing games like this (particularly spades and hearts and my grandparents' home), and given the choice between trick-taking and rummy style games, I think I prefer trick games. I will probably pick this one up. Shanna was on fire and won this game easily (we only played 2 hands). I was in second place not too far behind. 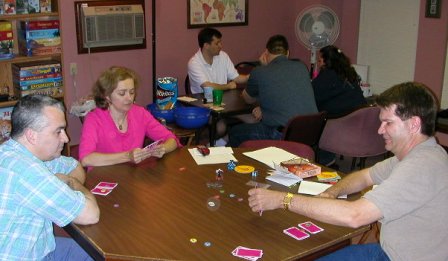