Late last summer I started to rethink my entire till chain for productivity. At the heart of my system resided Omnifocus, a productivity app centered on GTD that I’ve been using since the original beta. I love Omnifocus and still think it is the standard by which all todo apps should be measured.

I think I wanted a change because my environment was feeling sterile and detached. I had so many checklists and routines encoded in the app that I started to wonder if it was hindering my ability to explore or innovate. It can be tempting to wake up each day and check things off your lists and feel productive.

Around September I started bullet journaling, using my every handy Field Notes notebooks. I still relied on Omnifocus for administrative reminders, but began doing all of my planning and creative work in the handwritten journal. Not surprisingly this felt more visceral. I didn’t miss the digital reminders.

As items would pop up in Omnifocus (usually monthly, quarterly recurring tasks but sometimes just deferred tasks) I would challenge myself: is this reminder necessary? Could I automate it somehow to take the action away? Could I trust myself to remind me to do something when inspiration strikes?

Example: Julie and I have a lot of credit cards and one of the burdensome tasks was to pay them monthly and reconcile in YNAB. I took a few hours to first synchronize payment due dates for every card to the 15th of the month, then moved to auto-pay the full balance. At first this felt risky, but the beauty of using YNAB is that I’m assured of always having the cash on hand to pay the cards. I’ve never looked back and this took about 30 monthly tasks out of my list.

So from September to December I gradually weaned myself from Omnifocus and pivoted fully into the bullet journal. Then two devastating events happened: a larger bound notebook I was using for a consulting engagement was stolen, and my current Field Notes notebook went through the wash and turned into a ball of pulp. Recreating my action list wasn’t too hard, but the lost notes (about 60 pages) was at first terrifying. Turns out that the process of writing itself was usually adequate to trigger my memory and I landed on my feet mostly injury free. But it still hurt.

This prompted me to ask again: is this a system I can trust? Could there be another way?

Throughout the fall I’d also been exploring replacement options for my reference archive tool of choice: Bear. Bear has been good to me but hasn’t been without issues. The way it deals with Markdown in the text editing mode has always been a problem for me – a mixture of formatting without hiding the Markdown itself. And editing of hyperlinks is handled very poorly.

I should also mention: I’m not sure I want to stay in the iOS ecosystem forever so finding cross-platform options has become more appealing. Omnifocus and Bear are MacOS, iPadOS, and iOS only.

Jacob visited us in early October and showed me his latest tool fascination: Notion. I was mildly interested as it checked a few boxes for me:

Still, at the time I dismissed it because of concerns around lack of Bear import directly. It also felt a bit proprietary to me and I was worried (and still am) about my ability to get my information out of the tool if (really, when) I decide to leave.

November and early December had me continuing to look at reference archive apps while I blissfully continued bullet journaling. Then the disaster happened in early December and I knew I needed a cloud based solution. This is when I asked the question: could Notion serve as both my action and project list app and my reference archive? Time to find out.

I dove into the app but kept things simple. Rather than start manually importing all my Bear notes, I focused on task lists and starting to take new notes in the app, with a focus on my consulting. I stumbled through getting Notion structured in a way that would work for me, but it still wasn’t clicking for me. It was time to head to YouTube to see what others are doing.

This is when I found Marie Poulin’s amazing series on using Notion, with a focus on implementing the PARA method from Tiago Forte’s Building a Second Brain course. When I encountered that method I new nothing about it, but saw enough to be very curious. Could this be a method for combing my entire system into a single tool? Tiago originally designed PARA to work in Evernote, a tool I left about two years ago. They began charging more and more money for a tool with more bloat and lower performance. Lucky for me there is an emerging community of folks implementing PARA in Notion so it is easy to find the support I need.

I’m still figuring out all out. And I should say that Notion is far from perfect. They desperately need:

I’m dealing with the offline issues by relying heavily on the Drafts app for quick capture on mobile and desktop, including Siri reminders. This has made Drafts a sort of holding pen for potential actions and projects, in reality just an inbox in the GTD parlance. 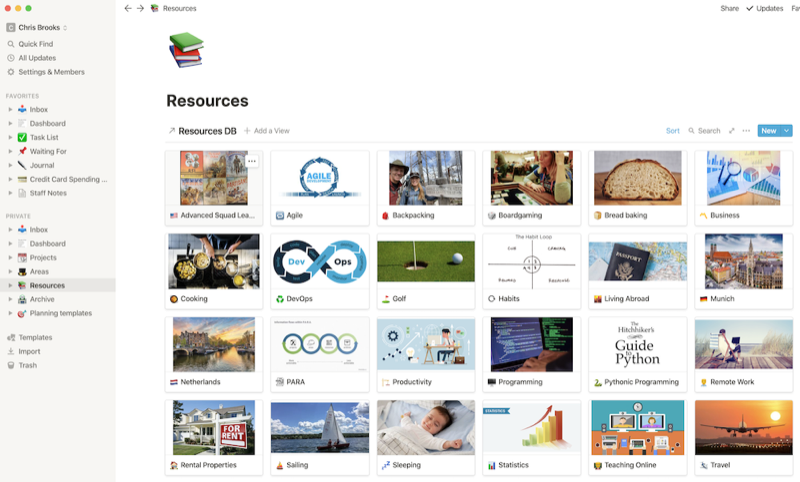 One thing I love love love about Notion is the ability to include images and card-based views. This brings me joy as I scan my project lists, areas of responsibility, etc. The screenshot above is my reference dashboard. Isn’t that pretty?

I’m certainly placing a bet on Notion’s roadmap as the feature gaps I mention above will be showstoppers for me eventually. 2020 has started with some nice baby steps so I’m hopeful.